In September 2019, we asked students how much they knew about the ongoing renovation of the D. H. Hill Jr. Library. Most knew the entrance to the Hill Library had changed and that there is a renovation going on. They found the signs pointing them to the new entrance useful. Most did not know any further details about the renovation. 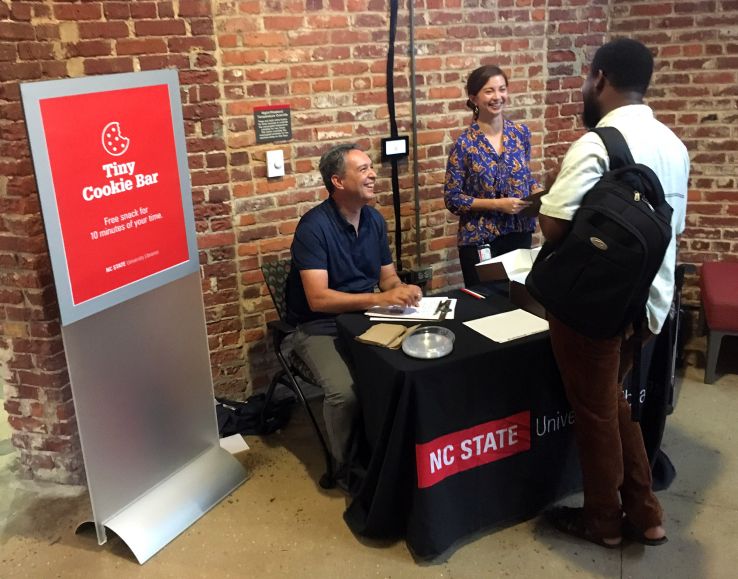 On September 5, 2019, we asked 27 participants a series of questions to find out how much they knew about the ongoing renovation of the D. H. Hill Jr. Library. We used the Tiny Café method in the Park Shops building on North Campus. Most of the participants knew the entrance to the Hill Library had changed and that there is a renovation going on. Most found the signs pointing them to the new entrance useful. Most did not know any further details about the renovation; a few did.

Of the 27 participants (who broadly represented the university population; read details below in “How we did it”) all but four had visited Hill Library in Fall 2019.

Twenty-one of the 23 that had visited, and two that just walked by, saw one or more of the signs outside the library directing people to the new entrance on Hillsborough Street. Most said the signs were helpful. Many of them described following the directions on the signs as “straightforward.” Three people told us the signs confused them, reporting “I was confused the first time,” “the map threw me off,” and “[the signs] confused me.”

Two thirds of the participants knew there was a renovation going on, the entrance had changed, and not much else. Those who knew more told us:

Five participants praised the appearance of the new Hillsborough Street entrance. This was interesting to us because we did not ask about this.

We asked participants if they had any trouble exiting Hill Library, as we anecdotal reports of visitors asking if there are other exits and using emergency exits. Most just said they exited where they came in and didn’t engage further with the question. A few did have more to say about exiting:

Quotes about the renovation

Given our interest in students’ knowledge of what is going on at the Hill Library, we asked participants how they usually hear about campus news. Eighteen of the 27 said email was an important source of information for them. They get emails from:

Despite the disruptions caused by a major renovation, most of the participants we talked to had positive things to say about the Hill Library.

We have put a lot of effort into wayfinding signage to help patrons find the new entrance, and that seems to have worked well. We should keep it up and make similar efforts in the future.

The Hill Library renovation will add a number of new spaces and services. Most of the students we talked to do not yet know what those are. We should consider how we could focus our messaging so that our audiences’ knowledge can increase from a general sense that there will be some new things at the Hill Library to knowing about one or two specific new offerings. Given what participants told us about how they learn about campus news, we could try to get our messages into email channels.

For two hours on the morning of September 5, 2019, in the Park Shops building on North Campus, we offered cookies, brownies, and apples to passersby for 5-10 minutes of their time. We chose to go outside the Libraries so that we could talk to at least some students who had not visited Hill Library since we closed the Brickyard entrance and put up signs to explain and promote the renovation. It worked; we talked to four students who had not visited Hill Library since the summer and others who go rarely enough that we likely would not have talked to them otherwise.

We used the Tiny Café format but changed the name to Tiny Cookie Bar because we didn’t want to offer coffee in such proximity to the Port City Java in the Park Shops building.

At the end of our questions, we gave participants an information sheet about the renovation.

We used the pictures below, printed on two pieces of paper, to ask participants if they remembered seeing signs: 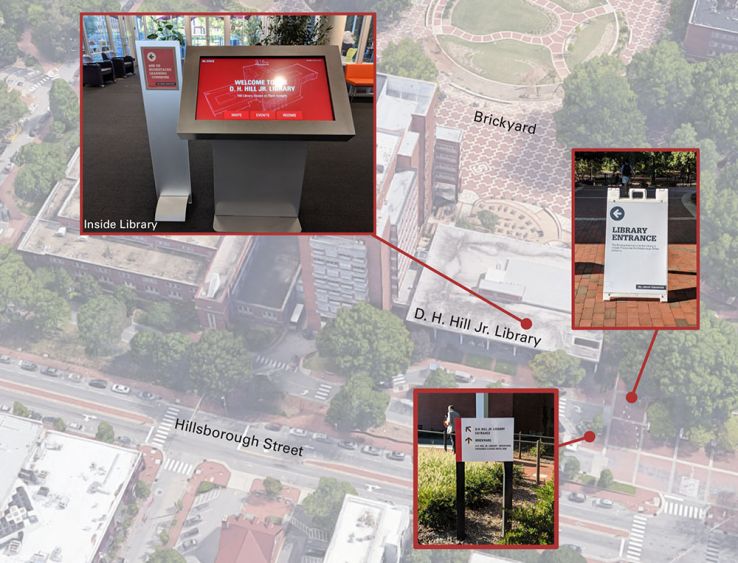 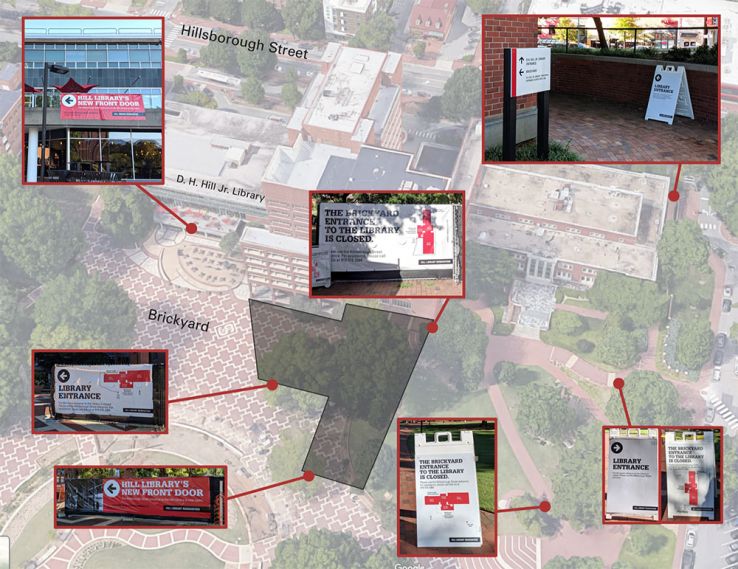