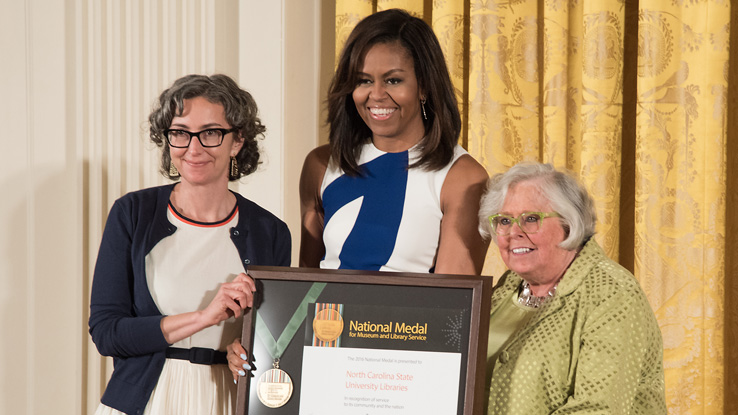 NCSU Libraries is the lone academic library among ten awardees chosen by the federal Institute of Museum and Library Services (IMLS) this year, as well as the first academic library to be recognized in a decade. The award is the nation’s highest honor for extraordinary public service, recognizing institutions that are valuable community anchors.

As Nutter and Gordon posed for photographs with the First Lady, a spokesperson read a brief narrative of NCSU Libraries’ community accomplishments, lauding programming such as Gordon’s involvement in screenings and panel discussions and her “Shooting Wars” visualization project for her War Documentaries class.

Nutter and Gordon were accompanied by Friends of the Library Board President Will Quick, who was recognized by IMLS Director Dr. Kathryn K. Matthew.

In addition to the medal, the Libraries receives $5,000, national recognition, and a visit from StoryCorps, a nonprofit that will capture stories from the NC State community and preserve them at the American Folklife Center at the Library of Congress.