As Professor Marsha Gordon walked through the gates of the Hunt Library for the first time and stood in the iPearl Immersion Theater—one of the building's large-scale visualization spaces—she immediately said, "We have to do the project here."

Gordon is an associate professor of film studies in the English Department and, over lunch with Librarian Jason Evans Groth a week earlier, she mentioned that maybe the Libraries could help with her spring semester class—English 585: War Documentaries. Gordon, like many talented NC State faculty, was exploring ways to make her classes more engaging. She wanted to develop a final project that got her students to take what they were studying and make it their own. "I want to do something big and visual," she said.

A month into the semester, Gordon and her students met Evans Groth at the Hunt Library. While the building is filled with a variety of collaboration spaces, all with unique technologies, they settled on the Game Lab as the place to host their project. As they filed in, Evans Groth gave them a rundown of the room's features: inputs that cascade up to eight different video signals across the 20' x 5' Christie® MicroTiles® display wall, the ability to interact with the wall like a touchscreen, and privacy made possible by the room's fogging windows—perfect for a visual exhibit featuring challenging, and sometimes disturbing, war imagery.

As they inspected the space, the students quickly grasped its many possibilities. Brian Robertson, one of Gordon's students, understood instantly why the Game Lab was appropriate for their project: "There were obviously questions of sensitivity due to the subject matter, but the fact that it…had the windows that could be fogged if necessary was great. It was pretty clear early on that it was going to be an ideal space for what we needed to do."

After their visit, Gordon allowed her students, and the Game Lab itself, to shape and define the project. Student Jason Buel noted that "the library space was pretty crucial in the sense that it offered not only a place to do the project but a place to kind of figure out what the project was even going to be."

The Class from NC State University Libraries on Vimeo.

Everyone eventually agreed that the project should take the form of a visual exhibit. Each exhibit piece would focus on an American military conflict (e.g. World War II, the Korean Conflict, the War on Terror) and would include multiple clips from documentary footage from each conflict, side-by-side on the screen, with a single soundtrack running over them. "We had three layered tracks," Gordon described, "image, sound, and text. Each panel had images, had text, and of course had sound that could have been related to it or completely divorced from it." According to Robertson, they "tried to find footage…that dealt with images of technologies in those wars, dealt with images of human suffering, and particularly death and [we] try to deal with them in a way that comments on the images."

Recognizing that the class was about film history, not about video production, and that she was asking quite a lot of her students for this project, Gordon decided to create an exhibit piece herself. This meaningful pedagogical gesture brought the class together in a very palpable way. Gordon now had as much to gain from the class as her students did, could empathize with their material and technical struggles, and would also be contributing—and paying attention—to the final outcome in a way very different from a professor simply coordinating and observing a project.

The Game Lab from NC State University Libraries on Vimeo.

Despite Gordon's innovative approach and the class's creative ideas, the project met with some very real obstacles. "The Hunt Library was only a year old at this point," said Evans Groth, "and the Game Lab had never been tested quite like this." Likewise, Gordon and her students were similarly uninitiated—very few of them had created video projects before, let alone videos meant for a 20'-wide display. "For me it was intimidating…but also very exciting," noted Robertson, "because film studies is really distinct from filmmaking. We don't learn editing software…we do history and theory and things like that."

"Everyone was really ecstatic about the way that it turned out"

To actually make this project happen, Gordon and her students played the roles of content creators and project directors, and, guided by the class's vision, Evans Groth served as the intermediary between them and the Game Lab, providing content guidelines and technical requirements and being honest about limitations. Using a range of softwares from Microsoft PowerPoint to Adobe Premier, he designed the templates for the class to create their video installation. Student Kenneth Pinion remarked that Evans Groth "put together a fantastic PowerPoint-based application for the ginormous monitor … and that's when everything got real." To support the students during the project's development, he also created documentation and tutorials to navigate the challenges and made himself available to help them through in any way he could.

The Project from NC State University Libraries on Vimeo.

As Professor Gordon and her students submitted their videos for testing on the Game Lab wall, Evan Groth sensed that something exciting was happening, that what this collaboration had produced was something utterly new. "We created something from nothing," he said. "These pieces had come together. And I was totally overwhelmed by this interpretation of war on a giant video wall." They had manipulated the high-tech environment in order to render the technology as invisible as possible, so the audience might engage with the powerful content in a direct and meaningful way. He couldn't wait for the class to see their final products.

"Jason Evans Groth put together a fantastic PowerPoint-based application for [the] ginormous monitor … and that's when everything got real."

On April 15, 2014, four months after the first consultation, the class arrived at the Game Lab to prepare for the exhibit's opening that evening. None of the students had seen their work on the giant screen, nor had they seen one another's final products.

According to Gordon, "everyone was really ecstatic about the way that it turned out." Each exhibit piece spanned all 20 feet of the wall, with three videos running side by side. In each piece, the video on the left showed images of the technology associated with each conflict; the video on the right showed images of death from that conflict; and the center video bridged the two with text or other analysis—either original words by the creator of the piece or collections of poems, quotes, or other research—strung together in a new way.

"It was really amazing," student Jason Buel remarked, "to see the way that everything finally [came] together." Each individual exhibit was brief, running three minutes or less, and a viewer could select a project from a menu by touching the screen. 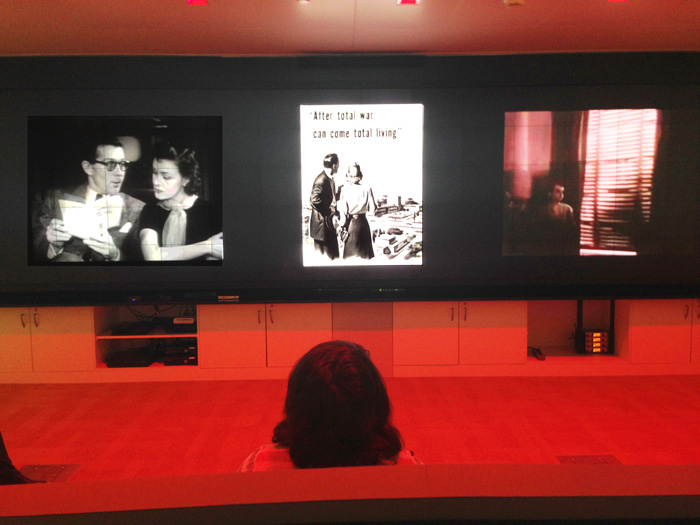 This format empowered viewers to decide which videos they would watch and in what order, creating the possibility of serendipitous meaning-making. And to supplement the interactive aspects of the exhibit, the students were available to speak to guests about their work.

For the two days following the opening event, students in Gordon's class were on hand to act as docents for any passersby. By the end of the second day, around 120 visitors—NC State University students, faculty, staff, and members of the general public—had interacted with the exhibit and its creators.

"I've never really thought of the library as a space for exhibition and distribution of these kinds of works, because it's kind of new"

This three-day experience encouraged Gordon to "think about how to use these spaces to create and disseminate knowledge in new ways and to talk to each other in ways that are maybe more open and more performative than I certainly have in my classes in the past."

For Buel, this way of publicizing research was novel: "I've never really thought of the library as a space for exhibition and distribution of these kinds of works." Robertson added that the product of their work felt more impactful "knowing that people were going see it outside of that class, that it was for more than a grade, that it might affect someone outside of what can feel like a pretty insular world."

Shooting Wars is a reminder of how important collaborations between librarians and the students and faculty they support truly are, and that, despite the fact that everyone brings their own expertise to the table, the distinctions between participants are blurred when everyone becomes a problem solver working toward the same end.

The Outcome from NC State University Libraries on Vimeo.