The NC State University Libraries Fellows Program offers new librarians a three-year appointment during which you develop expertise in a functional area and contribute to an initiative of strategic importance. Fellows perform as entry-level librarians with their time during the first 18 months being divided between a home department and an initiative of strategic importance in another area. The second 18 months will typically focus on areas that have emerged over the course of the Fellowship, taking into consideration both the Libraries’ needs and the  professional interests and goals of the Fellow. 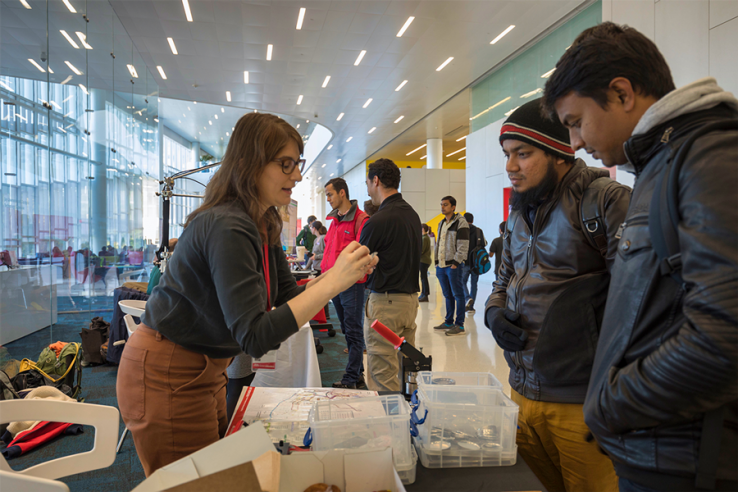 Over the course of three years, the Fellows assignments provide the opportunity for Fellows to contribute and lead in areas of strategic importance while also providing concrete, foundational, innovative opportunities for Fellows to interact with librarians from other departments and achieve at a professional level.

Each year, the Libraries’ departments submit proposals for potential Fellows assignments related to the Libraries’ major initiatives. Fellows have played central roles in many of the Libraries’ signature efforts such as Makerspace and Virtual Reality, Wolf Tales (campus oral histories), the Alt-Textbook project (open educational resources), Data Security and Analytics, and large-scale visualization.

A Culture of Collaboration

The Libraries' Fellows Advisory Committee works with current and past Fellows to coordinate and guide regular professional development and social engagement opportunities. They also provide a framework for the Fellows to interact informally and to develop a supportive peer network in the other nearby Triangle Research Libraries Network (TRLN) libraries and within the profession. 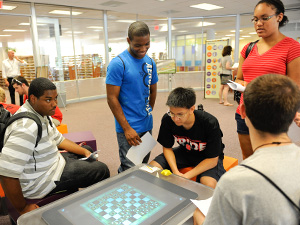 Several Fellows are hired each year, resulting in a cohort experience for each class. The Fellows Program is now entering its twenty-second year, with more than ninety total participants. This ever-growing list of former Fellows is yet another professional network to be accessed by those entering the program.

The NC State University Libraries is well known for its digital research and learning initiatives, technological advances such as immersive visualization, support for open scholarship, interdisciplinary teaching and learning, public engagement with research, and commitment to advancing equity, diversity, and inclusion -- all of which help to redefine the future of librarianship. Located on NC State’s Centennial Campus, the James B. Hunt Jr. Library, opened in 2013, is an iconic space where people gather to explore new ways to research, learn, experiment, collaborate, and affect the world. Designed as a working incubator for educational technology, this library features dynamic video walls, computing and visualization spaces, gaming and media labs, and group collaboration rooms, as well as two million print volumes housed in the bookBot, an automated storage and retrieval system. The Hunt Library serves as a second “main library,” complementing the D. H. Hill Jr. Library with services focused on the Centennial Campus community. Centennial Campus, adjacent to NC State’s main campus, includes the colleges of Engineering and Textiles, more than 75 science and technology research centers, and 60+ corporate, government, and non-profit partners. Fellows have played an integral role in providing new generations of library users with everything they can imagine and more.

The NC State University Libraries and its staff have won numerous awards, including the first Association of College and Research Libraries’ Excellence in Academic Libraries Award, the ACRL Librarian of the Year Award; the Stanford Prize for Innovation in Research Libraries and the American Institute of Architects/American Library Association Building Award for the Hunt Library; two John Cotton Dana Library Public Relations Awards; and Library Journal’s Librarian of the Year, Paraprofessional of the Year, and ten Movers and Shakers awards. The library system consists of the D. H. Hill Jr. Library, the James B. Hunt Jr. Library, and branch libraries for design, natural resources, and veterinary medicine.  With a staff of almost 300 FTE, the Libraries has more than 4.6 million volumes in its collection, acquires more than 62,000 print and electronic serials, and has a total annual budget of over $30 million. The Libraries is the host site for NC LIVE, a multi-type library initiative making digital resources accessible to North Carolina residents.

The NC State University Libraries has a longstanding commitment to equity, diversity, and inclusion and to the creation of a welcoming and inclusive service ethic and environment. Recent efforts include securing grant funding for outreach to diverse populations through programming and workshops. The Libraries collections also reflect this commitment, from focused collection efforts to locating, capturing, and preserving voices of underrepresented communities through archival research and practice. The Libraries has taken affirmative steps aimed at increasing diversity in the profession through the Fellows Program; participation in ARL’s diversity initiatives, including hosting five cohorts of Career Enhancement Fellows; and membership in the ACRL Diversity Alliance. The Libraries' Equity, Diversity, & Inclusion Committee is an active group that sponsors programs and fosters dialogue to promote understanding across racial and cultural lines in an atmosphere where all students, staff, and faculty are welcomed, valued, and respected.