When MLK met the KKK in Raleigh 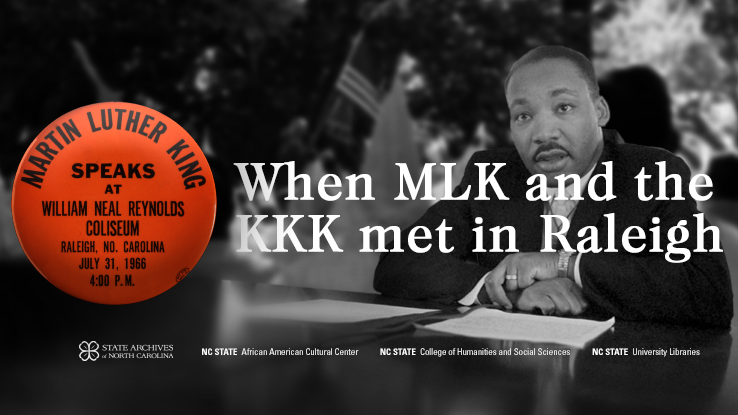 Most of us won’t soon forget the historically important moments that occurred in January 2021, from the attack on the Capitol to a transfer of presidential power in a politically divisive moment. Nonetheless, important moments are sometimes lost to history. "When MLK and the KKK Met in Raleigh," a new exhibit in the Hunt Library’s iPearl Immersion Theater, brings one such moment in NC State’s history back into the light, telling a story of racial tension that echoes within our current moment.

Dr. Martin Luther King, Jr. visited Reynolds Coliseum on July 31, 1966 to deliver a rousing speech. In a show of racist resistance, the Ku Klux Klan staged an 1,800-person march down Fayetteville Street in downtown Raleigh. The exhibit at Hunt tells the story of these events through never-before-developed photographs digitized from original negatives and first displayed at a gallery exhibit at the African American Cultural Center (AACC) at NC State.

So how did such a significant moment of racial conflict fade from our collective memory?

“The story of Dr. King’s appearance at Reynolds Coliseum on July 31, 1966 has gone virtually unknown by everyone in our campus community because of the larger atmosphere of racism that surrounded his actual visit,” notes exhibit organizer Jason Miller, an NC State English professor and noted King scholar.

“It is a critical story to tell now as so many are asking earnest questions about the history of white supremacy in our country. The KKK’s 1,800-person march down Fayetteville Street in Raleigh spotlights how racists moved freely and unchecked throughout the 1960s. Those energies do not just dissipate— they morph and transfer— braiding their way into the politics and fabric of life today.”

"When MLK and the KKK Met in Raleigh" builds upon Miller’s substantial King scholarship. Miller’s King's First Dream project unearthed the first-ever recording of the reverend's "I Have a Dream" speech which took place in Rocky Mount, NC, a full nine months before King's famous speech at the March on Washington in 1963. Miller partnered with the Libraries on work around the speech for the 2016 Experiencing King event, which also featured Miller’s documentary film Origin of the Dream. Miller is also a scholar of the poet and writer Langston Hughes, publishing a new biography with the University of Chicago Press.

For this exhibit, Miller uncovered the story of Dr. King’s visit, discovered the undeveloped photographs, and interviewed people who attended each rally. As the AACC’s inaugural Scholar-in Residence in 2019-20, Miller worked with the Center to show the photographs last January. The exhibit layout was developed by Kelsey Dufresne, a Communication, Rhetoric, and Digital Media Ph.D. candidate, and then enhanced and installed by John Robinson-Miller at the AACC.

Miller then worked with people throughout the Libraries to produce this digital version of the exhibit, as well as to document and archive his work in the Libraries' Special Collections Research Center. In addition to constructing the digital exhibit and conducting on-camera interviews of eyewitnesses, the Libraries also produced a replica of a button handed out in 1966 to announce King’s appearance.

“This collaboration represents the Libraries marshalling their vast resources to create new content,” he says. “This groundbreaking effort feels like it was born from the perfect subject—especially given this time in history. No scholar could hope to work with a finer group than the folks at the Libraries.”

The Libraries is also hosting an online event in its Campus History Series around the exhibit on Tuesday, Feb. 23 from 12:00 p.m.-1:00 p.m. in which Miller will discuss his research into King’s 1966 visit and the Klan march. The event is free and open to the public. Pre-registration is required.

Miller chose the exhibit’s images from a cache of over 150 negatives long-hidden in the State Archives of North Carolina. Brilliantly sunlit, KKK members in full regalia march downtown as onlookers—some holding protest signs, others appearing ambivalent—watch from the sidewalk.

“One of the most inspiring things I uncovered in conducting this research is that we were able to document the spontaneous counter-protest against the Klan rally,” Miller says. “Finding these photographs, digging through old press clippings, and speaking to those who attended the speech were the natural extension of my interest in documenting Dr. King.”

In addition to images of Dr. King in Reynolds Coliseum that evening, the exhibit also shows how the coverage of the events of the day skewed toward the Klan. For instance, The News and Observer sent eight photographers to cover the KKK rally and none to Reynolds Coliseum for King’s speech, and ran ads by four local churches denouncing King as both communist and anti-Christ.

“Their intentional desire to upstage Dr. King was largely successful as it stole the headlines and buried this event deep in our local citizen’s unconscious, reminding us of the parallel phenomena of repression and triggering,” Miller says, also noting that the Raleigh mayor’s office snubbed King (even though he had already won the Nobel Prize) and that no one from NC State even welcomed Dr. King to campus.

Miller is particularly proud that the exhibit also elaborates some of the lesser-known roles that women played in the Civil Rights movement.

“In catering Dr. King’s private meal when he came to Rocky Mount, Helen Gay later became the first city councilwoman in North Carolina,” he says. “Goldsboro’s own Dorothy Cotton worked closely with Dr. King during the last six years of his life, and Millie Dunn Veasey, a WWII veteran, actually housed King when he came to Raleigh in 1966.”

Besides a new awareness of an event in their local history, Miller hopes that visitors to the exhibit take away a new context for current racial struggles. “The beauty of an exhibit is that it allows viewers to co-create their own meaning,” he says. “Many will leave wondering if their relatives participated. Others will become curious about Dr. King’s other visits to North Carolina. However, one common realization has been that visitors start to realize how many people—besides the Klan—opposed King in 1966.”