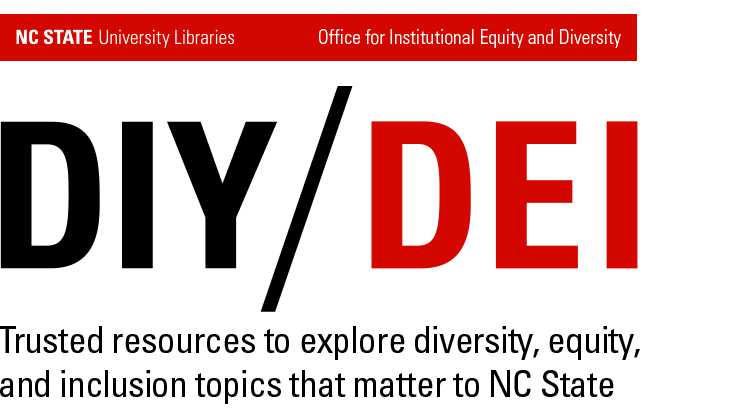 Advocates and allies are essential to promoting a culture of diversity, equity, and inclusion (DEI) in higher education and beyond. For many, there is a new awareness of issues associated with DEI and a growing desire to learn and engage. To support your efforts, the NC State University Libraries and the Office for Institutional Equity and Diversity have created a curated list of resources to inform your inquiry, introspection, and engagement with this topic. Engaging with these resources will provide you with an opportunity to explore DEI and develop your narrative and understanding.

Anti-racism is the practice of opposing racism in all manifestations while promoting racial tolerance. This issue of DIY/DEI focuses on anti-racism resources to help you go beyond the surface level to understand what anti-racism is in various aspects of society (including education). Within the various resources presented, you will gain opportunities for introspection and ideation for how you can work towards adopting an anti-racist mindset in your leadership, research, and everyday lives.

How to Be an Antiracist
Ibram X. Kendi
Ebook
“Kendi takes readers through a widening circle of antiracist ideas—from the most basic concepts to visionary possibilities—that will help readers see all forms of racism clearly, understand their poisonous consequences, and work to oppose them in our systems and in ourselves.”

Why Are All the Black Kids Sitting Together in the Cafeteria?
Beverly Daniel Tatum
Ebook
“Beverly Daniel Tatum, a renowned authority on the psychology of racism, argues that straight talk about our racial identities is essential if we are serious about enabling communication across racial and ethnic divides.”

How to Be Less Stupid about Race: On Racism, White Supremacy, and the Racial Divide
Crystal M. Fleming
Ebook
“Your essential guide to breaking through the half-truths and ridiculous misconceptions that have thoroughly corrupted the way race is represented in the classroom, pop culture, media, and politics.”

A Terrible Thing to Waste: Environmental Racism and Its Assault on the American Mind
Harriet A. Washington
Print
“From lead poisoning to toxic waste, Americans of color are disproportionately harmed by environmental hazards. This is detrimental to physical health—air pollution is linked with higher COVID-19 death rates, according to Harvard researchers. But Washington also argues that environmental racism is causing cognitive decline in communities of color. A deconstruction of IQ and an indictment of EPA rollbacks, A Terrible Thing to Waste is a stirring read.”

From the War on Poverty to the War on Crime: The Making of Mass Incarceration inAmerica
Elizabeth Hinton
Ebook, Print
“The origins of mass incarceration—which disproportionately puts black people behind bars—are often pinned on Ronald Reagan and Richard Nixon. But Hinton argues the carceral state was erected ‘by a consensus of liberals and conservatives who privileged punitive responses to urban problems as a reaction to the civil rights movement.’ The 1965 Law Enforcement Assistance Act, part of Lyndon Johnson's Great Society plan, led to today's police militarization. This account of history poses relevant questions for today's land of the free.”

So You Want to Talk About Race
Ijeoma Oluo
Ebook, Print
"Ijeoma Oluo’s New York Times bestseller shows people of all races how to have constructive and useful conversations about race in America. It answers questions about confronting friends and family members while providing a comprehensive education on this country’s racist heritage."

Me and White Supremacy: Combat Racism, Change the World, andBecome a Good Ancestor
Layla F. Saad
Ebook, Print
"What started as an Instagram challenge and a downloadable antiracist workbook encouraging people to examine their own privilege and racist behaviors now comes in book form with historical context, expanded definitions, and more resources. It has been widely recommended for white people who want to make change but don’t know where to start."

Blindspot: Hidden Biases of Good People
Mahzarin R. Banaji and Anthony G. Greenwald
Ebook, Print
"In Blindspot, the authors reveal hidden biases based on their experience with the Implicit Association Test, a method that has revolutionized the way scientists learn about the human mind and that gives us a glimpse into what lies within the metaphoric blindspot."

White Like Me: Race, Racism and White Privilege in America
Media Education Foundation
Streaming film
“In a stunning reassessment of the American ideal of meritocracy and claims that we've entered a post-racial society, Tim Wise offers a fascinating look back at the race-based white entitlement programs that built the American middle class”

I Rise
PBS, American Portrait
Streaming film
“Go inside the lives of people working to create an antiracist American future.”

Selma
Ava DuVernay
Streaming
"Although the Civil Rights Act of 1964 legally desegregated the South, discrimination was still rampant in certain areas, making it very difficult for Blacks to register to vote. In 1965, an Alabama city became the battleground in the fight for suffrage. Despite violent opposition, Dr.Martin Luther King Jr. (David Oyelowo) and his followers pressed forward on an epic march from Selma to Montgomery, and their efforts culminated with President Lyndon Johnson signing the Voting Rights Act of 1965."

13th
Ava DuVernay
Streaming
"The U.S. imprisons more people than any other country in the world, and a third of U.S. prisoners are Black. In this infuriating documentary, director Ava DuVernay argues that mass incarceration, Jim Crow, and slavery are "the three major racialized systems of control adopted in theUnited States to date."

Whose Streets?
Streaming
"The 2014 killing of 18-year-old Michael Brown by police in Ferguson, Mo.was one of the deaths that sparked the Black Lives Matter movement.Frustrated by media coverage of unrest in Ferguson, co-directors Sabaah Folayan and Damon Davis documented how locals felt aboutpolice in riot gear filling their neighborhoods with tear gas. As one resident says, "They don't tell you the fact that the police showed up to apeaceful candlelight vigil...and boxed them in, and forced them onto a QuikTrip lot."

“Pedagogies of strategic empathy: navigating through the emotional complexities of anti-racism in higher education”
Teaching in Higher Education
Michalinos Zembylas

“The Eyes of History Are Upon You: Toward a Theory of IntellectualReconstruction for Higher Education in a Post-Truth Era”
The Review of Higher Education
Z. W. Taylor and Richard J. Reddick

Floodlines
The Atlantic
"An audio documentary about the aftermath of Hurricane Katrina, Floodlines is told from the perspective of four New Orleanians still living with the consequences of governmental neglect. As COVID-19disproportionately infects and kills Americans of color, the story feels especially relevant. "As a person of color, you always have it in the back of your mind that the government really doesn't care about you," said self-described Katrina overcomer Alice Craft-Kerney."

Intersectionality Matters!
The African American Policy Forum
"Hosted by Kimberlé Crenshaw, a leading critical race theorist who coined the term "intersectionality," this podcast brings the academic term to life.Each episode brings together lively political organizers, journalists, and writers. The recent episode on COVID-19 in prisons and other areas of confinement is a must-listen."

Throughline
NPR
"Every week at Throughline, our pals Rund Abdelfatah and Ramtin Arablouei "go back in time to understand the present." To understand the history of systemic racism in America, we recommend "American Police,""Mass Incarceration," and "Milliken v. Bradley."

Code Switch
NPR
"It's the fearless conversations about race that you've been waiting for.Hosted by journalists of color, our podcast tackles the subject of race with empathy and humor. We explore how race affects every part of society—from politics and pop culture to history, food, and everything in between. This podcast makes all of us part of the conversation—because we're all part of the story. Code Switch was named Apple Podcasts' first-ever Show of the Year in 2020."

The Diversity Gap
Bethaney Wilkinson
"The Diversity Gap is for everyday people who want to pair their good intentions for diversity with true cultural change. Through thoughtful conversation and authentic storytelling, host Bethaney Wilkinson will inspire and equip you to create the kind of culture you say you want: one where all people are seen, heard, respected, and given what they need to thrive.

Be Antiracist with Ibram X. Kendi
Ibram X. Kendi
Be Antiracist imagines what an antiracist society might look like and how we all can play an active role in building one. Dr. Ibram X. Kendi is the author of How to Be an Antiracist, the book that spurred a nationwide conversation redefining what it means to be antiracist, and in this podcast, he guides listeners how they can identify and reject the racist systems hiding behind racial inequity and injustice. Alongside notable guests, Dr. Kendi continues his journey towards building a just and equitable world and proposes how we can all help create it with him.

A List of DEIA Resources for Higher Education
Choice Blogs, a publishing unit of the Association of College and Research Libraries