A century of the Technician 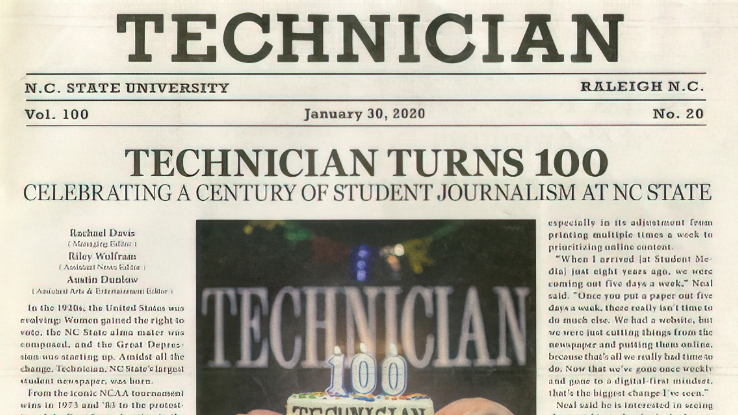 On February 1, 1920 an eight-person staff launched the first edition of the Technician with the words, “Smoothly, and with never a jerk or splash, but with an unerring, quiet movement, a strange ship casts off and the voyage is begun.” Over a century later, that ship is still sailing.

The four-page debut issue reported on a fire in Watauga Hall, a new dissecting laboratory for the Veterinary Department, and the establishment of a Department of Architecture. Thousands of issues and articles later, the Libraries’ exhibit “TECHNICIAN 100: Celebrating a Century of Student Journalism at NC State” tells the newspaper’s story through materials from our Special Collections Research Center (SCRC) as well as items on loan from many Student Media alumni.

Organized in collaboration with the Technician 100 Committee, the exhibit devotes cases in the Hill Library Exhibit Gallery to each decade in the paper’s history, highlighting developments in campus journalism and the student experience, and capturing the university’s history from a unique perspective. Currently, only those with NC State IDs are able to access the exhibit.

Early exhibit cases show the impact of WWI and WWII on the student body, while the 1960s case captures a snapshot of NC State’s mixed take on the Civil Rights Movement. Other cases reveal the racial strife on campus that led to the 1992 founding of NC State’s Black newspaper, the Nubian Message, and offer a look at the Technician today as a multi-platform news environment. Standalone cases are devoted to two of the most famous Technician grads, photojournalist Chris Hondros and USA Today founding visual editor Richard Curtis.

To have a look at Technician issues from throughout its first century, visit the Libraries' Rare & Unique Digital Collections: https://d.lib.ncsu.edu/collections/technician/.