“It’s Time for Us To Give Back” 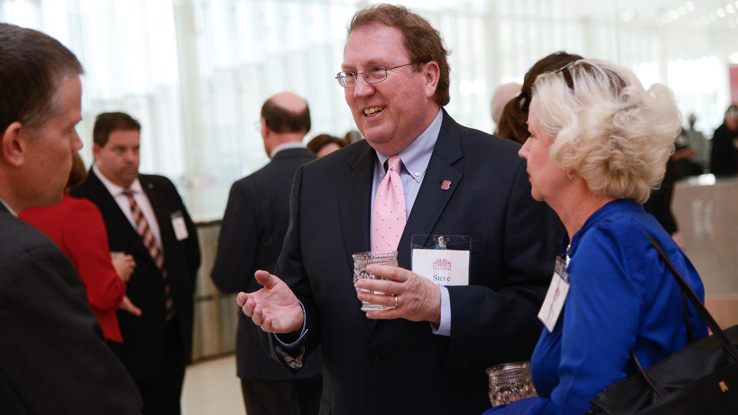 Steve Rea, as a young child, marveled over the fanciful “Tom Swift” adventure book series penned by Victor Applegate. Those pages full of giant robots, ultrasonic cycloplanes, and deep-sea hydrodomes inspired Rea’s career in engineering as well as his philanthropy to the NCSU Libraries.

Written in the early 1900s, the books were “thoroughly immersed in technology,” Rea recounts, “so they were talking about devices that hadn’t been made yet….the writer was very forward-thinking.” Rea credits those visionary stories as what led him to NC State where he received both his B.S. (‘80) and M.S. (‘87) in Mechanical Engineering.

Impressed with the James B. Hunt Jr. Library, Steve and his wife, Phyllis, decided to honor NC State by becoming donors to the NCSU Libraries in 2015, and since then have supported the Libraries broadly. Most significantly, the Reas established the Stephen and Phyllis Rea Endowment for Mechanical Engineering Collections in order to provide resources for all students, and particularly those in the College of Engineering, to prepare them for professional life after graduation. These resources are also useful for the university’s valuable, leading-edge research into traditional and renewable power production.

“I was looking for a way to make resources available that made sense for the power industry,” Steve says, reflecting on a 35-year career in that field, “that would benefit the mechanical engineering department, and would benefit the Libraries to educate young engineers who might then go on to work in the power industry. The tentacles from NC State reach deep, and we want to be a part of that with a long-term legacy.”

The Reas have committed to doubling the endowment size within the next five years. When asked about the importance of giving back to libraries, Phyllis reiterated, “Most of us don’t realize the significance of a library. Without a library, the university would be nothing.”

In February, the Libraries honored the Rea’s many contributions with a book plating ceremony in the Ragland Room of the Hunt Library. Steve and Phyllis were presented with a book plate bearing an image of a bird's-eye view looking down into NC State's nuclear reactor—a nod to Steve’s education in engineering, his distinguished career in the power industry, and to NC State for being a trailblazer in this field. FOL Board President Brian Boothe and Srinath Ekkad, Department Head of Mechanical and Aerospace Engineering, attended the ceremony along with Interim Vice Provost and Director of Libraries Greg Raschke and other members of the Libraries staff.

Steve’s leadership as a donor is unsurprising given his record of leadership at NC State. In addition to serving as Student Body Treasurer, Steve was active in the American Society of Mechanical Engineers (ASME), of which he served as Chair during his senior year. During that time, NC State’s chapter was the most active in the Southeast. Steve’s leadership with ASME was recognized by then-Governor Jim Hunt, who presented Steve with one of the state’s most prestigious awards, the Order of the Long Leaf Pine.

Steve and Governor Hunt were reunited at the D. H. Hill Jr. Library in 2014 when the Libraries celebrated the Student Leadership Initiative, in which both he and the Governor are featured. Steve sees great value in the Student Leadership project, as it exposes students to a wide array of people who built leadership skills at State and then successfully put them to use in their careers. “If students are motivated and curious,” he explains, “they will see so many different leadership models and the benefit of so many lessons learned.”

Through their endowment, contributions to the Hunt Library, and participation in the Libraries’ Student Leadership Initiative, the Reas have become broad supporters of the NCSU Libraries, which they see as one of NC State’s greatest assets. Steve now serves on the Friends of the Library Board of Directors, and represents the Libraries as part of NC State’s Think and Do the Extraordinary Campaign Cabinet.  Driven by tremendous gratitude for their education and professional success, Steve and Phyllis are reminded of Andrew Carnegie’s vision of a good life.

“When Carnegie got older,” says Steve, “he looked back and said it was good to spend the first third of your life on education, the second third working as hard as you can, and then in the last third giving back. Now,” he says, “it’s time for us to give back.”

For more information on how you can support the Libraries’ collections, please contact Leia Droll at 919-513-7033 or ledroll@ncsu.edu. To learn more about the NCSU Libraries’ Student Leadership Initiative, visit d.lib.ncsu.edu/student-leaders/.