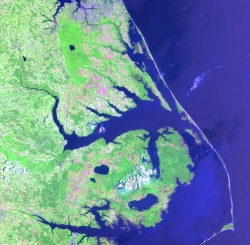 The US Geological Survey (USGS) now offers, at no cost, the entire Landsat archive online (as of December 2008). Orthorectified Landsat data are available for free download from the Global Visualization Viewer (GloVis) at https://glovis.usgs.gov/ and Earth Explorer at https://earthexplorer.usgs.gov/.

Additionally, a lot of Landsat and other satellite data may be downloaded for free from the Global Land Cover Facility(This link is broken. We're working on fixing it) (GLCF).

For more information about the Landsat program and data, see:

NC State University Libraries has a collection of select Landsat data as listed below. Unlike earlier Landsat data, there are no restrictions on redistribution.

The image below shows how the twelve scenes that cover North Carolina overlap. Notice that some locations are covered by as many as four scenes - Stanly County for example.

Click here for a larger version of this image

The North Carolina scene index is available as a shapefile in State Plane 1983 (meters) on the Geodata Server at ftp://gisdata.lib.ncsu.edu/landsat7/ or under \landsat7 by mapped drive.

One advantage of using these scenes, rather than searching for and downloading data from a data website, is that they have probably already been selected by someone as being cloud-free and of high quality. Also, they will be much easier to acquire than navigating the download websites.

Leaf-off data Leaf-off data dates range from Dec. 1999 to Mar. 2000 (one date per scene). A readme file briefly explains data organization. The data are currently available for NC State University access on the Geodata Server at ftp://gisdata.lib.ncsu.edu/landsat7/leafoff/19992000/ or path \landsat7\leafoff\19992000 by mapped drive.

Projection: All of these images are in UTM Zone 17 except:

The WGS84 ellipsoid is employed as the Earth model for coordinate transformation.

For each scene (path/row) there are 9 TIFF images--one for each band as indicated in the following table:

The last 3 characters of the filename stem (before .TIF) indicate the band. NOTE: Filenames are very long. It may be necessary to shorten the filename to use the data in some software.

There is a full set of 12 Landsat 7 images from 1999-2002 that covers North Carolina. Some of these data images were used to create the 2001 National Land Cover Database for the state.

There are 2 CDs of Landsat 7 ETM+ imagery from July 2004 for Path 16 Row 35, which covers roughly the central Piedmont area of NC excluding the southernmost counties. One image is a scan line corrector (SLC) off image, so it is gappy. Another image was used to fill the gaps. We have both the gappy and gapless images.

This batch of Landsat images were purchased cooperatively by Duke, UNC, and NC State University Libraries. The scenes are all for Path 16, Row 35, which extends from West of the Triad to East of the Triangle, North into southern Virginia, and South into the NC Sandhills. The purpose of this acquisition was a land cover change study at Duke.

The imagery is in standard National Land Archive Processing System (NLAPS) Data Format (NDF). Some are also in GeoTIFF format. Contact Data Services to discuss various options for converting these into other formats if needed.

The following dates are available on the Geodata Server at ftp://gisdata.lib.ncsu.edu/landsat7/P16R35/ or path \landsat7\P16R35\ by mapped drive.