Around the time of her memorial service, we solicited remembrances from people whose lives and careers drew upon Susan’s inspiration. Thanks to everyone who contributed their stories. We have posted them below.

Susan always had time to talk to librarians and library workers earlier in their careers. She urged them to break molds, to overcome fear of the unknown, and to develop and test new ideas. She mentored many, many people. I last saw her in action at the 2016 TRLN Management Academy where she took the time to have a kind of fireside chat with participants over lunch. She spoke about how she pushed against assumed boundaries and broke some rules early in her career and how important that was for them to think about. But not in the absence of ideas; she exhorted them to develop new ideas, to have opinions. It was inspirational to see her interact with the cohort of younger librarians and other professionals. Another memory I have of her was a conversation I once had with her about how she wanted the best staff and was willing to compete to get the talent she felt was necessary for NC State to excel. She was determined to make the Libraries and NC State itself succeed beyond expectations. What a force she was! I will miss seeing her here and there.

I've been struggling for the last week to come up with a fitting tribute for Susan Nutter. What do you say about the person who has had such an incredible impact on your life and career...on so many lives and careers? Volumes will be written about Susan's impact on NC State and the incredible reputation of its libraries and staff. So I will present another view. When I remember Susan, I will remember someone with more charisma in her little finger than most people have in their whole bodies. It could only be witnessed in her presence. She made you believe in libraries and in NC State's role in their future like no one could. I will also remember someone who cared deeply about families. The photos here are how I will picture her—teaching my daughter (now almost 21) how to make the "Wolfie" hand gesture at an NC State basketball game (my daughter still makes that gesture whenever she hears the word "Wolfpack"); and waving to my son and me at a baseball game attended by staff and their families (with husband Joe seated nearby). I will remember her as someone who always knew what she wanted and knew what was possible...and she usually got both. But I will remember her most through the incredible network of librarians she recruited, retained, or sent out into the world. 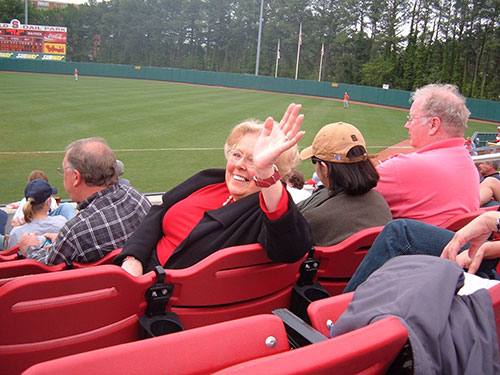 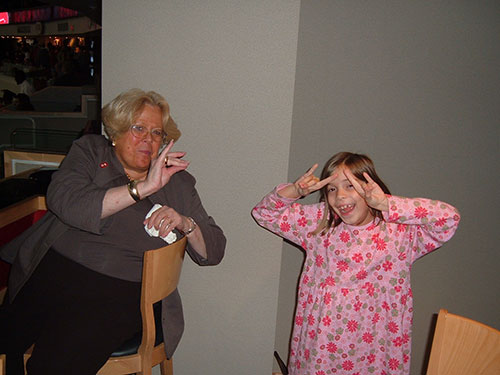 I hadn't seen Susan in several years, but I still think about her and NC State often. And I will think of the colleagues and friends that Susan and NC State brought together forever. The library world has lost a giant but at the same time has gained so much for having had her in our presence. Thank you, Susan. For everything.

Susan made time for students. As an undergrad and aspiring librarian, Susan met with me to share her experience in libraries and advise me on my professional journey. She was and will continue to be my inspiration. 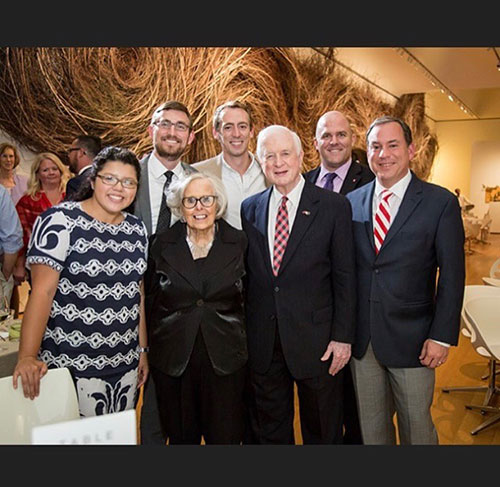 The first reception I went to as Student Body President was the May 2017 Commencement Dinner where I got to sit beside Susan. She gave me valuable advice and encouragement that I so desperately needed in that new role. The second event I went to was her retirement celebration. I got in line to say hello, thinking that I would have to reintroduce myself because I doubt she would have remembered me. I was mistaken. Susan grabbed my arm and said "I'm so glad you could make it, Jackie" and introduced me to her husband. It was a very small interaction, but to me, it was a perfect description of how Susan knew people. She was an absolutely legendary force, one I had the very brief honor of meeting. I will never forget her as one of the first administrators I met that graciously welcomed me, a stranger, like a long-lost friend.

I was fortunate enough to sit beside Ms. Nutter at a dinner in 2017 shortly before her retirement. After she introduced herself, I remember mentioning that I loved the third floor’s selection of books and had spent quite a lot of time browsing its stacks. She said, “Well, it’s going to be changing soon.” I was unaware of her importance at the time, but after serving on the Library Committee this year, and seeing the D. H. Hill Jr. Library renovation project begin in earnest, I have come to respect and cherish her contributions to our wonderful libraries. When the dinner ended, a line formed around our table to greet her. I began to think that this humble woman was much more important than she was letting on. 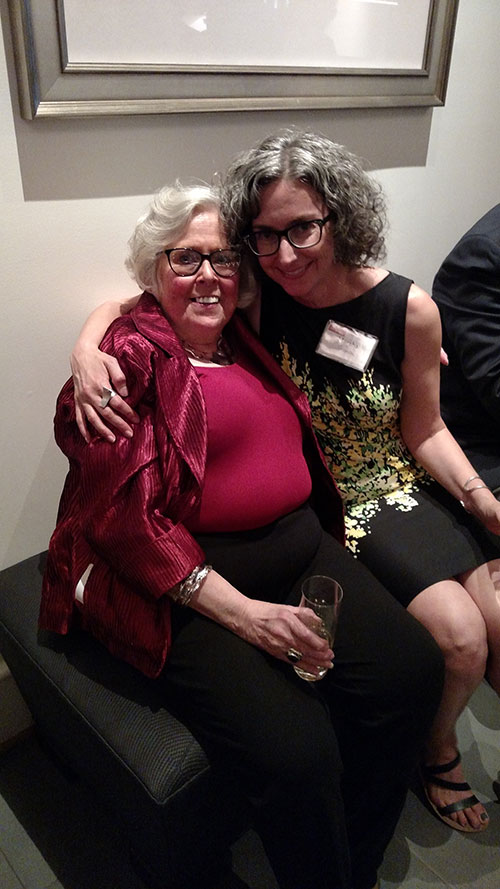 I was so fortunate to get to know Susan because of the work I've done over the years with my students at the Libraries. I had the privilege of going with her to Washington D.C. as part of a team who accepted the National Medal for Library Service on behalf of NC State. That was one of the highlights of my career, and I treasure that I got to see Susan at the very top of her game—accepting an award for a library system that she literally built from the ground up. The picture I include here is from an event at the Chancellor's residence to celebrate the award. What a legacy Susan leaves behind her at NC State—she transformed our campus for faculty, students, and the community around us. She was truly a mover and a shaker, but she was also a hoot—living life to its fullest.