The Innovation Studio is a new type of learning space for the Libraries that focuses on showcasing the innovative work of NC State’s students and faculty and teaching innovation methods to the campus community. We conducted a usability study and, based on the results, found ways to improve the accessibility and usability of the exhibit system and the space as a whole. 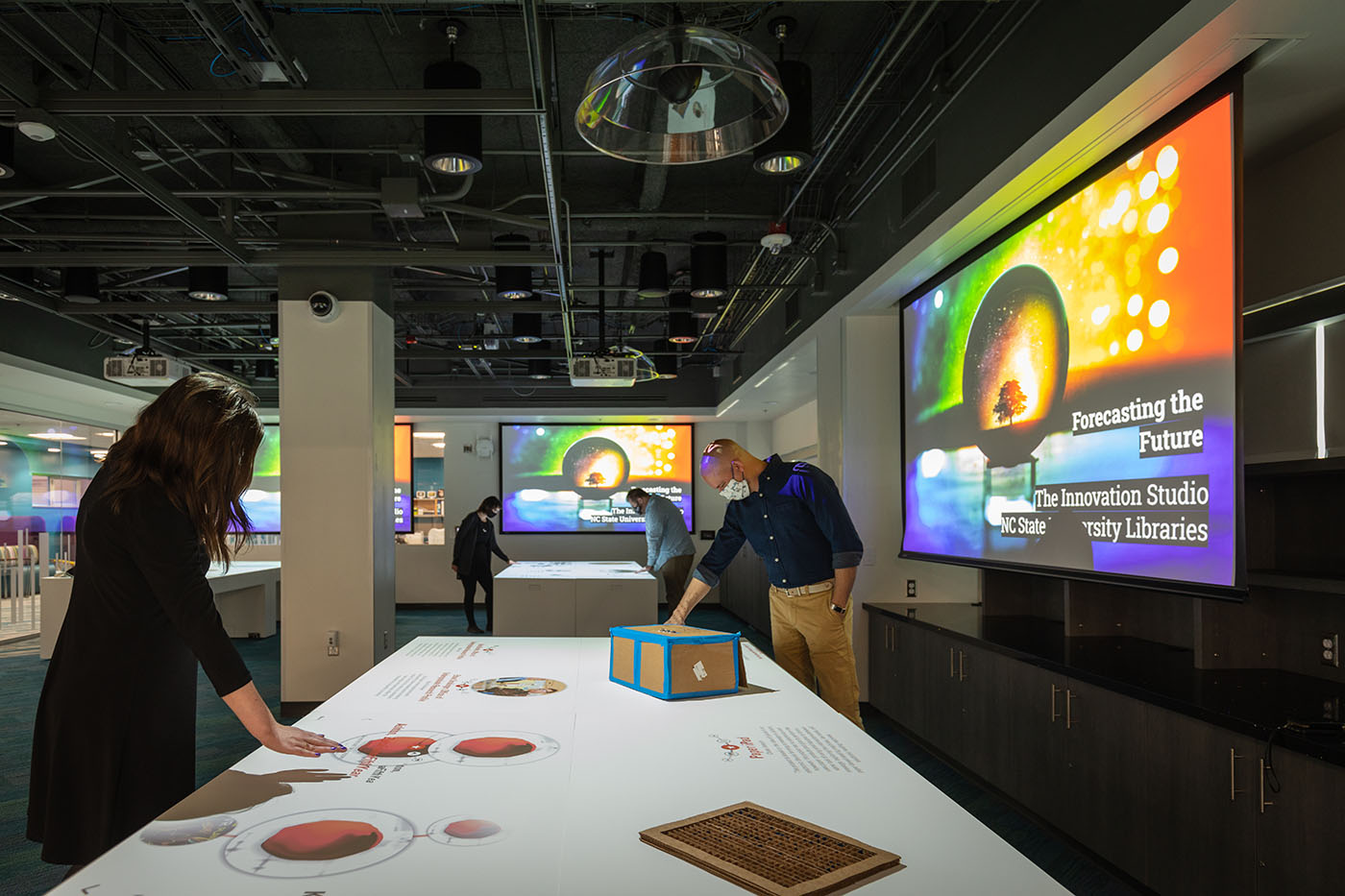 The Innovation Studio is a continuation of the Libraries’ efforts in curating impactful learning experiences. The Innovation Studio features a digital platform that continually highlights student and faculty innovations using a novel interactive projection experience and hand motion detection. The Libraries partnered with Relative Scale, a creative agency, to build this unique exhibit system.

The Innovation Studio was originally slated to open in Fall 2020. The COVID-19 pandemic required all of our collaboration in the previous spring and summer to be done remotely, and prevented us from doing in-person usability testing before launching the space. The Innovation Studio had a soft opening in November 2020 and a virtual launch in February 2021. We targeted Summer 2021 to finally conduct in-person usability testing and collaborate with Relative Scale on iterative improvements to the space’s user experience.

We wanted to know how easy or difficult it was for a user to navigate the exhibits at the Innovation Studio using the new hand motion detection technology. How does this experience feel to users? Are users able to intuit that the exhibits are gesture-based? What issues will users face? We also collected participants’ impressions of the space. Here’s what we found:

Participants had varying levels of understanding of the hand-activated controls.

Moreover, the “hover your hand here” command did not explicitly tell the user that all controls are hover-activated. It was also unclear how long users needed to hover.

Based on this finding, Innovation Studio staff have designed explanatory exhibit cards that users can take from a stand at the front of the space. This card includes more information about the Studio, including a cue for using hand-activated controls.

Every participant assumed the icon wheel, a feature of the interface that was a non-interactive navigation aid, was interactive.

Participants tried to touch or hover over the icons. When they found that it was unresponsive, they resorted to the arrows instead.

Based on this result, the designers at Relative Scale have updated the design to appear less interactive by removing button-like outlines.

Some participants conflated the “Previous”/”Next” buttons in the image gallery with forward/back arrows that navigated sections.

They assumed these buttons did the same thing, but their navigation purposes were different.

Based on this finding, Relative Scale designers have revised the text on these buttons to say “Previous image” and “Next image.”

It wasn’t always clear whether people could enter the space.

Based on this observation, Innovation Studio staff have updated their opening procedures to fully open the movable glass wall at the front of the studio and to increase the lighting in the space. Additionally, they are exploring the use of a “Come in!” sign at the entrance to encourage people to enter the space.

Overall, participants had positive reactions to the space.

Truly innovative: no participants reported that they’d seen a similar hover-activated system before. They understood the purpose of the space, and every participant described it as “cool.”

On June 30 and July 1, 2021, we invited four students into the Innovation Studio for individual sessions. They took part in a usability study and a “scavenger hunt” as a form of guided exploration. Throughout the sessions, we recorded video of their use of the exhibit system. The goal of our user research was to assess the usability of the exhibit system software and identify any issues. Additionally, we collected participants’ impressions of the space.