Visualization with a conscience 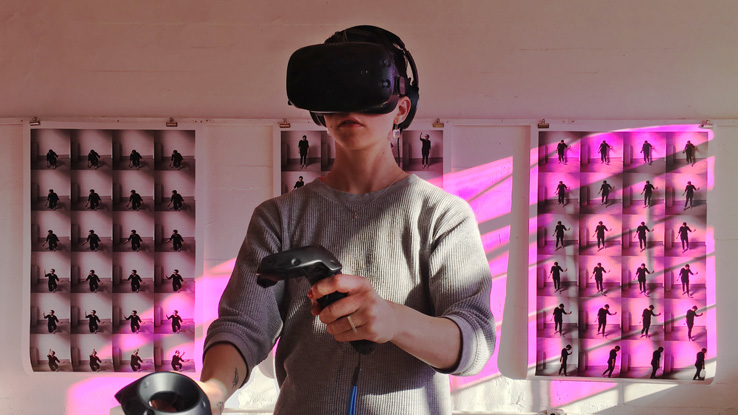 Keep your eye on the video walls at the Hunt Library this fall. You’ll see events and exhibits information and content from student contests as usual. But you’ll also see #MeToo data generating stained glass window designs and poverty statistics shaping the plumage of birds of paradise. Data has never looked so good.

Three resident artists will create these spectacular visualizations through the NCSU Libraries’ Immersive Scholars program, part of a $414,000 project grant awarded to NC State by the Andrew W. Mellon Foundation last year. The grant project, entitled “Visualizing Digital Scholarship in Libraries and Learning Spaces,” continues the Libraries’ pioneering work with large-scale, research visualization technologies and supports the advancement of tools and techniques for developing and sharing such visual content for research.

Artists, scholars, and creative technologists submitted project proposals to an open call in January for a four-to-six-week residency. Two of the three eventual residents have been chosen. Their projects will use data creatively, in collaboration with librarians, to produce immersive scholarly visual content for one or more of the large-scale digital walls in the Hunt Library—including the Art Wall, the iPearl Immersion Theater, the Commons Wall, and the Visualization Wall.

Data + visualization = storytelling
For the Libraries, the program offers a way to move large-scale visualization forward as a still-emerging research field. For the resident artists, it’s a unique opportunity to tell the stories hidden in big data.

“I think a lot about academic spaces, who gets to use those spaces and what they’re used for,” says Liss LaFleur, a media and performance artist who teaches New Media Art at the University of North Texas. “The library, as a space, is an interesting part of this project—that this is happening in a library and not in an museum or a gallery.”

LaFleur, who will visit in August and September, will use data about sexual harassment and assault gathered through the #MeToo hashtag to make a digital work of art that visually draws upon both her mother’s work in stained glass and Florence Nightingale’s coxcomb diagrams—themselves early innovations in data visualization from a pioneering feminist. She has represented stories around gender concepts in similar ways before, including humming Leslie Gore’s “You Don’t Own Me” through a 3D-printed replica of her own mouth and projecting it on the Manhattan Bridge. But in the project at the Libraries, it’s the hashtag that enables meaningful, large-scale storytelling.

“The #MeToo movement is so powerful because of the multitude of voices,” LaFleur says. “There’s no individual voice that overpowers another. The masses are the influential voice. I’m interested in looking at how those voices are being distributed internationally through social media and thinking about how I could use that data to inspire empowerment and create a space for reflection.”

During her residency, LaFleur plans to form a student cohort to help compile data. She hopes that work will lead to conversations about surveillance and tracking one’s online activity, as well as how the same data can tell different stories when processed with different applications. Because feminism and data visualization together is such a new field, she’s interested in nurturing this awareness within the NC State student body. The Libraries, to her mind, is the perfect site for this work.

“I got really excited learning about the multiple spaces available at Hunt that I could shoot visuals to,” she says. “This is a work of fine art, but it’s also in the library, and it’s going through these phases of collecting data and analyzing data and talking about feminism in relation to data and how these visuals illuminate all of that.”

Lucas Swick, a Portland-based generative artist who will visit in October and November, plans to draw upon different categories of local community data to produce his visuals. Over the course of his weeks at Hunt, he’ll develop and deploy several different interactive visualizations that library visitors can manipulate through a phone app.

“What really resonates for me about the Hunt Library is how they’ve transformed the library into a community space,” Swick says. “Libraries are one of the last great equalizers in our society where the amount of resources you have doesn’t really matter. You can still access a lot of great information.”

Swick has been working with data scientists at NC State to build a demographic data set around low-income families in the Raleigh area, not just to tell that story but to raise awareness around poverty issues. This echoes his own change in awareness in his community in Oregon.

“My wife started a nonprofit in Portland that provides art education and recreation to low-income communities,” he says. “As part of that, I interacted with a bunch of people I normally wouldn't have, and it opened my eyes to generational poverty.”

Rather than come to Raleigh with visualizations completely thought out, Swick will be prepared to go in several potential directions to make illustrative renderings with the data. He’s considering images of birds of paradise on which colorful plumage could represent how rich someone’s life can be despite lacking resources. He has another idea about an image of hands opening to reveal tiny representations of the material possessions of families in different income brackets.

For Swick, it’s the data that will drive the visualizations. He’s leaving room in his project to collaborate with data scientists and librarians on what imagery visitors will eventually see. For an artist whose work has been deployed in such bustling public places as Union Square in Manhattan and on three-story, LED “lightblades” in Portland, the intimacy of the library partnership—and its implications for community—makes this project particularly meaningful.

“We’re at a dangerous time when funding for libraries is going down,” he says, “so it’s great that the Hunt Library says ‘We're going to build the library of the future and here’s what it’s going to look like—community is a vital part of that.’ We need more spaces like this.”