This coming August, NC State will enroll approximately 4,000 students as freshmen. These students will be relieved to learn that Student Government will not require them to wear a “freshman cap,” a red cap with an identifying white “F”. The tradition of freshman caps began in 1916 and was solidified in 1922 when Student Council passed a bill requiring all first-year students to wear the caps on campus as a method of increasing school spirit and reducing hazing. Student Council issued various punishments to students who refused to wear their caps. Freshmen were also required to carry matches for upperclassmen and to memorize the alma mater and fight songs. In celebration of their transition into sophomores, the 1922 freshman class began a new tradition of burning the caps at the end of their spring semester. In 1929 the freshman caps cost 75 cent and could be purchased at the campus Student Supply Store.

As female student enrollment increased at State College in the late 1920s, student debate centered around whether “co-ed” students should be required to wear the freshmen caps. A fall 1929 Technician editorial declared, “State College is a boys’ school and the girls really have been given a privilege to be allowed to come here. In recognition of this privilege, it seems only fair that they should comply with the freshman rule. . .” Debate on the topic quickly dwindled that fall following a freshmen uprising. 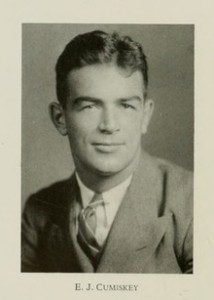 In November, first-year business student and football player Edgar “Mope” Cumiskey lost his cap. Student Council sentenced Cumiskey, who claimed he could not afford to replace his cap, to wear a dress for every day his head was bare. After Cumiskey wore the “comical” dress for thirteen days, approximately 400 “mad” freshmen gathered outside of the college cafeteria to burn their freshman caps. According to the Technician, students were “angered by the penalty imposed upon a football player by the Court of Customs.” Before students were able to burn their caps, Henry Love, the vice president of Student Council, brought the mob “to normal order” and encouraged freshmen to “get rid of the cap in a legal manner.” In November 1929, the freshman class voted 582 to 18 to seek a referendum to abolish the caps on campus. Freshman Class President Arthur Rogers proposed that Student Council poll students on whether to continue the cap tradition; on December 11, 1929, the student body voted 514 to 499 to continue the freshmen caps. Unsatisfied with the results of the election, Rogers approached the State College Board of Trustees and presented the “cap question” to them for consideration. In June 1930, the State College Board of Trustees voted to discontinue the freshmen caps, however freshmen were still required to carry matches for upperclassmen.

The House of Student Government revised the freshman rules in November 1930, easing some restrictions while strengthening others. For example, freshman were no longer required to dress neatly while in Raleigh, but freshmen were required to "have matches on their persons at all times for the benefit of upperclassmen” had to be available "to run errands at the request of any upperclassman, and give aid when asked.” Although the freshman caps were a dying tradition, Student Council still subjected freshmen to restrictive legislation.