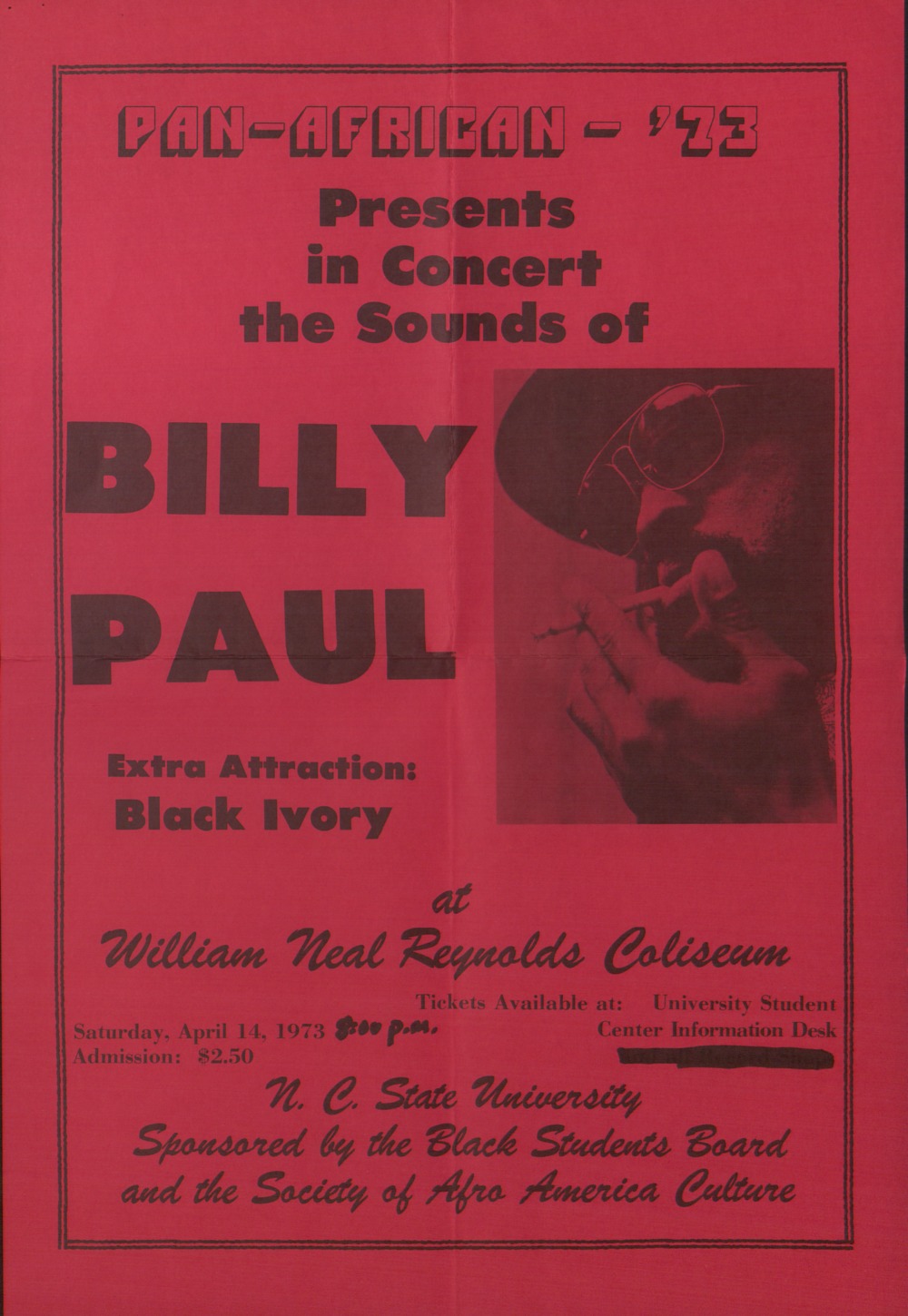 The first Pan-Afrikan Festival (originally spelled "Pan-African") on campus took place 50 years ago, March 21 - April 2, 1971.  The aim was to educate people on the concept of Pan-Afrikanism through the celebration of black culture with lectures, dance, theater, concerts, film, and food.  Funding for the festival was requested by the Society for Afro-American Culture in October of 1971, prompting "heated debate," according to the October 15 Technician.  Soon thereafter, the Black Students Board secured $1000 for the festival, which built upon cultural events that had taken place in the spring of 1970.

The 1971 festival featured lectures such as "Liberation Struggles in South Africa" (by Raymond Mbala), "Pan-Africanism" (by Owusu Sadaukai Mwalimu), and "Black Power and American Myth," given by civil rights leader Rev. C.T. Vivian.

One of the highlights of the first festival was a concert by renowned jazz musician Ramsey Lewis and saxophonist Eddie Harris, held in Reynolds Coliseum.  While a review in the March 31 Technician stated that the concert was "not a success" and that Lewis left "in a huff," a letter to the editor on April 9 clarifies that if there was any "huff," it was because Lewis wanted to play longer but had to leave to catch a plane.  The authors write, "The talent was superb, a fact that was obvious to all who attended, and the audience was most responsive."

Other events that rounded out the first festival included poetry readings, film viewings of "The Battle of Algiers" and "Black Roots," and gospel concerts.

Over the years the Pan-Afrikan Festival has expanded to include beauty pageants, games, and fashion shows.  Performers such as Bobby Womack, Billy Paul, and the Staple Singers have provided entertainment.  At the 1972 festival, Mavis Staples brought down the house with the hit song "I'll Take You There."  As reported in the April 14 Techncian, "the entire pack-filled building broke loose."

Pan-Afrikan Week was last held in 2019.  The event website described it as "a week long celebration held by our Black Students Board to highlight black culture and excellence with an array of events and partnerships with other organizations."  It included a dance class, African Night, Soul Food Sunday, and Paint the Culture in the Free Expression Tunnel, among other events.

Please note that according to Library policies, on-site Library access is limited to NC State students, faculty, staff, and university affiliates with a Wolfpack One Card, including Centennial Campus partners. For requests from these communities, we will respond to your inquiry as soon as possible and will email you when your requested materials are ready so that we can confirm your appointment time. For all other requests, we will respond to your request as soon as possible.