Printing the future of science 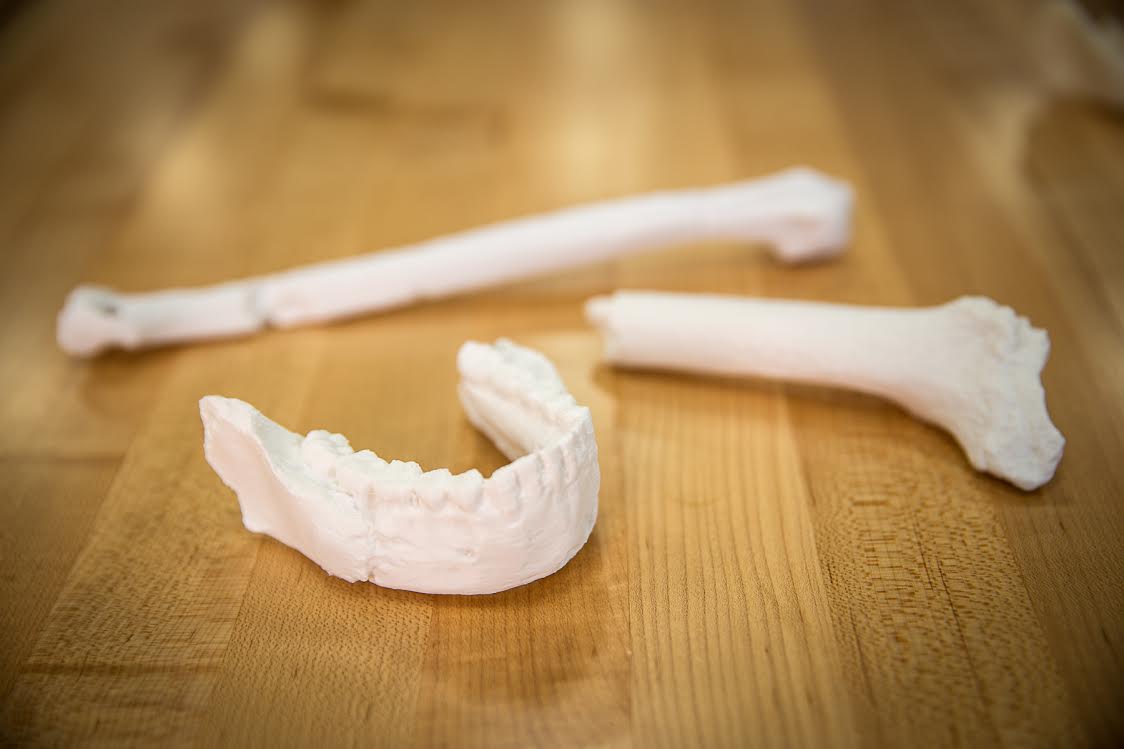 Six chemistry students sit in a circle in a classroom in Cox Hall, passing around a knobby, plastic mass about the size of a baseball. Spotted here and there with blue and red patches, it’s described in turn by the students as an ugly bracelet, a ceramic coffee mug made by a kindergartener and, finally, a very complex protein—which is what it’s actually a model of.

This next-generation representation of a molecule is just one of an increasing number of ways that students and faculty in the hard sciences at NC State are using the 3D-printing capabilities of the NCSU Libraries Makerspaces to improve learning experiences and create innovative instructional materials in fast, cost-effective ways.

“Every model’s got a purpose”

“I’m focused on developing materials that will improve students’ understanding of the most basic chemical properties and especially how molecules interact” says Amanda “Kat” Cooper, a Ph.D. candidate in chemistry at NC State and the architect of the 3D-printed protein. “There are prevalent misconceptions that students have in general chemistry, and unfortunately they stick around all the way through biochemistry.”

Cooper got a National Science Foundation grant to replace the old ball-and-stick models of chemical compounds with accurate representations of the molecular surface, 3D-printed in the Libraries’ Makerspaces. Emerging Technology Services Librarian Adam Rogers has helped Cooper with troubleshooting the printouts to suit her specific needs, as well as patching together a workflow out of several freeware programs and online resources. The tools don’t yet exist to do what Cooper needs to do, so she and Rogers have to create them.

If you looked through an electron microscope at this membrane protein, it really would look like a blobby ball of mini-marshmallows with a gaping hole through the middle. Some of the protein’s areas are electron-rich and carry a negative charge; other areas are electron-poor and are positive. Cooper has colored the areas red and blue, respectively. This information means everything in terms of what compounds can interact with the protein and how the interaction will work—information that the classic ball-and-stick models don’t contain. If you don’t know how molecules will interact, you can’t design a drug or a chemical blocker.

“Professors assume that students learn molecular interaction the first time around,” Cooper says. “But we’ve looked at students’ understanding of the concept across several institutions across the country, and we see the same incorrect ideas keep cropping up.”

Cooper uses visualization and guided group activities, along with the models, to catalyze classroom conversations about interaction. Prompted by questions on a handout, the group in Cox Hall pulled little 3D-printed glucose molecules, which look like popped popcorn, out of a bag. Students handed the protein around, touching the glucose to it and discussing its polarity.

Another took the model and scrutinized its inner surface. “I just want to touch this thing. It’s pretty cool,” he said. Then a little white shape skittered across the tile floor. “Oh no, I lost our glucose!” he laughed.

“Every model’s got a purpose, and every model’s got drawbacks,” Cooper says. “Everything’s so tiny in chemistry that you can’t just look at it, so we have to do models and representations. The balls and sticks are nice because you can take them apart and put them back together. But I’m working on what’s going on between molecules. I feel it’s more interesting for students to see that this is what the space of a molecule actually looks like.”

The 3D-printed molecules also offer a scale advantage. You’d need a gymnasium to hold a ball-and-stick model of some complex molecules. “When you get up to the protein level, balls and sticks just aren’t going to work.”

While Cooper is printing things found deep within our cell walls, Christopher Walker, an assistant professor of molecular biomedical sciences at the College of Veterinary Medicine, prints things found deep in a South African cave—bones, specifically.

Walker was part of a team that, in 2013, discovered a treasure trove of bones from the early hominid species Homo naledi. The find, which National Geographic calls “one of the greatest fossil discoveries of the past half century,” essentially pushed aside the archaeological foliage of the human family tree to reveal a whole new lower branch dating back between two and three million years.

“The naledi find has effectively doubled the fossil hominin sample size in South Africa,” Walker says. Then he pauses to let that statement sink in. If you were a paleoanthropologist, your jaw would have hit the floor.

In a dig site so inaccessible that the team had to recruit “skinny” spelunking scientists over the Internet, specimen after specimen was unearthed and brandished for a camera that supplied a live video feed of the dig to cheering paleoanthropologists on the surface. Skulls and ribs, jaws and teeth, complete hands and feet still arranged perfectly, even inner ear bones—totaling over 1,500 specimens in all from about 15 individuals.

Although the bones were well preserved and positioned, they raised plenty of new questions about human evolution. While some parts of a Homo naledi skeleton look primitive and ape like, others can almost be mistaken for a modern human’s bones. Lead paleoanthropologist Lee Berger wanted the whole scientific field to see these bones in order to provide insight. Instead of simply locking them in the Fossil Vault at the University of Witwatersrand in Johannesburg where he teaches, he wanted them to be as open source as possible. This isn’t the norm.

“There’s a history in the field of paleoanthropology of being hyper-secretive, hyper-protective of your fossils,” Walker says. “It’s a very clique-y field. Some fossils that had been announced in the early 1990s weren’t published until around 2009—going on 20 years. You don’t want to rush good science, but our take on the science as it applies to Homo naledi is that we’re going to bring in lots of people.”

Walker’s team takes detailed, 3D surface scans of the bones, which are made available on a site called MorphoSource where anyone can download and print them. Within the first year, over 100 of the most diagnostic fossils from the initial dig were out there for the scientific community to study.

“Even the best scientists—Einstein, Darwin—were wrong some of the time. Everyone makes mistakes, and that’s part of the beauty of science,” Walker says, noting that a bigger, more diverse set of eyes means mistakes are corrected faster. “It’s not about being right so much as moving in the right direction. Now everything’s out there, so the field can correct itself.”

Walker cares about sharing informational resources among the scientific community, but he’s genuinely passionate about the teaching advantages that 3D-printed fossils and bones afford him. In the Libraries Makerspaces, he’s printed out Homo naledi mandibles, proximal femura (the thigh bone near the hip joint), the tibia of a juvenile, and the humerus of an adult, as well as several skulls. One of Walker’s skull reconstructions is on public display at the Hunt Library.

“Everyone learns differently. But just having one more way of conveying to students what these fossils were, what they looked like, and where they came from undoubtedly helps,” Walker says. He’s used bone printouts from the Libraries Makerspaces in classrooms ranging from the College of Veterinary Medicine to the Montessori School of Raleigh elementary school.

“I laid out all the fossils on a table so the kids at the Montessori School of Raleigh could handle them,” Walker says. “A lot of the students were intrigued that the Homo naledi adults were about the same size as they were. They could actually hold up a juvenile’s tibia against their leg to compare.”

“That sort of hands-on learning, especially at their age, is a luxury. If they drop a bone and break it, I come back to the library makerspace and print another one for less than a dollar. It doesn’t matter. You can focus on the teaching and the learning and not worry about the objects.”

Walker marvels at the cost-effectiveness of 3D-printed fossils. Until the technology existed, he had to order a copy of a bone from the museum that held the original. “A year later something shows up from somewhere like the National Museum of Kenya, for example, and it costs you $1,000 for one fossil reproduction,” he says. “When you have that sort of investment in a fossil cast, it’s not the sort of thing that you want to bring to an undergraduate class to be handled, let alone a high school or middle school class.”

That’s why Walker is part of a team at the Vet Med Library that’s digitizing anatomical collections to both create new teaching resources and increase the availability of free anatomical models for learners worldwide. When learning animal anatomy, CVM students use something called a “bone box”—essentially a complete dog or cat skeleton, with bones labeled, in a large box. Students can check bone boxes out, and faculty carry them to and from classrooms. Understandably, bones get lost or broken, which presents a tricky problem.

“It’s a unique individual in each bone box,” Walker says. “We can’t just go pull another one of that bone. We might have a beagle bone over here, but that was a golden retriever bone that you just broke. Ultimately what happens is that the whole box gets pulled aside and we have to get a whole new skeleton. And it’s not easy to skeletonize a cadaver.”

With help from Library Fellow Lauren Di Monte and Vet Med Library Director Kris Alpi, as well as funding from the NCSU Libraries Alt-Textbook program, Walker is scanning and printing the animal skeletons for the bone boxes. “Now the students are learning from one individual,” he says. “And if we break something, we just print out a replacement tibia or humerus and put it back in the box.”

The bone box scans are also destined for MorphoSource, so that other faculty and students anywhere can print out animal skeletons. Copies of that CVM golden retriever bone box could show up in veterinary classrooms on the other side of the planet. Walker sees 3D scanning and printing as revolutionary in research and science education.

“It’s revolutionary certainly in paleoanthropology and I can guess for paleontology as a whole,” Walker says. “I’ve been working with dinosaur paleontologists from the North Carolina Museum of Natural Sciences in downtown Raleigh. They’ve been at Vet Med scanning some fossils of dinosaurs. It’s the way everyone is going.”

Walker envisions a day when inexpensive 3D printers are in every classroom and researcher’s office. But he’s careful to acknowledge the indispensability of experienced Makerspace staff. “There’s always a point where you need help, and that’s where a Makerspace comes in. It’s such a luxury to be able to just drop a file off and get a call a few days later, not having had to worry about it. They’ve probably had to do three different runs to get a good print, or to reconfigure my file for output. The Hunt and Hill Makerspaces offer affordability and assistance.”