We've reopened! Welcome back. What you need to know before you visit 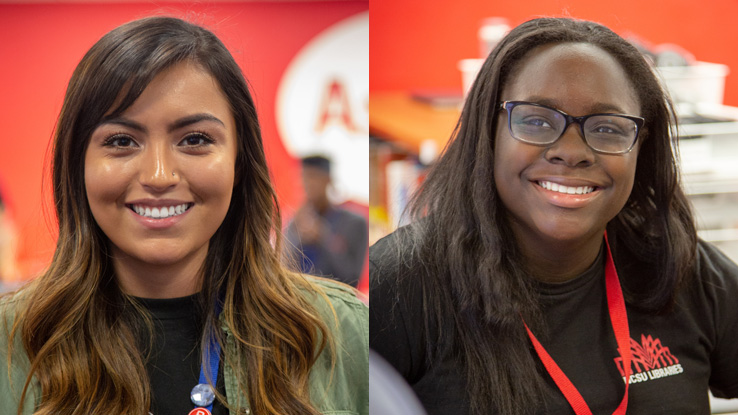 Julia Velasquez has been with the Libraries almost since she set foot on campus at NC State. Now a senior and on the verge of her degree in Materials Engineering, she started as a student worker at the Hill Library Ask Us desk the first semester of her freshman year. And after four years, she still loves it.

“I think it's probably the best job on campus,” Velasquez says. “Freshman year, I needed a job and there was an on-campus job fair. I didn’t really know what I’d be doing but I figured I was here every day anyway. Now I don't want to leave.”

Helping fellow students at Ask Us has given Velasquez confidence through a growing expertise in what students at NC State need from the Libraries—even if those students don’t themselves know what they need.

“Once you’ve worked here long enough, it's kind of the same stuff over and over, so I have a lot of broad knowledge,” she says. “Last year I became a Student Lead, so there's more responsibility. I feel like I'm able to give people advice. For people who have just started or don't really know how to do something or seem unsure, I jump in a lot.”

That confidence has helped Velasquez begin fulfilling her dream of stepping from the red bricks of NC State to the red soil of Mars. She wants to do metallurgical work on spacecraft, and specifically to work on a project that lands a craft on the red planet. After she graduates this spring, she has a job waiting at Arconic, one of the biggest aerospace manufacturers in the world, where she interned last summer.

“I'll be making blades and vanes for engines, for anything in the air, working with metal to make sure it doesn't have any defects in it and to make it have certain properties,” she says. “Arconic mostly works with airplane engines, but they also work with NASA and SpaceX. Hopefully I’ll get into their division specifically focused on space stuff. And that'll be my lead into working with NASA or SpaceX or Boeing. And the end-goal of the dream is to work on the Mars Mission.”

She credits the years at Ask Us with helping her build the communication skills to work in complex production environments and on large projects like the Mars Mission.

“The biggest thing I’ve learned from working at the library is just interacting with people. It's problem-solving in a different way,” she says. “At Arconic, I worked with the engineers, which was a small group. And then you have hundreds of workers out on the floor, and they're who actually make your products. So you have to be able to communicate with them because you give them specifications and they follow them. If you're not talking back and forth daily, then it's a mess.”

Fellow winner Chantal Warfield is also all about communication—communicating a love of reading to young people. Warfield has wanted to be a librarian since she was in middle school, inspired by the teen and children’s services librarian at the Grissom Public Library in Newport News where she spent part of her childhood.

“The main reason I want to be a librarian is just because I like to read,” Warfield says. “I’ve always heard that you should do something you love to do—and I love reading, so why not? One librarian who really influenced me was Mrs. Fox. She was the children and teen services librarian at my public library and she ran the different programs. She got me into volunteering at the library, doing the summer reading program and the teen advisory committee.”

Naturally gravitating to the library at NC State because of that love of reading—Warfield read a book a day for a year during high school—she staffs the Ask Us desk, where she can exercise her passion for service on a daily basis.

“I love this job, I really do,” she says “Starting at Ask Us, I didn't think it was going to be so customer-service based. I mean, I knew libraries weren’t just about reading books, but the fact that we're dealing with so many students a day is really cool. I’m helping them, but I feel like they’re helping me as well—with directional issues or finding books or honing in on different skills. I really love it.”

Her customer-service skills have been recognized at her job at Clarks, a shoe store in Crabtree Valley Mall, as well as in the Libraries scholarship. Clarks, which has over 1,000 stores around the world, named Warfield one of its three Force of Nature Award winners company-wide.

“Clarks was running a contest for all the stores within North America, Europe, and China where they asked store managers to send in a person who they felt was a force of nature because they had a collaboration with the new Star Wars movie that came out at that time,” she says. “They wanted somebody who really embodied that character in some way. And they nominated me—it was about how much I do at the job and how involved I am at NC State.”

Customer service is a field of its own, but for Warfield it’s a means toward librarianship and specifically toward fostering a love of reading in young people.

“I always knew I wanted to be a children’s and teen services librarian in a public library,” she says. “I have a minor in Africana Studies, so I’m definitely going to be using that in trying to help African American students and children of color to find books that represent them. And because of what I'm learning at the Libraries, I know that I can put that back into being a librarian too.”

The goal of the Library Leaders Scholarship Endowment is to encourage students to consider pursuing an advanced degree in Library Science. In addition to the monetary award, the winners will enjoy a congratulatory lunch with Greg Raschke, Senior Vice Provost and Director of Libraries, and David Goldsmith, Associate Director for Materials Management.