A media-rich, web-only monograph examines the "fantasies of technological utopianism as well as anxieties about the destruction of the environment and the dehumanizing impact of modernity." 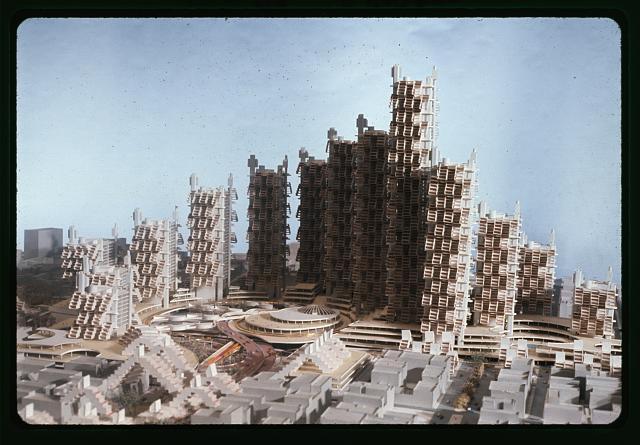 Futurama, Autogeddon was originally published by the University of Pennsylvania Press in 2015, as an Apple iBook titled Highways of the Mind. Dr. Helen Burgess approached the Libraries to ask whether there might be a second life for the book when the copyright to the book reverted back to her and her co-author. This resulted in a book created on the PubPub platform: Futurama, Autogeddon.

Emily Cox, the Collections & Research Librarian for Humanities, Social Sciences, & Digital Media, connected Dr. Burgess with the Open Knowledge Center, where open publishing is a key area of expertise and interest. Through a series of Zoom calls, the project team landed on the concept of recreating the book in an open access, web-only form utilizing the PubPub platform.

Since the text relies heavily on multimedia, the first task was a full copyright permissions review. Luckily, much of the media was already openly licensed and available for reuse on the Internet Archive, and the archives and holders of other media were willing to extend permissions from the original book to this second edition of sorts.

The production of the PubPub book was managed through a booksprint in the summer of 2021. Coordinated and led by the Open Knowledge Center, including Digital Project Coordinator Kelsey Dufresne and graduate student assistant Carrie Hill, the project team partnered with the co-authors to reincarnate the content in less than one week. PubPub also afforded the ability to add commentary in the margins, which the co-authors utilized in a creative manner.

The final phase of the project was to meet the goal of increasing discovery for the book. Micah Vandegrift connected with the University of North Carolina Press' Office of Scholarly Publishing Services, which registered a new ISBN and a DOI for the book now formally titled Futurama, Autogeddon. A soft digital preservation strategy is accomplished through capturing the web version of the book using Conifer, and the book will be exported from PubPub as an EPUB and PDF and deposited for safekeeping in Humanities Commons CORE repository.