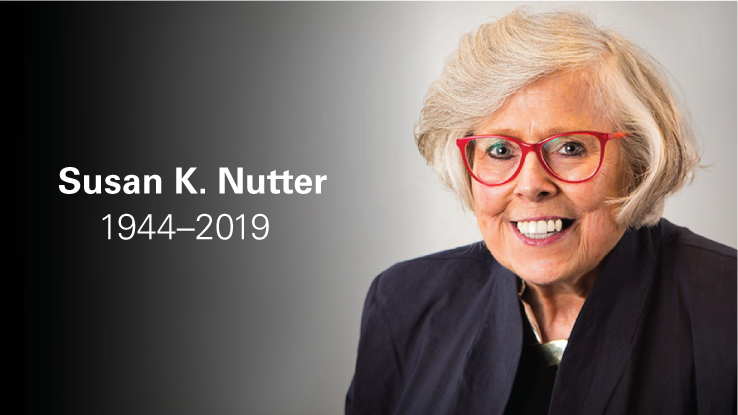 Former Vice Provost and Director of the NC State University Libraries Susan K. Nutter, who retired in 2017 after a 30-year career as one of NC State’s and the library world’s most dynamic and influential leaders, passed away on March 25.

Susan's obituary can be found here. She was predeceased in December by her beloved husband, best friend, and creative colleague, Joe Anderson Hewitt, former Vice Provost and University Librarian at the University of North Carolina at Chapel Hill.

A memorial will be held on May 31 at 10:30 a.m. at the James B. Hunt Jr. Library, NC State University, Raleigh, NC. More details will be available soon about the memorial and subsequent reception, including parking information for guests. Contributions may be made to the University Libraries' Susan K. Nutter Innovative Leadership Endowment.

The Hill Library Color Wall and Conservatory have been lighted purple in Susan's honor until after the memorial service.

A memorial website honoring Susan and her visionary career is available here. We invite you to celebrate her life by sharing your thoughts, memories, and photographs of Susan on this site.

A Legacy of Leadership

Susan placed the Libraries at the center of NC State’s overall success. She set forth an ambitious vision and worked tirelessly to achieve it, transforming every aspect of the library along the way. Her many significant achievements ranged from building world-class research collections and spearheading the creation of the online library, to attracting and developing a uniquely talented and capable staff, to overseeing the design and realization of many beautiful and inspiring spaces for learning, collaboration, and discovery. 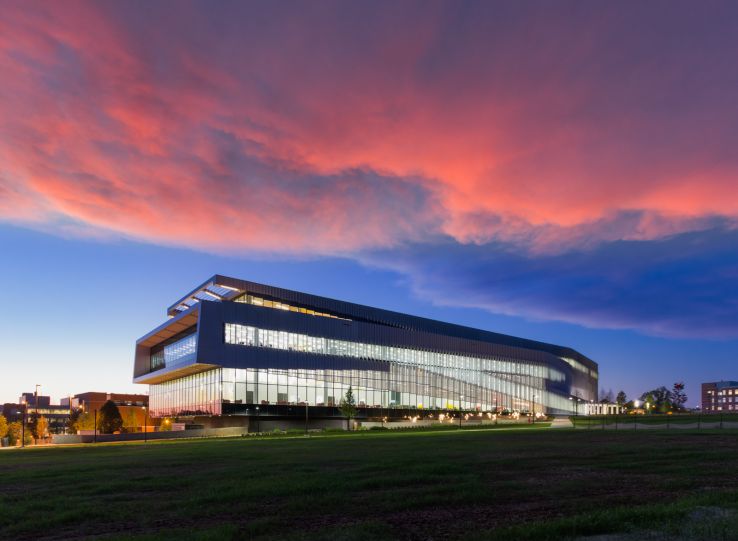 Opened in 2013, the award-winning James B. Hunt Jr. Library—Susan’s signature accomplishment—has become one of the region’s most iconic buildings. Based on bold design and infused with engaging technology, it enables and reflects NC State’s spirit of innovation and entrepreneurship and bolsters our reputation as a preeminent research university. Susan also ensured that the university’s first main library, the D. H. Hill Jr. Library, kept pace with Hunt through creative redesign and renovation of flexible, technology-rich learning spaces. These changes reinvigorated the very idea of a library’s centrality to its campus community.

While Susan's legacy is her embrace of emerging technologies and innovative scholarship as embodied in the Hunt Library, it was her ability to connect with students, faculty, staff, alumni, and colleagues that made her such a special leader. She dedicated herself fully to helping all library users succeed, and she lived and breathed that dedication every day, reaching out to them to learn about their needs and challenges and building an organization with the talent and agility to develop creative and responsive solutions.

Susan's many honors and awards include the Association of College and Research Libraries (ACRL) Hugh C. Atkinson Memorial Award (1999), the 2005 Library Journal “Librarian of the Year”, and the 2016 ACRL Academic/Research Librarian of the Year. Under her leadership, the Libraries was the first university library to win the ACRL "Excellence in Academic Libraries Award” in 2000. In 2016, Nutter accepted the IMLS National Medal for Museum and Library Service on the Libraries’ behalf from First Lady Michelle Obama in a White House ceremony.

Transforming the Libraries at NC State 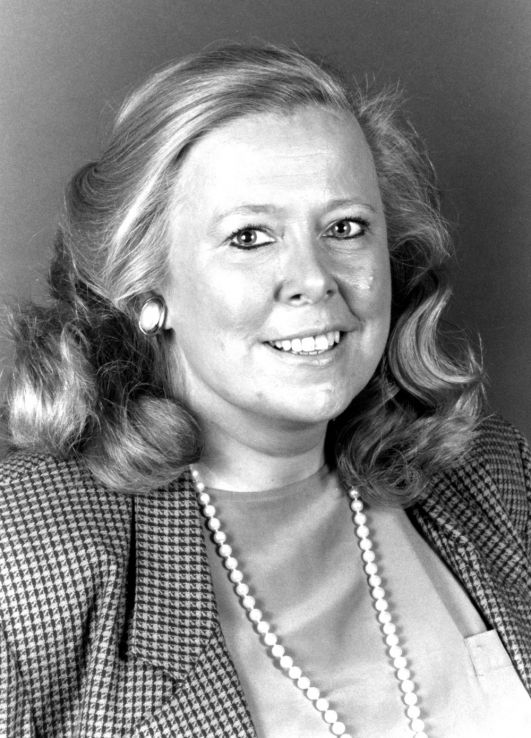 When Susan took the reins in 1987, the Libraries ranked near the bottom among North American research libraries. Under Susan’s leadership, it stands near the top. But perhaps more importantly, the Libraries became a major competitive advantage for NC State’s faculty and students and a vital contributor to the university’s mission.

Susan knew that the first step was raising the profile of the Libraries on the NC State campus. “We had to become central to the academic process here at NC State,” she recalled in an interview shortly before her retirement in 2017. “We had to be a part of all the important decisions that were made at the university.” Susan listened closely to the needs of faculty and students and implemented their ideas in a timely manner. “Students cared about the number of hours the library was open, electronic access, collections,” she said. “They wanted staff who had the skills to bring the technology along. So those are the things we did.”

From the bustling Learning Commons at Hill to the immersive visualization spaces at Hunt, she gave NC State a world-class research platform with the power to transform teaching, learning, and research for the 21st century. She also built a highly motivated, expert staff that continually develops and delivers innovative services and is embedded in every aspect of the academic endeavor. Thanks to her leadership, the Libraries truly embodies NC State’s “Think and Do” culture.

From the beginning, Susan’s forward-thinking vision shaped the Libraries into one that anticipated what users would need in the future. Having glimpsed the powerful future of networking and online resources through her early work at MIT, Susan immediately set out to build an online library at NC State. “There was a lot of opposition at first,” Susan recalled. “One Monday, every networked printer on campus had a fax about Susan Nutter wasting state funds buying all this technology and unproven stuff.” By 1990, however, the online collection was working—and growing fast. Today, its usage far exceeds that of the print collection.

As the rest of higher education followed in going digital, Susan built upon that foundation. She made the Libraries one of the first research libraries with a Learning Technologies Service to help faculty develop online courses, a Scholarly Communication Center to advise on intellectual property in the digital age, and a Digital Library Initiatives department developing innovative projects to enhance access, collections, teaching, and research.

As library access and the research collections improved, Susan saw that she needed to build a staff that was agile enough to not only react to but anticipate library users’ ever-evolving needs. By automating some basic library services and processes, Susan gave staff more time to serve the campus community and grow as professionals. She set high standards and instilled throughout the organization a sense of confidence that each individual’s contributions were special and had the power to move us closer to our goals. By creating this culture of innovation and providing excellent support for staff, Susan recruited some of the profession’s top talent.

One of the most tangible examples of this is the NC State University Libraries Fellows Program. Considered one of the premier opportunities for new talent in academic libraries today, the program offers new librarians a two-year appointment during which they develop expertise in a functional area and contribute to an innovative initiative of strategic importance. To date, 76 Fellows have completed the program, 52 of whom moved into permanent librarian positions here at the completion of their fellowship. Six former Fellows have been named Library Journal “Movers and Shakers.”

The library of the future—and a crowning achievement

A true visionary, Susan recognized, while on her first visit to NC State in 1987, the importance of planning for a library on Centennial Campus. During her interview here, when asked about her plans for the future of the Libraries, she outlined a vision for building such a library--a creative “nexus” for the emerging Centennial Campus community of students, faculty, researchers, and corporate and government partners--that would eventually become a reality. In 2013, her dream was realized in a way that was more extraordinary than anyone could have imagined.

Now universally acknowledged as “the library of the future,” the James B. Hunt Jr. Library is a signature building for the university. Its bold design is a visual statement of its bold purpose--to be a place not of the past but of the future, a place that welcomes all members of the NC State community to learn, experiment, collaborate, and create. Susan’s vision and this beacon of a library that embodies it have crystallized and enlivened an international dialogue about the place of academic libraries in the 21st century.

The Hunt Library has been recognized nationally with some of the most prestigious awards for libraries and architecture. Notable recognition includes the 2014 American Institute of Architects (AIA) Educational Facility Design award, the 2013 AIA/ALA Library Buildings Award, and the 2014 Stanford Prize for Innovation in Research Libraries.

Susan Nutter’s leadership centered on a career-long insistence that an exemplary library is shaped by the specific educational and research needs of the institution that it serves, making the library a strong competitive advantage for the university. Her 30 years at the helm of the Libraries forged a legacy of user-focused leadership and powerful advocacy for the university’s strategic goals. She made it a priority to create strong and productive partnerships with faculty and other university leaders. Believing that every student is an alum of the Libraries, she made it her mission to develop personal relationships with NC State students and listen carefully to their needs and ideas. NC State students showed their appreciation of Susan in many ways, including honoring her with the first Jenny Chang Outstanding Student Service Award in 2008. Under Susan’s leadership, the Libraries grew, transformed, and shined. Her innovative spirit and remarkable achievements paved the way for a bright future for the Libraries and for NC State.