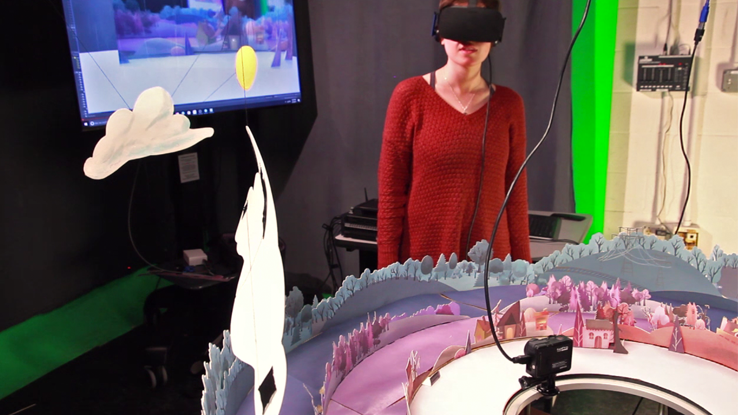 The NCSU Libraries is proud to announce the winners of its annual Code+Art Student Visualization Contest, which encourages students to create “massively responsive,” web-based works that give visitors a taste of the possibilities that await them in our libraries’ visualization spaces. The winning works will be displayed on the Hunt Library video walls.

Integrated Learning Librarian Alison Blaine has seen the Code+Art contest grow quickly. "The number of interactive projects submitted has increased since we started the contest a couple of years ago," she says. "Our student contestants really want to get library patrons involved in interacting with the walls as co-creators of the art, not just as viewers. Projects like these require a lot of skill to develop, and it's exciting to see the students taking on that challenge." 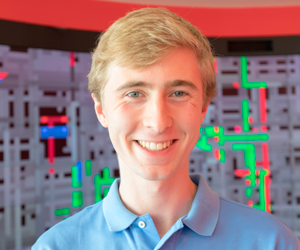 Freshman Nathaniel Brooks (Engineering) is this year’s First Place winner for his algorithmic  "Burst of Color." Brooks makes dynamic geometric works that permute patterns in an almost organic way. “Burst of Color” is designed to prompt a group-play mentality. Anyone with a touchscreen device can play—up to 1,000 users at once—whether they’re standing in front of the video wall in the Hunt Library or walking down a street in Singapore.

“I wanted to make something big that you could see on the wall from a distance, something that catches your eye. And I tried to make it noisy to hide the tiles in the wall,” Brooks says. “But also I wanted it to pop a little bit. When the piece starts out, it’s monochrome, but when people start using it, it gains colors from the users. That promotes people to see it and go ‘Hey, what is that? I want to try it out.’ And the more people who come up, the more colors come onscreen.” 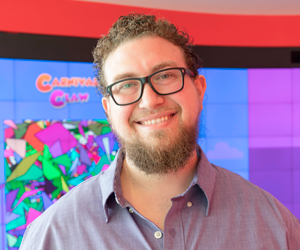 Tyler Mayberry (senior, Art Studies) received Second Prize for his augmented reality game app "Carnival Claw," which takes its look and feel from Mayberry’s favorite childhood video game “Zelda.” Players send a claw out to collect rupees and rupee bags, avoiding falling bombs all the while. To initiate a game, a player must take a picture of a colorful orientation image on the Hunt Library video wall or the game’s website.

“It’s meant to be a kind of ‘stop and smell the flowers’ kind of game," Mayberry says. “There’s no artificial intelligence or heavy physics engine or anything like that. It’s just something that I hope people can spend a minute or two playing to kind of take the edge off of being here studying at the library.” 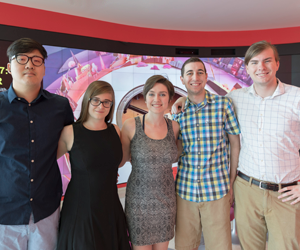 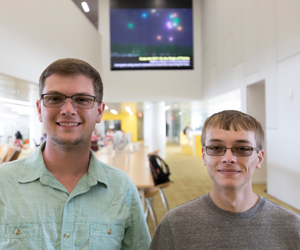 An honorable mention has also been awarded to Matthew Meeks (junior, Computer Science) and Nicholas Beam (junior, Mechanical Engineering) for their Darwinesque program "On The Origin of Fishies." The program uses neural networks to control fish on a search for food pellets. Assigning points to fishes for eating, the program visualizes principles of natural selection within a simulated environment.