Academic Libraries provide invaluable public computing services to their communities, yet computer use often goes untracked. Analysis of computer usage data can reveal patterns that help the Libraries better understand their users, gauge the success of new initiatives, identify areas in which user needs are not being met, and provide concrete data for annual reporting or funding requests. In order to better serve the campus community, an in-depth analysis of Library computer usage patterns was conducted at NCSU's D. H. Hill Jr. Library. The study examined usage data from the Fall 2009 semester from three vantage points: computer logins, duration of computer sessions, and utilization (the percentage of computers in use at a given time within the Library). Data was examined by semester week, by hour of the day, and by region within the Library. 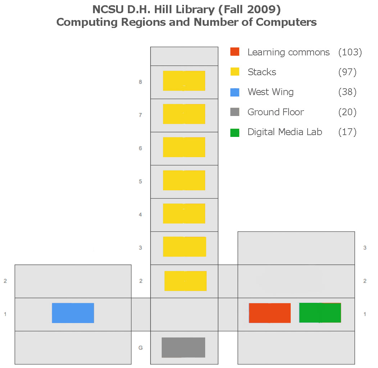 Duration
This term refers to the length of time of each computing session. Duration is derived from the transaction log by calculating the difference between the login time and logout time for a specific IP address. Sessions were discounted from analysis that had durations of less than one minute or more than six hours. It was assumed that these sessions represented logins performed automatically by the computers or users who forgot to log out of computers at the end of their session.
Region
This term refers to the physical space within the Library in which a group of computers is located. For the purposes of this report, the Library was consisted of five regions: the West Wing, the Ground Floor, the Digital Media Lab, the Learning Commons, and the Stacks. See Figure 1 for a graphic of the Library regions and the number of computers in each region.
Transaction
This term is used to refer to computer logins. Each time someone logs into a computer, a transaction is recorded in the log file.
Usage
This term refers holistically to user interaction with computers. The term is not meant to be associated exclusively with any of the three vantage points from which usage is analyzed is this report (utilization, transactions, and duration), but rather to the synthesis of these three vantage points.
Utilization
This term refers to the percentage of computers in use at a given point in time in a particular region.

Data is tracked through custom logging. Logs track a timestamp (from which the date, time, and day can be gathered), and the region in which computers are located. The transaction log includes an IP address and a transaction type (such as a login or logout) for every transaction. The utilization log takes a census of computers in each region of the Library every 15 minutes, and records the number of idle computers and computers in use in a specific Library region. PHP was used to process the log data.

Utilization percentages for a given hour of the day will be interpreted to mean that one or more of the three sampling periods during that hour returned true for the specified percentage of computers in use. The utilization sampling accounts for computers that are currently out of service.

Duration percentages for a given hour of the day will refer to the percentage of sessions that began in that hour and lasted the specified amount of time.

One factor that cannot be accounted for is students who forget to log out of computers. While the next user will remedy this problem fairly quickly during high-use periods, during low-use periods there is no way of knowing how many lengthy computer sessions are caused by computers at which students forgot to log out. This may have the effect of slightly inflating utilization percentages and session durations.