A literal blast from the past 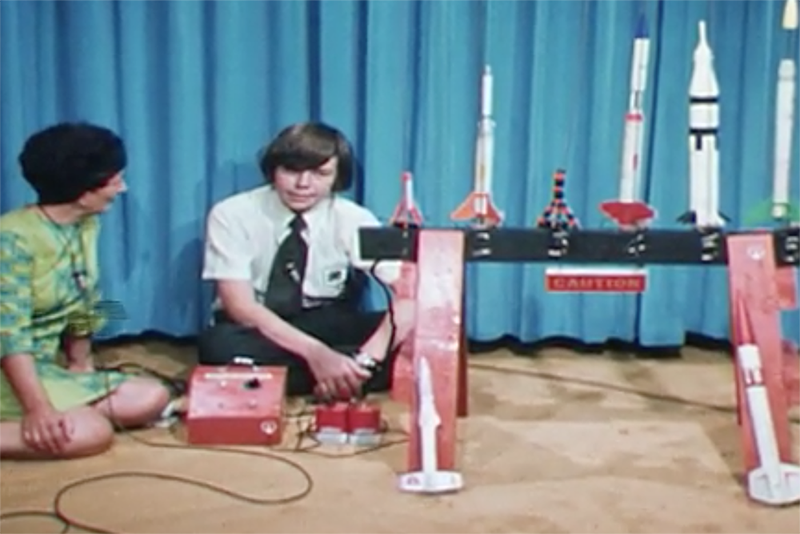 Randy Killebrew and his rockets.

“Wait… look at that picture. I know that kid.”

Randy Killebrew opened the email and paused. The e-newsletter from the Friends of the Libraries (FOL) announced upcoming events including an “A/V Geeks at the Hunt Library” screening of instructional films on makers. And the image next to the program description was an image of him.

It’s 1974. A 14-year-old Randy, in a short-sleeved, white dress shirt and wide tie, crouches in a television studio in front of a sawhorse stand bristling with model rockets. A woman in a green print dress kneels next to him, asking about his setup. It’s a still from a television program that the North Carolina Agricultural Extension Program made to feature 4-H kids and their projects, filmed on NC State’s campus during the state 4-H Congress that July. The film is preserved in the Libraries’ Special Collections Research Center (SCRC) and is accessible online as part of the SCRC’s Rare & Unique Digital Collections.

In the film, the rising ninth grader from Edgecombe County demonstrates his control box in the five-minute segment, entitled “Rocket Maker.” He sets off the igniters under his six rockets, which briefly flare into flame one by one. Since they were in a studio instead of a field, Killebrew didn’t put engines in the rockets, he explains to the host.

“Will this be your life’s work?” she asks.

“No, I’d like to go into electrical engineering,” Killebrew says, explaining that he has been rewiring the outbuildings around his family home in Edgecombe County.

“Well, maybe you’ll get to go to school at State someday.”

And young Killebrew did grow up to attend and graduate from NC State, changing majors from Electrical Engineering to Engineering Operations (‘82). He went on to work in textile manufacturing in roles as a supervisor, process engineer, systems analyst, and later as a plant manager. Then, after much of the textile industry transitioned overseas, Killebrew moved on to pharmaceutical manufacturing with Pfizer, retiring as a strategic inventory manager. He attributes much of his career, which has largely involved computer systems and data analysis, to his early interest in model rockets, electricity, and electronics.

“I’ve always been in the Friends of the Libraries, and I get the newsletters and all,” Killebrew says. “The email came in, and I was looking through it at all the good programs—I've always liked the programs that took place on campus, all the hands-on stuff. And I saw the A/V Geeks and scrolled down and saw the picture.”

“It just kind of threw me back in time for a minute. And I thought, certainly, I've got to make sure I tune in and see that.”

Killebrew sent a screenshot to his son Brad in Apex and his daughter Meg in Kentucky—both of them NC State grads themselves—and they immediately recognized him in the picture. They thought it was a great thing that the Libraries was showing a film of their father.

Killebrew’s wife Shelley took a little longer. Killebrew showed her the FOL email and asked if the program looked interesting to her. “Well, I guess if you want to see it,” she said. He asked if anything caught her eye about the program.

“Well, yeah… and there’s nothing else?”

After watching the “A/V Geeks at the Hunt Library” episode online, Killebrew corresponded with the A/V Geek himself—Skip Elsheimer. A frequent collaborator with the Libraries, and an NC State alum as well, Elsheimer presents thematic selections of unusual and exemplary classroom instructional films, newsreels, and documentaries and discusses them with faculty members or Libraries staff. He draws upon his legendary private collection and upon the SCRC’s trove of digitized collections as well. Librarians work with Elsheimer to curate the films shown at the events and to help connect the films to the rich storytelling that makes the events so engaging.

Killebrew’s episode, originally airing on February 25 and entitled “Let's Talk About Making Things,” can be viewed on the A/V Geeks YouTube channel. His “Rocket Maker” segment starts just after the 19-minute mark. In the real-time chat transcript that runs with the episode, other attendees reminisce about shooting rockets when they were kids, too.

“Strangely enough, I do remember it well,” Killebrew says of his 4-H segment. “It came back to me a few years ago, one of those things you think of and kind of wonder whatever happened to that? I figured there probably was no film, you know. I thought, nobody's ever saved that. So that's what really shocked me, is that years ago I was remembering it happening and then suddenly finding out that somebody had held onto the film and that it was actually available out there.”

“It's rare but it does happen,” Elshiemer says of vintage film subjects popping up years later in his inbox. “Both with people who appeared in one of my films and those who worked on the films. There are some good stories. What I learned is that some educational films were shot in a school and featured an entire class. And the finished film was never shown to the class. So I have people reach out to get a copy of the film where they never saw themselves.”

After showing “Rocket Maker,” Elshiemer and University Library Specialist Justin Haynes discussed how young Killebrew’s tinkering with rocketry exemplifies the lifelong interest in making that drives students to the Libraries’ Makerspace. “It shows that deep-dive mentality that makers have,” Haynes says. “Once someone gets into a hobby—especially model making, recreations, stuff like that—it’s a rabbit hole that people go down.”

As Killebrew grew up, his interests moved away from rocketry, but he kept all of his equipment. When his kids got old enough, he got it all out of storage and they shot rockets together. “I guess they really didn't get bitten by the bug,” he says, “But I think I would like to get back with it again with the grandkids when they visit this summer. This brought back some memories. I have an old launchpad and I’ll build a rocket with my five-year-old grandson and eight-year-old granddaughter and just kind of see what they think about it.”

The whole experience is a case study in the necessity of preservation efforts, the emotional power of archives, and the significant engagement that the SCRC’s public programs and digitization efforts offer the community. For Killebrew, the experience has been a nostalgic reminder that childhood passions never completely fade—and that they shape one’s life in unpredictable ways.

“When I mentioned the show to my son, he said, ‘Dad, are you embarrassed with the fact that you were associated with the geeks?’” Killebrew says. “I've always been a geek, I said. When you look back at it, you think: I probably wasn't as cool as I thought I was at that age, but I was happy with myself and that's what really matters.” 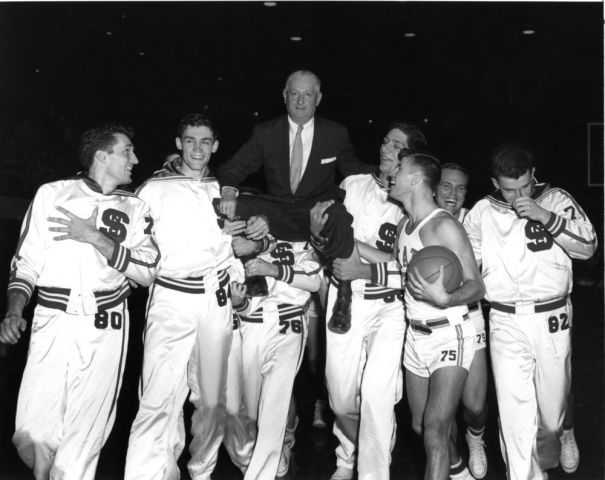 The Libraries, now playing on ESPN