The coyote who said “cheese” and the Wolfpack Citizen Science Challenge 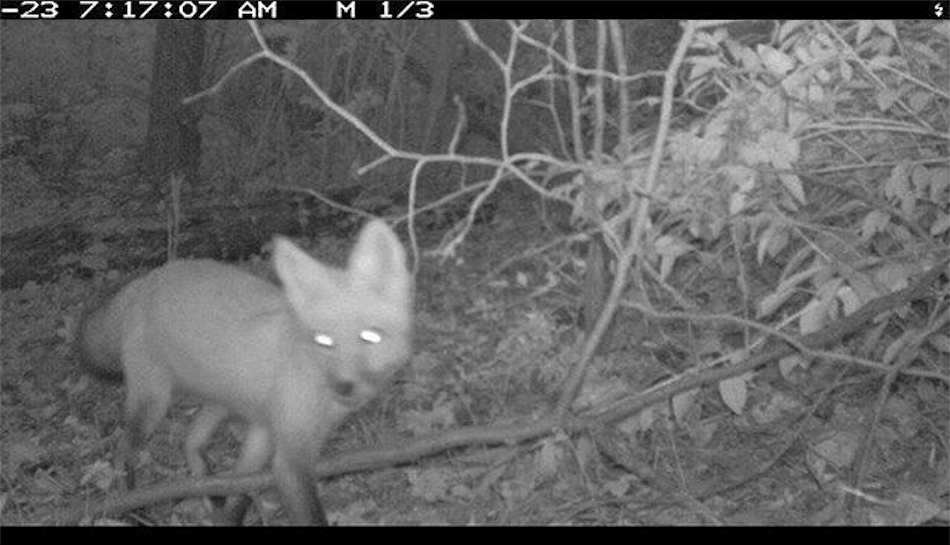 What wild animals—other than students—live on the NC State campus? Librarians worked with NC State’s Leadership in Public Science cluster to create the Wolfpack Citizen Science Challenge, turning students and community members into scientists to learn about the other mammals living among us. These citizen scientists placed motion-sensitive, infrared camera traps around campus to “catch” animals passing by. Their research, in the form of photographs, has led to a greater understanding of campus biodiversity, as well as insights into how animals use the forest patches found in urban and wild environments.

You are an animal, and you share your habitat with other animals. And no, that’s not referring to your roommate or your children. You share habitat with raccoons and deer, cats and foxes, coyotes and possums. You might not find yourself face to face with them very often, but you all live together.

NC State has an urban campus, but patches of forest are tucked among all the brick, asphalt, and concrete. These patches provide important habitat and refuge for city-dwelling species. Surprisingly—despite the hundreds of people who pass by these wild places each day—little has been recorded about what mammal species live here and how they use that habitat.

The Wolfpack Citizen Science Challenge" (WCSC) turned the whole campus into a research project in order to learn more. Launched in fall 2016 by the NCSU Libraries and the Leadership in Public Science cluster, the WCSC supports the cluster’s goal of cultivating campus awareness of, engagement with, and enthusiasm for citizen science. 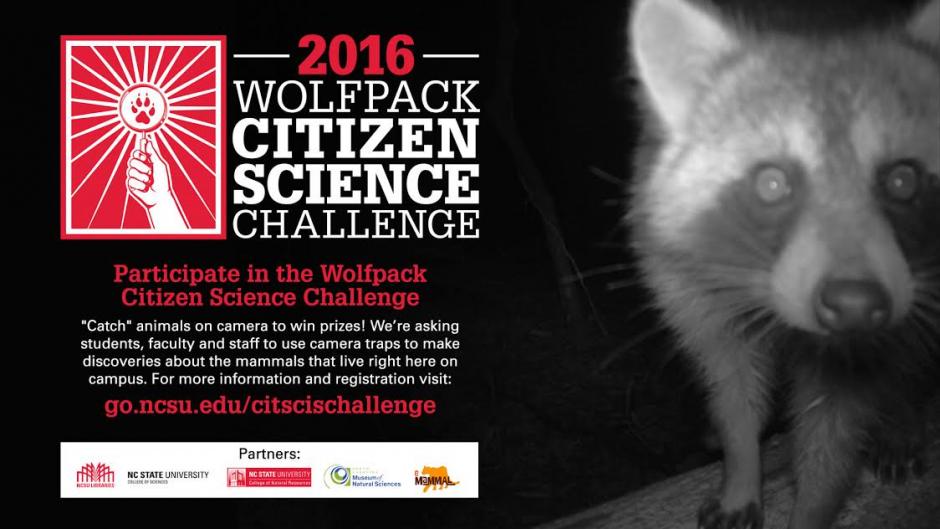 Community members found the Challenge to be fun and scientifically worthwhile.

For the overall challenge project, the NCSU Libraries partnered with the Chancellor’s Faculty Excellence Program Leadership in Public Science cluster, the College of Sciences, the College of Natural Resources, and the North Carolina Museum of Natural Sciences. Librarians and staff provided subject area expertise, as well as expertise in program planning, marketing, generating sponsorships, technology lending, and other strengths of the Libraries.

What’s citizen science? It’s a way for non-scientists—students, staff, and community members—to partner with scientists to do real research. When a research project needs a lot of hands to gather certain data or information, regular people can provide those hands. When the public is directly involved with a research project, it tends to make research findings more meaningful to the public.

In the inaugural WCSC, citizen scientists placed camera traps around campus to study and survey wildlife. Fastened securely to tree trunks, these camera traps silently took photos of animals as they ventured out. Using a motion sensor and an infrared flash, the cameras caught images of ground mammals making their rounds, day and night. 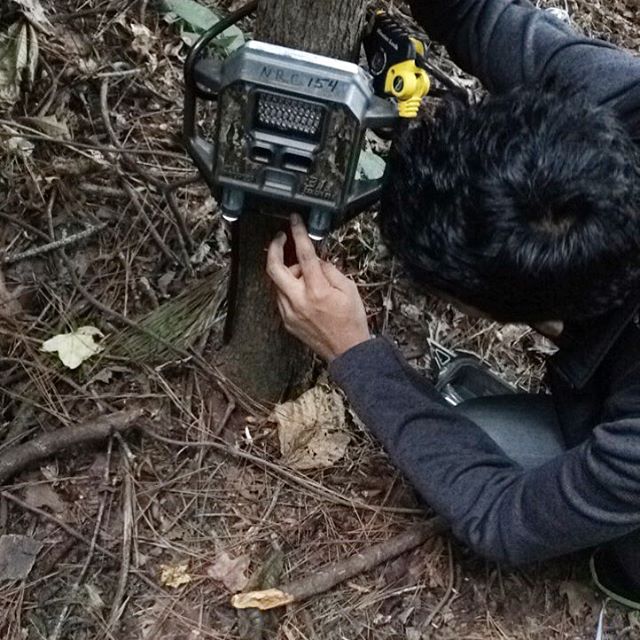 The Libraries lent camera traps for citizen scientists to install around campus.

For the 2016 Fall Challenge, the Libraries partnered with Roland Kays, a wildlife biologist at NC State and the NC Museum of Natural Sciences. Throughout the fall semester, three of Kays’ courses incorporated the challenge into their curricula, and volunteer teams took camera trap photos too. Kays and Eban Crawford (aka Senator Jaiz) kicked off the Fall Challenge with the multimedia lecture “Eastern Coyotes: Part Wolf, Part Dog, Extremely Adaptable” in the Hunt Library. After several months, Kays, his students, and other citizen scientists shared their photos and the analyses of the results at a closing event.

“NCSU librarians support the work of the Leadership in Public Science cluster. One of the cluster’s goals is to increase awareness of and involvement in citizen science as a method of engaging and involving the public in doing research that’s relevant to them,” says Karen Ciccone, Natural Resources Library Director and Research Librarian for Science Informatics.

“The Libraries came up with the idea for a citizen science challenge on campus, with prizes. And that evolved into our idea of working with an NC State researcher—Roland Kays—who had an actual need for volunteers to help answer a research question about the local environment.”

“Citizen science is great for two reasons,” Kays says. “One is that it collects interesting, useful, and important data, often at a large scale—and sometimes it gives us better data than we’d get otherwise. But then from the volunteer’s perspective, it also engages people in an activity that’s often different than what they’ve done before. It’s something that’s scientific, that’s contributing to a larger effort, and that’s fun in how it connects them with animals that they otherwise would probably never see.”

In addition to helping understand the biodiversity on campus, NC State campus results were compared with data collected by other citizen scientists in less developed areas around the state, contributing to an ongoing study of how animals use the forest patches found in different types of environments, from urban to wild.

For the closing event, students from Kays’ Mammalogy class and George Hess’ Natural Resources Measurements class presented the data from the challenge, as well as from additional, off-campus camera trapping in cemeteries and other environments. The students analyzed all that data and made comparisons between campus and cemeteries and parks in the Triangle.

To Kays’ mind, the results held a couple of surprises. “One was the number of coyotes we got, given that almost no one sees coyotes. I think we had coyotes at four different locations on campus,” he says. “The other surprise was how few domestic cats we got, because I know there are places where people feed cats on campus. It turns out that cats actually stick pretty close to the buildings and the bowls of food, and they’re not really wandering.” 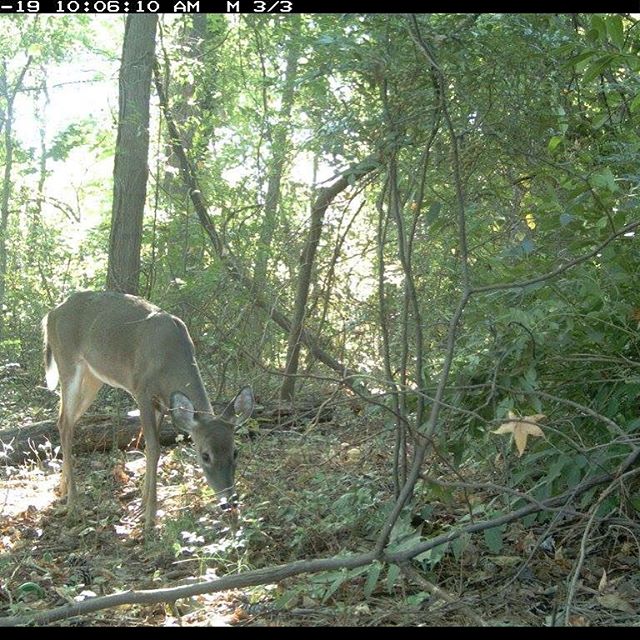 Unsurprisingly, plenty of deer claim the campus as habitat.

Ninety students and staff members, organized into 31 teams, completed the challenge. Participants came up with fun and creative team names, such as: eMammal GO; Show me the Money (and Animals); Smile, You’re on Canid Camera; and Mission Impossumble. The Libraries helped manage the teams, found sponsors, and offered prizes. All participants in the challenge received shirts and a chance to win a Reconyx camera trap. Additional shirts and hats were given to teams for their social media contributions. These prizes were provided by challenge sponsors, the Great Outdoors Provision Company, Puravida, and Reconyx.

“As a science major who has not yet participated in any form of research, this was a fun and eye-opening experience,” said Emma Feitcher, a Life Sciences sophomore.

In spring 2017, this partnership broadened its focus beyond only mammals to include plants, animals, and fungi. For the City Nature Challenge, volunteers added their pictures and observations to the North Carolina Museum of Natural Science's Natural North Carolina project. The project’s growing record of biodiversity is used for education, to study the impacts of climate change, and to watch the movement of native and invasive species over time. The Libraries also organized two nature walks as part of the City Nature Challenge.

“The Libraries brought an organizational home for the challenge,” Kays says. “The challenge benefited from three things the Libraries is really good at: loaning things out, in this case all the camera traps; being a home for presentations and discussions, which really came to life in the surround theater they have at Hunt; and providing an online presence for the whole project.”

Kiera Lauler, a freshman in Exploratory Studies, hit a core note in her response to the program: “It just reaffirmed how much I want to go into the field of science.” 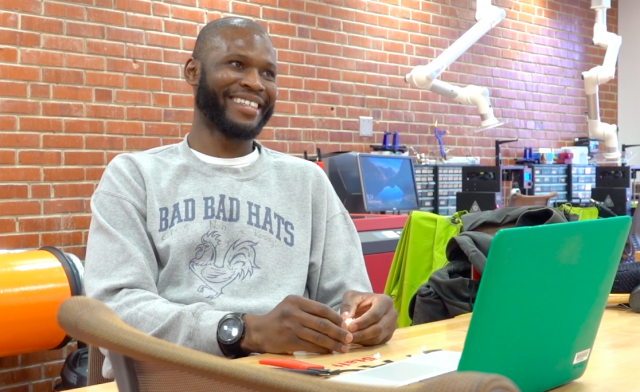 Making community in the Libraries Makerspace