Anthropology in 360°: Cultural immersion in the Visualization Studio 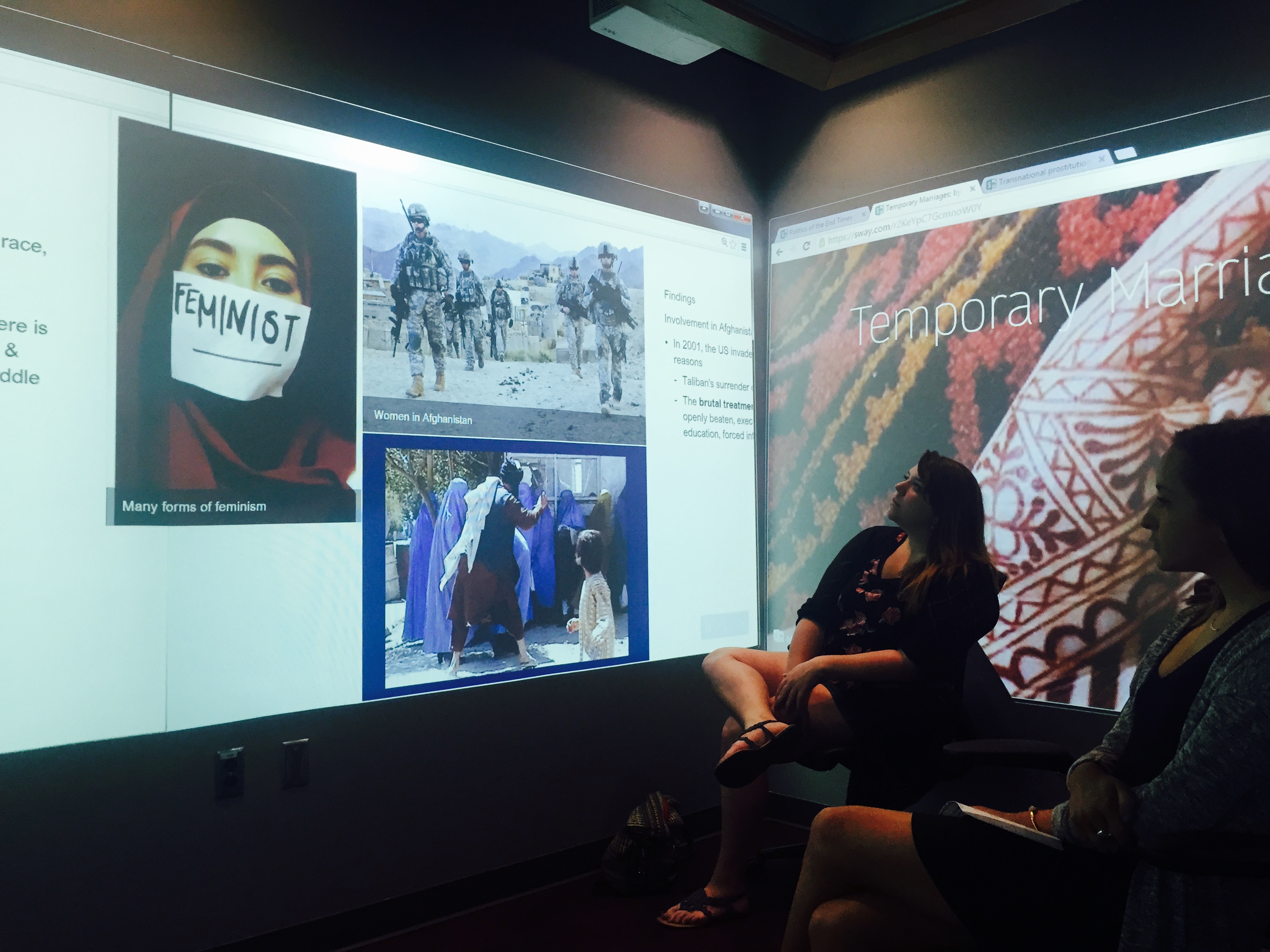 An anthropologist essentially lives his or her research. But that engagement rarely comes across in PowerPoint slides.

In fall 2015, Shea McManus’s anthropology students were out in the field. They were sitting down in living rooms and kitchens to conduct interviews within the communities they were studying. They were going to community events to engage in participant-observation and to scrawl exhaustive notes in notepads balanced on sweaty knees. And they were taking photographs, videos, and sound recordings of it all in order to document and analyze these communities. In other words, they were doing what anthropologists do.

When it came time for her “Research Methods in Cultural Anthropology” and “Qualitative Research Methods” classes to present their research, McManus wanted to do more than have her students stand up in front of the class with a slide presentation. Instead of snapshots and bulleted lists, the anthropology and sociology professor wanted her classes to feel immersed in the topics, the same way the students did when they were out in the field.

Enter the 360° Visualization Studio at the D. H. Hill Library.

“The Visualization Studio makes possible a rich presentation of knowledge and a more interactive environment for its communication,” McManus says. “I was immediately struck by the creative potential it offered students in my ethnographic research methods course.”

“What I liked about my students’ presentations—apart, of course, from their high quality and exciting content—was their all-inclusive character. The students were able to effectively use the Viz Studio to design presentations that drew all of us in, both as participants and audience.”

The NCSU Libraries’ Josephine McRobbie (then a Libraries Fellow) and Markus Wust (Digital Research and Scholarship Librarian) worked with students on the projects, helping them learn the Visualization Studio tools and present their work there. Using wrap-around projection to present field recordings, video interviews, graphs, and textual analysis, the students shook off early qualms and took to the challenge, deploying a variety of tools including using Sway, HTML, Tiky Toky, Google Slides, and panoramic field images.

“At that time, my students were conducting a semester of independent field research in a social setting of their choice,” McManus says. “In addition to written fieldnotes and interview transcripts, they also collected a lot of audio and visual material. The Viz Studio seemed to lend itself to the presentation of this kind of material in a way that a single screen in front of the classroom could not.”

McRobbie spoke with Nikole Kelly, one of McManus’s graduate students, about immersive anthropology in the Libraries’ visualization space. 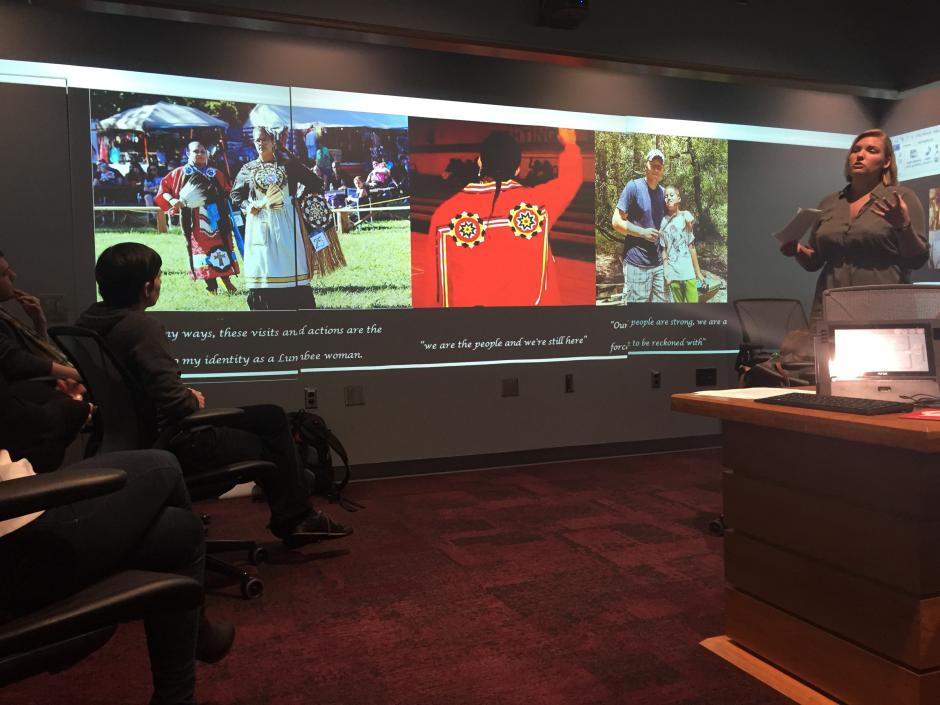 Josephine McRobbie: What was your research project about?

Nikole Kelly: My research was an ethnographic study of Lumbee cultural practices as a form of tribal solidarity. Essentially what I looked at were heritage practices that the Lumbee performed through powwows, smudging, and presentation ceremonies and how those actions reify tribal and individual identity.

JM: What kind of technology did you use to bring your project into being?

NK: For the presentation I used a number of different media to bring the presentation to life. I used several still pictures that I wanted up during the entire presentation. I used two video recordings (at the beginning and conclusion of my presentation), that I gained during my ethnographic fieldwork. I also had a script running along the bottom of the pictures that were quotes from my informants.

JM: What did you like about using this kind of non-traditional presentation space? What was challenging?

NK: I really liked how interactive the room was and that I could have multiple images, videos and texts running at once. The interaction was by far the best aspect of the room and I relied on this feeling of closure and unity to further depict themes in my project. The challenges came mostly from constructing the media to fit the room. Learning how to operate the room did take a while but it was certainly worth it.

Fast-forward to 2016, when Mira Waller, the Libraries’ Associate Head of Collections and Research Strategy, became McManus’s subject liaison. McManus worked with Waller, Wust, and Library Technician Shaun Bennett to integrate the Visualization Studio into the curriculum of her “Anthropology of the Middle East” class, as well as her “Intermediate Seminar in International Studies.”

McManus drew on these experiences and crafted an ambitious final project for her Middle East students. Groups were tasked with exploring a research question based around a specific community or nationality, such as: 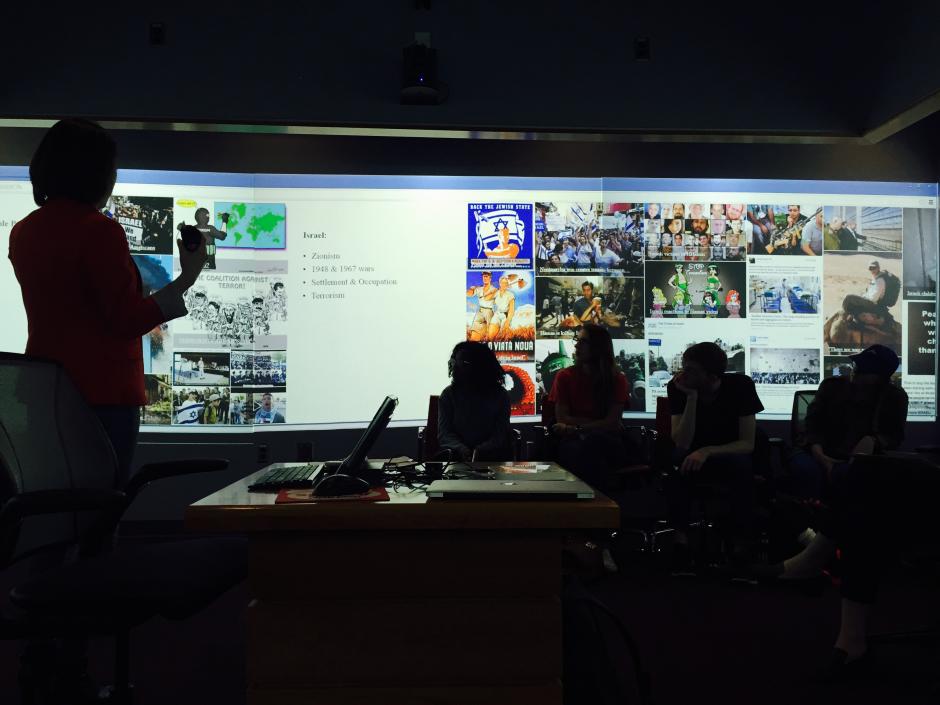 Each student used Sway to present their methods, findings, and argument on one of the four walls in the Visualization Studio, showcasing a dynamic mix of Skype interview transcripts, music videos, photography, news stories, and social media postings. This scrapbook-style digital presentation was annotated with text and citations and submitted to McManus for final grading.

“As we’ve worked with Shea, she’s refined her work in the studio and we’ve built a set of tools for the class to use that maximize the space,” Waller says. “Students will sometimes still surprise us and use a tool that we hadn’t considered such as Gamefroot, a game creator program.”

Dakota Frisby, a student in McManus’ seminar class, was hesitant at first about integrating visualization into her classwork. But he quickly saw the advantages that a more engaging final project gave him.

"While I wasn't the most interested in wanting to try this,” Frisby says, “getting to learn how to present on four different walls for a presentation without PowerPoint was a fun learning process. The Viz Studio made me more comfortable in presenting to my peers since they weren't focused on me but on the walls surrounding them.”

“More classes should get to use this room for presentations, because the creativity that it allows the students to have greatly improves the quality of the presentations and the interest level of those watching the presentation." 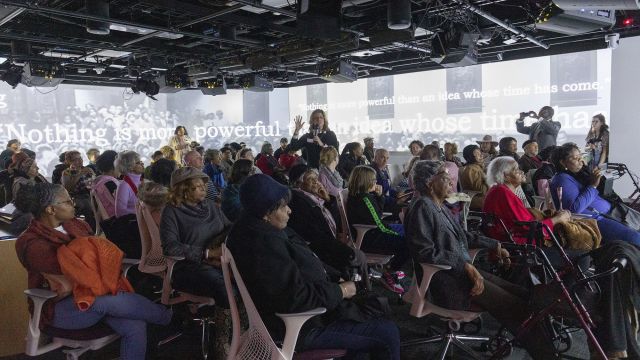