Code+Art brings together creative and computational thinking to bring digital art to the library’s visualization spaces. 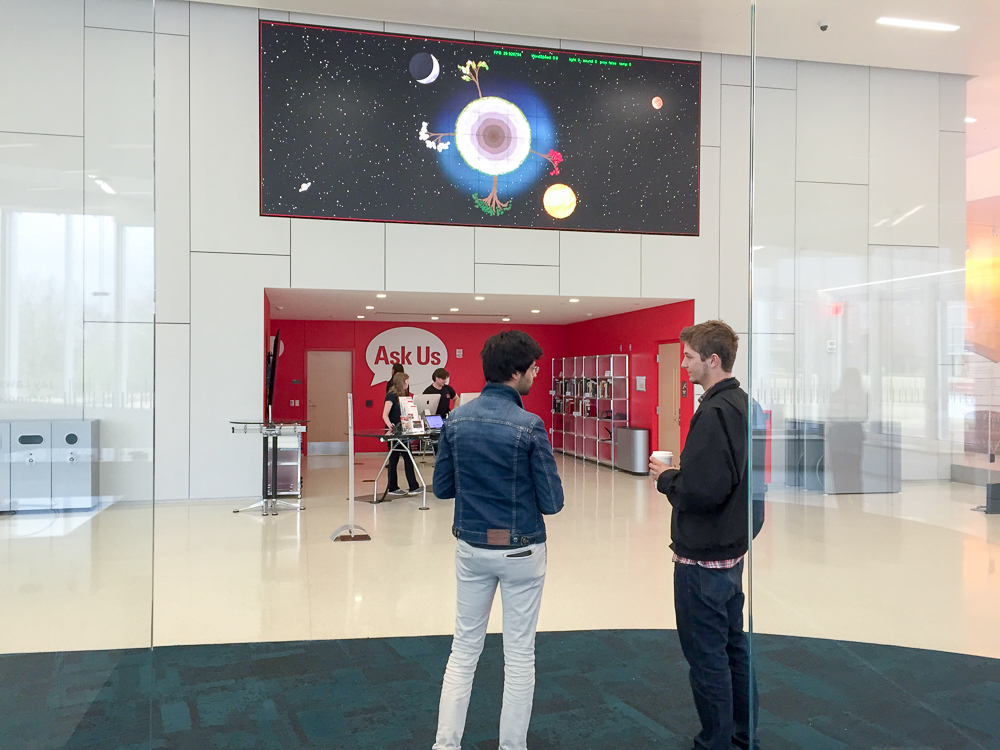 The Code+Art program was launched in 2014 to promote student and faculty engagement with creative coding through workshops, meetups, speaking events, contests, and residencies. Code+Art brings together creative and computational thinking to bring digital art to the Libraries' visualization spaces.

Focusing on the computational form of art known as “generative art,” this program offers a path to link disparate fields through software-driven visualization projects. The Code+Art Student Visualization Contest is currently in its third year. Although we encourage generative art entries, we also accept entries from students in the areas of digital art, animation, and artistic data visualizations. We look for ever-evolving animated visualizations so that visitors who frequent the library, often staying for long periods of time, could look at a single piece multiple times without ever seeing the exact same thing twice. While this kind of art has been around in some form for more than 50 years, large-scale visualization walls like ours are creating a new market for it, and our students appreciate the opportunity to add this kind of work to their portfolios.

The Code+Art program continues to seek both student and faculty-created digital art and visualizations for display in the Hunt Library, and is currently exploring options to host artists-in-residence.

The Code+Art Student Visualization Contest has been sponsored with two $5,000 gifts by Christie Digital Systems during the three academic years between 2014-2017.

A key factor for the success of the contest was reaching out to students, faculty, and staff at NC State. In order to generate awareness we partnered with Ben Watson’s computer science class to help develop proposals. Proposals were also cultivated and workshopped through two meetups that were held in the fall semester, showcasing generative artwork from the NC State community. An online community of practice was also established through the Code+Art Google+ community.

Teams work with Libraries staff to develop, test, and implement their projects. A jury of faculty, students and library staff, judge proposals and finished pieces based on their creativity, feasibility, spatial relevance, audience appeal, and future development possibilities.

More than 70 students participated in the visualization contest over three years resulting in 36 finished pieces, a number of which were the products of undergraduate research projects. Approximately 100 people attended each of the Code+Art Award Ceremonies and participated in the interactive debut of the students’ work. Winning entries and other submissions are still displayed in the James B. Hunt Jr. Library. Several of the Code+Art participants have indicated to us that the contest allowed them to try creative coding for the first time, expanding their job and internship application portfolios into new areas.