In commemoration of the 100th anniversary of U.S. participation in World War I, Special Collections continues its examination of the impact that the war had on NC State students, faculty, and campus.  The post below focuses on agricultural conventions held on campus and the work of the North Carolina Agricultural Extension Service.

During the 1910s NC State College hosted the annual Farmers’ and Farm Women’s Convention.  College faculty, as well as personnel of the North Carolina Agricultural Extension Service (an earlier name for what is now NC Cooperative Extension), helped organize the events, presented the lectures, and conducted demonstrations of agricultural and home economics techniques and practices.  For the two years of American involvement in World War I (1917-1918), these conventions provide a good window into the impact of the war on agriculture and rural citizens.  The best Special Collections Research Center resource for studying this is Extension Farm-News, the weekly publication of the Extension Service.  It is the source of most information in this blog post.

Grow as Much as You Can 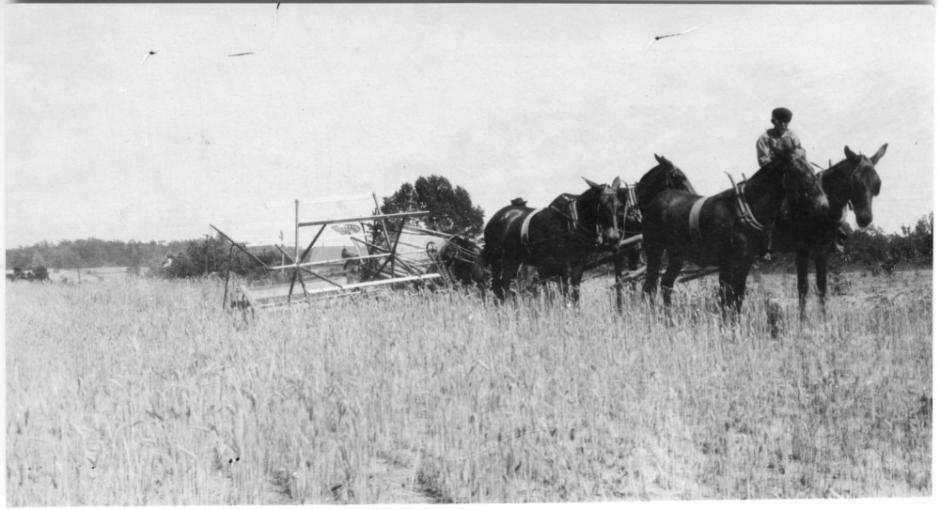 One thousand people attended the 1917 convention, held August 28-30 of that year, and food production and conservation were the leading topics.  The promotion of crop and animal production would increase the supply of food available for the U.S. military and our European allies.  The convention held a “Good Seed Day,” and a “Good Grain Day,” as well as demonstrations of weed control and lime application.

Almost immediately after the war declaration the previous April, the Agricultural Extension Service had begun a campaign to help farmers boost food production.  The April 14 issue of Extension Farm-News claimed “wars are not only waged with guns and shells; they are fought along economic lines, with food, clothing, and shelter as three empirical fundamentals.”   The situation was serious:  food shortages existed in the U.S. and locally because of bad weather, in Europe because former farmers had become soldiers or war casualties, and worldwide because of increased demand and decreased supply.  The weekly concluded that the “rural United States looms up greater and more significant than ever before in its position of patriotic civilian citizenship, in producing crops and feeding the urban world.”  That spring and summer, it regularly carried urgent headlines:  “Pork production is a patriotic duty, and it pays,” “Grow more food and feed crops,” “Let our slogan be this year: the highest yields per acre possible,” “Urgent demand for peanuts,” and “Grow more wheat.”  The 1917 Farmers’ and Farm Women’s Convention certainly carried the same messages.

Can as Much as You Grow 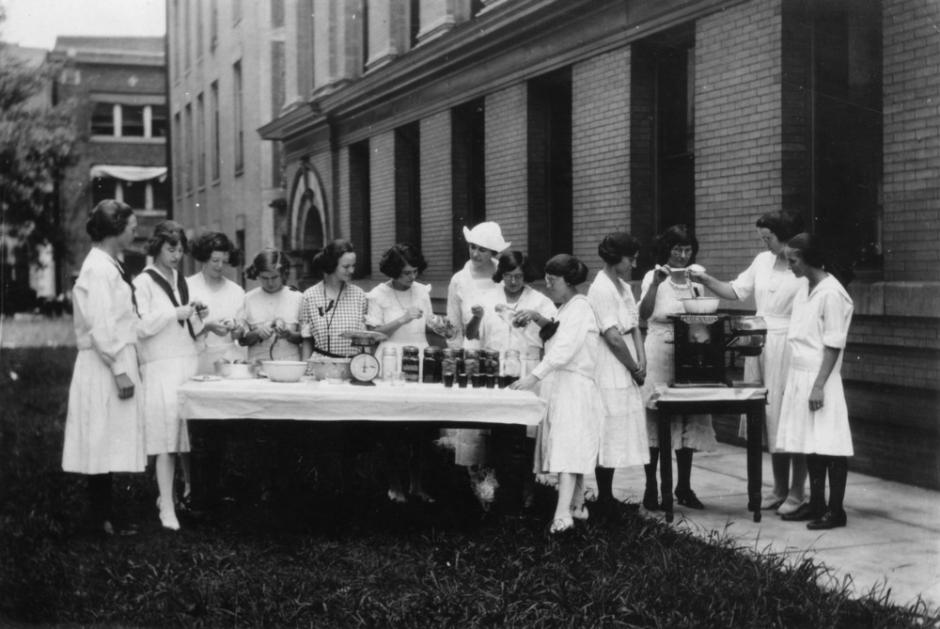 The convention’s program for farmwomen focused on food conservation in order to direct farm families to consume more food they grew themselves and not purchase food needed for the military and allies.  These activities went hand-in-hand with U.S. Food Administration efforts to encourage Americans to consume less of certain foods so they would be available elsewhere (this federal agency promoted “wheatless” and “meatless” days). 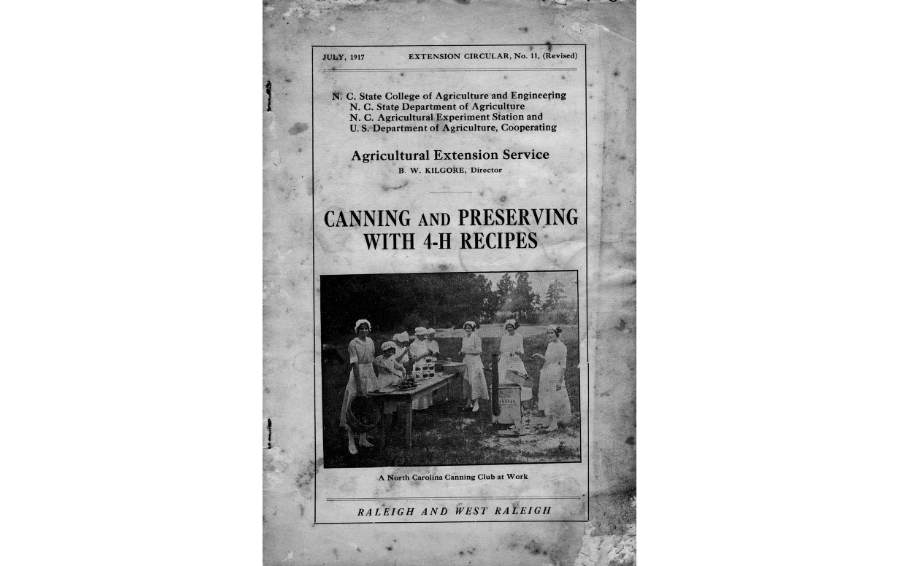 At the convention, Jane McKimmon and the home demonstration agents conducted presentations on canning, drying, and brining, all activities for preserving food.  There were several demonstrations on making cottage cheese and buttermilk cheese, both ways to extend the shelf life of milk (cottage cheese was also considered a meat “substitute”).  Women learned how to use cornmeal to save flour (made from wheat) and to serve leftovers creatively (reducing wastage).  The home demonstration canning program predated the war, but it ramped up with the declaration of hostilities.  At a canning school and conference held on the NC State campus in June 1917, agents canned blackberries, string beans, and tomatoes under the shade trees, and McKimmon exhorted canning club members to teach canning practices to women unfamiliar with the techniques.  That summer canning recipes appeared periodically in Extension Farm-News.  In the weekly, and almost certainly at the canning school and convention that summer, McKimmon and the home demonstration agents promoted their publications on foods and household conveniences and canning and preserving.

“Save the Farmers for Farming” 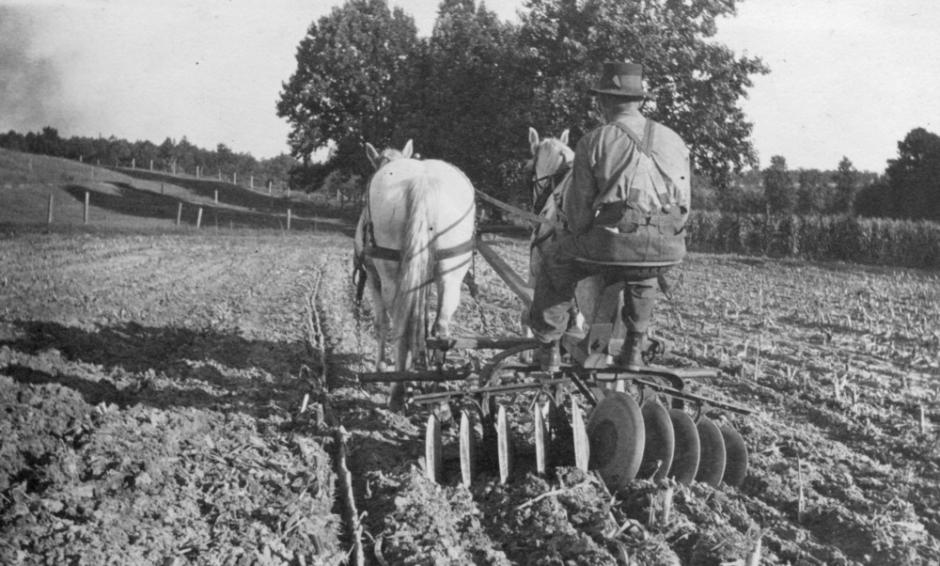 While a focus of the North Carolina Agricultural Extension Service was food production, it ran headlong into conditions on the ground:  labor shortages.  With the draft of young men into the U.S. Army and Navy, and with the cities enticing rural people to higher paying industrial jobs, there was a shortage of farmworkers.  As early as June 1917 county extension agents reported idle land with no one to work it.  In September 1917 Extension Farm-News carried the headline “Labor must be utilized for production, first” and complained “it seems almost impossible to put more hands on the farms, because they are not to be found in either country or in towns.”  The following year saw no letup of the crisis, as articles declared “Save the Farmers for Farming” and “Overcoming the Scarcity of Labor.”

Despite this, the government called for increased production goals, as much as 10 percent on many commodities.  So Extension Farm-News continued to publish articles exhorting farmers to “Help Halt the Hun – Grow Food Crops” and More Food Must Be Produced This Year.”  The government encouraged people to cut back on consumption of certain foods, although it never implemented rationing during World War I, and Extension Farm-News made “A Call for Voluntary Rationing of North Carolina Families,” and it claimed “Food Saved Is Food Made.” 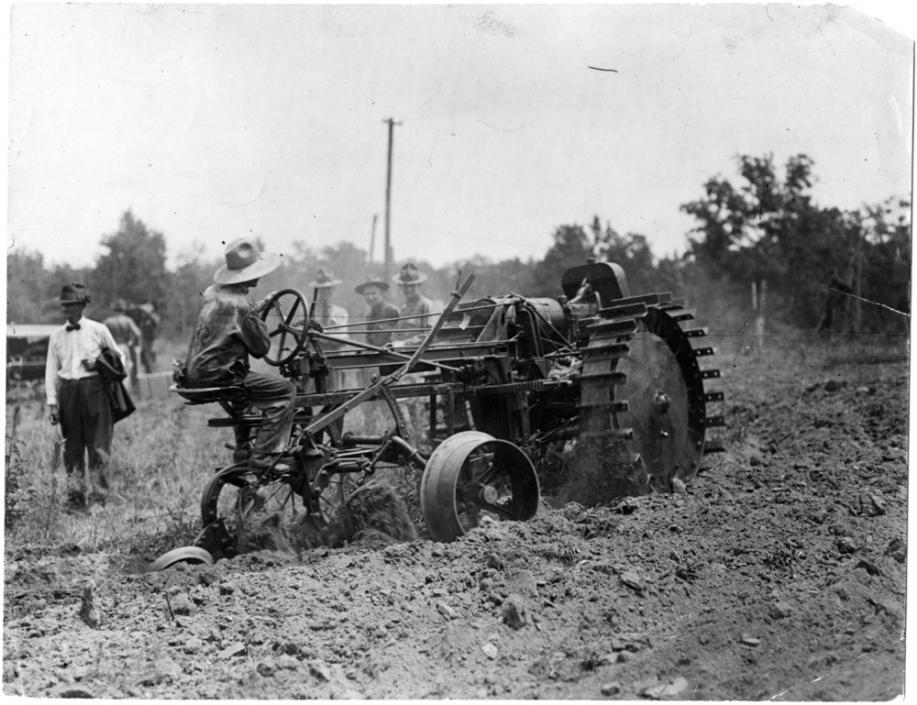 The solution to higher production demand and lower labor supply, at least according to the Extension Service, was technology—in the form of tractors. During the 1910s, tractors were not yet fixtures on North Carolina farms, and “horsepower” literally meant power provided by horses and mules.  During the war, however, it was thought that tractors could make North Carolina farmers more efficient and productive.  In addition, replacing animals with equipment meant less land needed for pasture, resulting in more land for cultivation.

Extension began promoting tractor use during the summer of 1918.  Extension Farm-News published articles on the machines, and they were used on the farms at NC State College.  They were a big draw at the Farmers’ and Farm Women’s Convention in August of that year.  Two thousand farmers attended the tractor demonstration on August 28, twice the total convention attendance of 1917.  In fact college President Wallace Riddick, in his annual report to the Board of Trustees, claimed there had been no previous convention with such high attendance.  Twelve or thirteen makes were displayed, and that probably included Fordson, International Harvester, and Moline models.   Extension Farm-News reported “many of those present stated that this was one of the most valuable phases of the entire Convention.”  Riddick exclaimed “those present cannot have failed to gain much valuable information.” 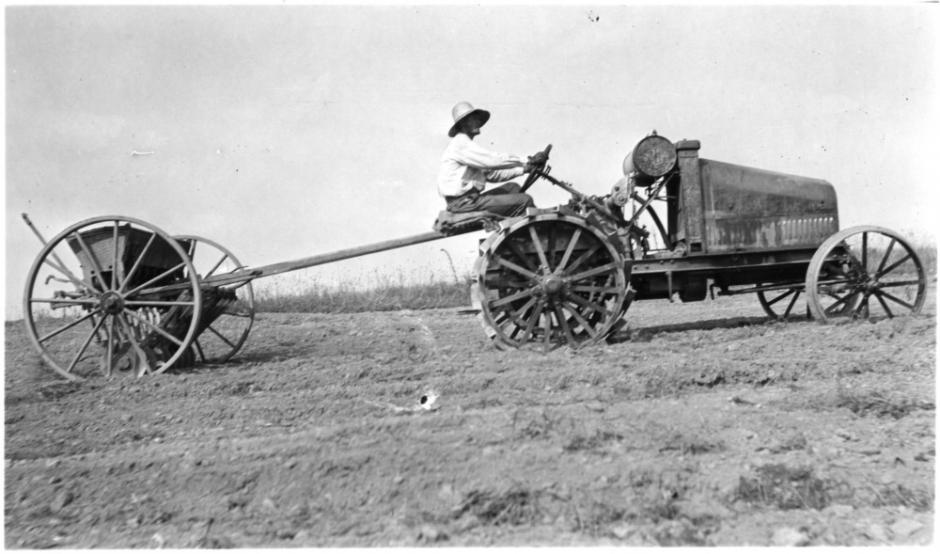 As the pictures show, the 1918 tractors were not the same machines we know today.  They were rudimentary and difficult to use.  They look as though they would have torn up the fields if not handled property, and they certainly weren’t ergonomic!

Despite the high interest in tractors in 1918, North Carolina farmers did not rush to purchase them.  The cost was too high compared to typical farm incomes, and only a small number of people could afford them.  When the war ended (less than three months after the 1918 convention), demand for agricultural products sank, prices plummeted, farm incomes shrank, and the efficiency imperative evaporated.    While the number of farmers using tractors gradually increased over the next few decades, it wouldn’t be until after the next world war before they became the standard equipment on farms.

Other Special Collections News Articles about World War I

Who was Eliza Riddick?