A Look Back at Women's Basketball 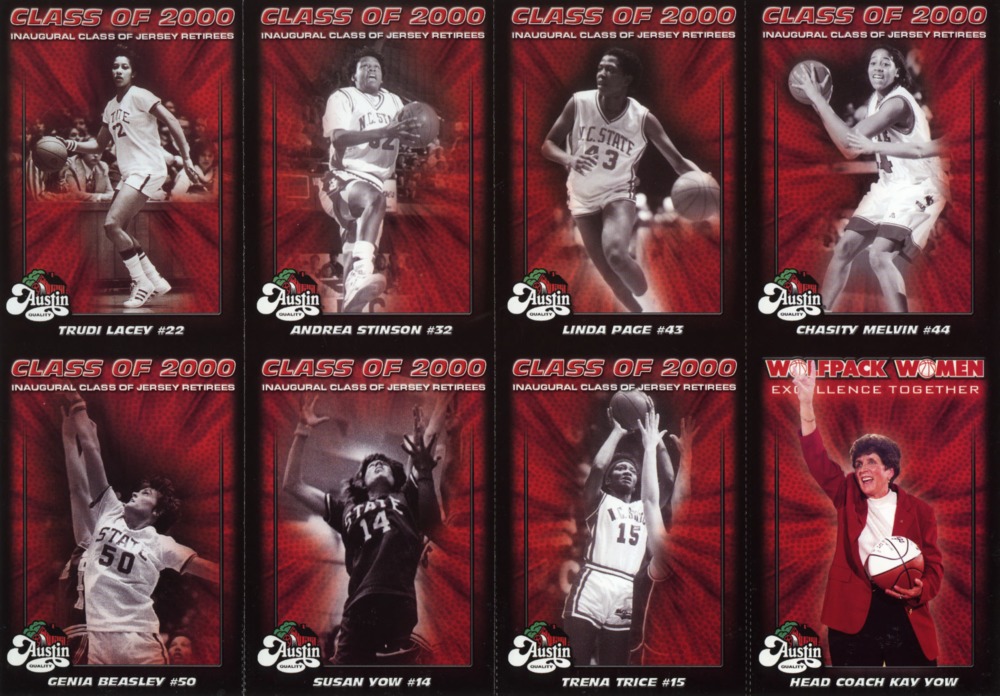 Before college sports came to an abrupt halt, there was some exciting news for NC State fans. The women’s basketball team took home their fifth ACC tournament championship with a 71-66 victory over Florida State!  This was their first ACC championship since 1991.  And while one wonders what else could have been for the 2020 season, the win continued a storied legacy:  since their beginning in 1974, State has been to the Sweet 16 thirteen times and to the Final Four once, in 1998.  Here’s a look back at some of the players who made their history so special.

Genia Beasley's accolades are many: the first NC State women’s basketball player to score over 2000 points, All-American in 1978, and ACC tournament MVP in 1980.  She won gold medals at the Pan American Games, Senior Pan American Games and World University Games. After coaching at the college level, she returned to school in 1988 and received a Ph.D. in optometry.  She now owns her own practice.

Trudi Lacey was the first African American women’s basketball player at State to play on scholarship, from 1977 to 1981.  From Clifton Forge, Virginia, Lacey helped fill some of the void left by Genia Beasley. She helped the Pack win their first ACC tournament in 1979 and is one of a select group of players who have scored over 1000 points.  After NC State, she represented the U.S. at the World University Games by bringing home gold medals in 1981 and 1983. She went on to a successful coaching career, including stints at Francis Marion University, University of Maryland, and Johnson and Wales.  She also coached in the WNBA for the Charlotte Sting and Washington Mystics. She is currently the athletic director at Johnson and Wales.  As revealed in a Technician article from December 1, 1980, she strove for perfection on and off the court:

Linda Page burst onto the college stage from Philadelphia, where she had once scored over 100 points in a high school game.  Nicknamed “Hawkeye” for good reason, she rarely missed a basket. She scored over 2000 points in her career and helped lead the Pack to regular season ACC championships as well as a tournament championship in 1985.  After NC State, she became a juvenile probation officer and authored a book, Love, Pain, and Passion - The Heart of a Champion.

In 1998, the Pack made their deepest run in the NCAA, defeating the famed UConn Huskies to reach the Final Four.  This was partially due to the leadership of 6’3 power forward Chasity Melvin, who scored 37 points in the semifinal game.  She was an All-American in 1998 and was voted one of the top 50 athletes in the ACC.  She was named Rookie of the Year in 1995. She played for 12 years in the WNBA then embarked on a coaching career.  She also worked for the Kay Yow Cancer Fund and wrote a book of basketball recollections, At the End of the Day.

The common denominator that all these women share is that they were coached by Kay Yow. With a 680-325 record, Yow inspired many more women than Beasley, Lacey, Page, and Melvin during her 34 year tenure as head coach at NC State.  She won four ACC tournament championships and went to the NCAA twenty times. In 1988 she coached the USA women’s basketball team to a gold medal at the Seoul Olympics.  She will also be remembered for her courage and perseverance after her diagnosis of cancer in 1987. She founded the Kay Yow Cancer Fund and won the Espy Award for Perseverance in 2007.  She succumbed to the illness in 2009.