Katharine Stinson: “In her own house” 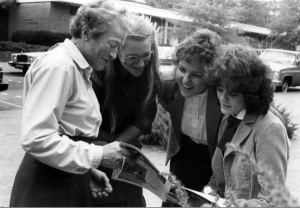 [/caption]
In the early twentieth century many women faced challenges entering historically male-dominated fields at colleges throughout the country. In 1941 Katharine Stinson became the first woman to graduate from NC State College with a degree in engineering. A year later the mechanical engineering major made history again when she became the first woman to work at the Civil Aeronautics Administration (CAA). A look in the Katharine Stinson Papers, 1937-200 1, available from the NCSU Libraries Special Collections Research Center , reveals some of the challenges/stereotypes Stinson faced as a female NC State student and as a woman climbing the career-ladder in a predominantly male field.

Because women were prohibited from entering State College as underclassmen, Katharine Stinson spent a year at Meredith College, where she took an astounding forty-eight hours worth of credit, in hopes of gaining admission to State's engineering school the following year. When Stinson entered State College in 1937, she was the only female student registered in the School of Engineering. Stinson summarized her experiences and her desire to studying engineering in the May 1940 edition of The Wataugan, State College’s humor magazine. In an article entitled “Meet the Coeds” Stinson stated, “This is a technical school and one which requires hard work from its students, and few girls would enter or remain here unless they were in earnest and sincerely ambitious. So many courses are required which aren’t offered in other schools, and it decidedly would benefit girls who seek to follow their desired work.” The magazine described Stinson as a “quiet, unassuming girl, sincerely interested in her work” and detailed her membership in many student organizations, including the American Society of Mechanical Engineers, the State College Flying Club, and the Institute of Aeronautical Sciences.

As the first woman to work at the CAA Stinson received a lot of media attention. The Raleigh News and Observer stated, “The Civil Aeronautics Administration has shattered precedent by employing an engineer who wears a skirt instead of trousers.” By 1942 the CAA had hired three additional female employees, causing Washington D.C.’s Times-Herald to run the headline “’Man-Handled’ Technical Jobs in CAA Turned Over to Women.” The article stated, “Four women in the engineering department of the Civil Aeronautics Administration are doing their best, these days, to prove that it’s no longer a man’s world. With trained male civilians donning uniforms, these four women are holding down-and doing well-jobs which men would occupy in peace times.” This article suggests that women, like Stinson, would not have jobs in skilled technical fields had the demands of World War II not necessitated their presence. Upon her promotion to Assistant Director of the Specifications Department of the CAA in 1946, the News and Observer ran another article spotlighting Stinson as a highly trained engineer. However, instead of printing images of Stinson in her office redesigning airplanes, the N&O ran images of Stinson icing a cake. The article ended stating, Stinson lives “in her own house in Chevy Chase, Md.” The emphasis on Stinson’s home ownership as a single woman suggests that Stinson’s situation was uncommon in the 1940s, perhaps something to be seen as special.

The university recognized Stinson and her successful career in aeronautics in 1997 by renaming North Yarborough Drive in her honor. To learn more about Katharine Stinson or the NC State College of Engineering, please visit the Special Collections Research Center.