Our buildings are not open, but our online services continue. Libraries Coronavirus Response

Honoring the Caregivers of the 1918 Flu Pandemic, Part 1 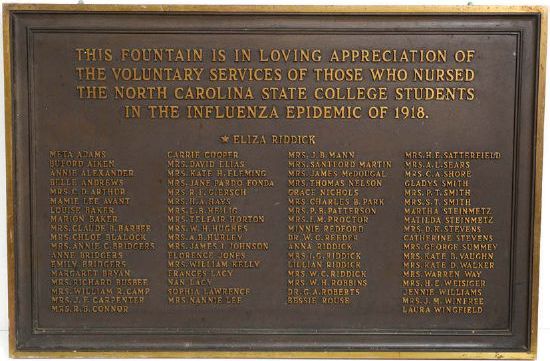 During the current COVID-19 pandemic, we wanted to look back more than 100 years at the 1918 influenza pandemic and its impact on North Carolina State University (then called North Carolina State College of Agriculture and Engineering).  In this and a future Special Collections News post, we will specifically we look at the women who were the caregivers, both those who served on the NC State campus and those Extension agents who served throughout North Carolina.

In 1918, the college was unprepared when the “Spanish Flu” hit, and hundreds of students became sick within a matter of days and had to be cared for in-place on campus.  A total of 450 came down with the illness during the course of the 1918-1919 academic year (at one time 300 were ill simultaneously), and 13 students died.  Enrollment was about 1000, so the pandemic had a huge impact on the student body.  We reported on this in a 2018 post.  Also, the Fall 2018 issue of NC State alumni magazine published an extensive article about this, and a recent NC State News article also described the 1918 pandemic on campus.

In 1918, the NC State infirmary (you could call it a predecessor to today’s Student Health Services) was a small affair, with just one doctor, one nurse, and support staff operating out of the building now known as Winslow Hall.  With 300 students sick at once, the infirmary was too small to hold them all, and most were cared for in the YMCA Building (the site of today’s Kamphoefner Hall).

The Women Who Nursed the Students

With a shortage of medical staff, approximately 70 women from the Raleigh community came to care for the students.  Many were the wives, daughters, and other relatives of the college’s faculty and staff.  Few of them (maybe none), were professional nurses, but they came to campus anyway.  They were honored in the Agromeck yearbook published at the end of the 1918-1919 academic year, their names listed out and juxtaposed on a page opposite that with the names of the 13 students who died.

Two of the women nursing the students died from the influenza themselves.  One was Eliza Riddick, the niece of college President W. C. Riddick and daughter of Raleigh physician I. (Ivey) G. Riddick.  Special Collections News reported on her back in 2017 and 2018. The loss of Eliza Riddick deeply affected many students.  She had worked in the college administrative offices prior to the epidemic and was known already to many on campus.  On the first anniversary of her death, a group of students laid flowers on her grave.  The other woman who died was Lucy Page, but we know little about her, unfortunately.

Tributes to the Caregivers

In addition to the yearbook, the college also commemorated all of the women a few years later by installing a fountain and erecting a plaque in the YMCA Building.  The plaque still exists today as part of  the University Archives.  In 1922, a fountain was also erected at the Raleigh courthouse to “perpetuate the memory” of Eliza Riddick and Lucy Page and to commemorate the hundreds of women who had volunteered to nurse the sick in Raleigh during the epidemic.  In addition, an Eliza Riddick medal was established at NC State, awarded to the winners of college debating contests.

Forgotten in all these honors and remembrances was the infirmary’s African American support staff, reflecting the racism of the time period.  One of those staff members was Ellen (or Ella) McGuire, who had worked in various positions since the college’s beginning.  In 1925 McGuire was interviewed by the Technician student newspaper.  Despite the horrible editorial decision to depict her voice in a demeaning dialect, through this interview McGuire briefly tells us what she witnessed during the pandemic and gives us an important firsthand account of conditions on campus.

In a week or two, we will post another article about the Home Demonstration agents in the Extension Service who cared for the sick in numerous North Carolina communities.

You can’t come to the library to look at the University Archives and Special Collections materials, but you can explore our digital collections.  And we look forward to welcoming people back to our reading room after the COVID-19 crisis has passed.