From the Collections of John D. Wray and S. B. Simmons 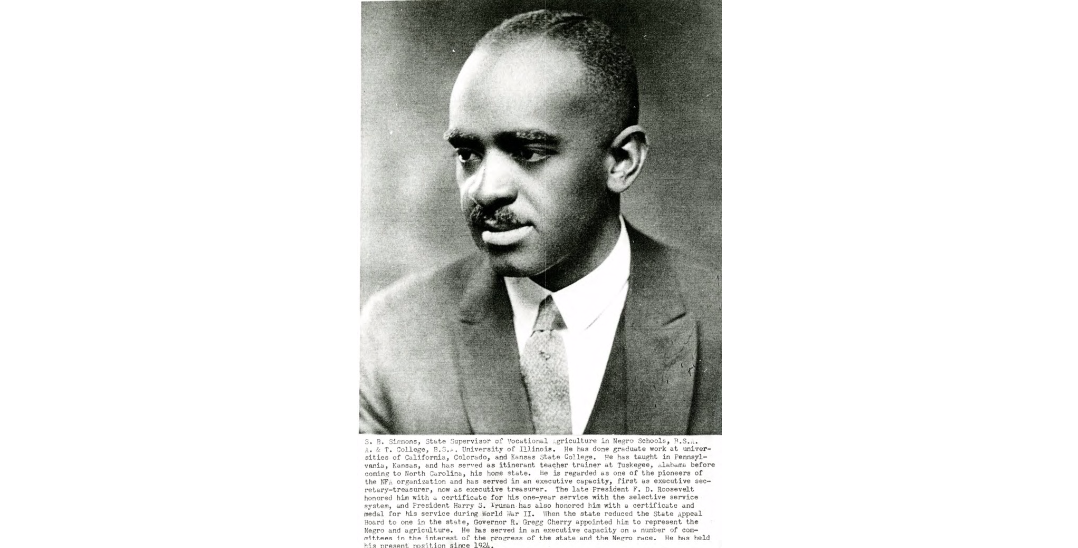 He was one of the founders of the National Association of New Farmers of America (NFA), a vocational agriculture organization for African American youth. Simmons brought this organization to the Tarheel State as the North Carolina Association of NFA. The NFA and the Future Farmers of America (FFA) would merge together in the mid-1960s. As state director and through the North Carolina NFA, Simmons impacted the education of thousands of African American youth via school programs, camps, conferences, broadcasts, and competitions. Highlights from the Simmons collection include several photographs of young African American men and women at various camps, demonstrations, and conferences learning different agricultural practices, from curing tobacco to herding livestock.

John D. Wray (1877 - 1937) was the state’s first African-American club (later 4-H) agent, or “Negro Club Leader,” beginning in 1915. He organized the first agricultural clubs in counties that up to that time did not have African American extension agents. The first clubs for homemakers, crop rotation, peanuts, and cotton were started during his 10 years as an extension agent. His office was located on the campus of NC A&T.

Like Simmons, Wray also previously worked for the Tuskegee Institute before coming to North Carolina. His writings of proper farming techniques were circulated to state and national newspapers. Like Neil Alexander Bailey , the state's first African American extension agent, Wray specialized in the research of corn production, and his thesis on this topic is now available online. He later became an instructor of vocational agriculture at the Laurinburg Institute, and a professor at Florida A&M University.

More on the life and work of John D. Wray can be found at John D. Wray and the Fight for Black Farmers - NC EATS .

The resources currently available in the Better Living collection continue to grow, and there will be many more to come on the life of John D. Wray, S. B. Simmons. and others who helped to advance the agricultural practices of North Carolina.

If you would like to learn more about the Special Collections Research Center and our digitized materials, please visit NCSU Libraries’ Rare and Unique Digital Collections , which provides access to thousands of images , video , audio recordings , and text materials documenting extension history and other topics.