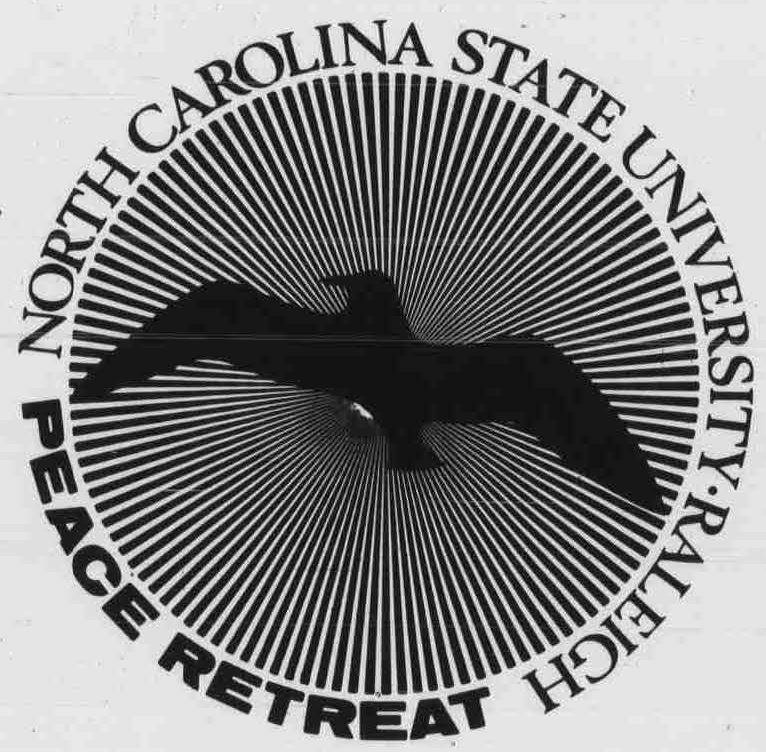 A few weeks ago, Special Collections News posted an article on the 50th anniversary of Cathy Sterling becoming the first woman to serve as NC State’s Student Body President.  Within days of her election in May 1970, she found herself leading protests against the Vietnam War.   In this post we will look at the how the campus continued to examine the war, through an educational event (or, in the language of the era, a “teach-in”) called the Peace Retreat.

Sterling and others led an antiwar march on the North Carolina State Capitol on 8 May 1970, as campuses all over the United States erupted in protest and violence following the Kent State shooting.  Sterling then called for a “Peace Retreat of the University as an extension of the march” rather than protests and class boycotts.  (All quotes in this posting are from the Technician student newspaper.)  “The retreat is not a blank check for students to begin summer vacation two weeks early,” she said.  Rather, it was an alternative to classes in which students could learn more and participate in discussions about the Vietnam War.  A Technician editorial stated that “the retreat Sterling is calling for is one which would give students a chance to turn to ‘study and discussion of the issue of the Southeast Asian War, and the events of the past week . . . ,’” adding that “it is not a leave of absence for students to hit the beaches three weeks early.”

Sterling, Tom Schwarz, Gus Gusler, and others organized the Retreat and made a proposal to the university that students could work out (with their instructors' approvals) methods for attending the Retreat rather than class.  This was presented at a Faculty Senate meeting on May 12.  The senators ignored the proposal and instead approved a recommendation that activities “in responsible efforts to study national issues and to influence national policies” could be considered by instructors as “authorized extra-curricular activities.”  Under this, if students participated in the “extracurricular activities” instead of classes then they would receive an incomplete or an excused absence and the classwork would need to be made up.

Afterword, hundreds of students met in the union and organized a rally supporting the student proposal.  The Technician reported the next day that “over 1,000 students marched through campus at 11:30 last night recruiting students for the peace vigil at the Union Plaza [Brickyard],” and it added that “the students marched with marshalls through the residence hall areas chanting anti-war slogans.”

Students then brought the matter before a full faculty meeting on May 13.  Immediately before this 500 students (according to the Technician) marched through residence halls again to gain support.  Then they went to wait outside Nelson Hall, where the faculty meeting was held.

Inside, nearly 500 faculty members met for 2.5 hours in the Nelson Hall auditorium, which lacked air-conditioning at the time.  The Technician reported that the temperature was more than 100 degrees, and during the meeting “students brought in cokes for the faculty members who were by that time thirsty.”  Sterling and a few other students presented to the faculty a position paper proposing methods in which students might attend without penalty the Peace Retreat instead of class.

It is obvious from the overwhelming student response to the Kent State University deaths, that students are not only concerned, but in fear, that their rights to expression, even to life, are seriously threatened in such a polarized society as presently exists.  In order to alleviate this situation we feel that all available means of communication should be implemented to resolve this crisis.

The new student body president continued, reading from the paper:

This student involvement in the wider educational process does not call for academic penalty, rather it calls for encouragement by the academic community.  Therefore, it is recommended that students, after individual consultation with their instructor and with his approval, be allowed to elect any one of the following four alternatives with regard to grades in courses presently being taken:

(3) receive a pass/fail grade for the course, based on work presently completed

(4) receive an incomplete as a grade for the course and make the work up later.

Only once, at the very end, did the student position paper mention the Peace Retreat:  “In order to insure the faculty that students would participate in the peace retreat and not go to the beach we will provide faculty members with pledges which the student would sign now and at the end of the semester saying he will take part in the retreat activities.”

Sterling also indicated student support for the Peace Retreat and the grading proposal by stating that she had a petition with 4,650 signatures.  After she spoke, the faculty discussed “the educational value of the Retreat.”  The Technician reported that “many teachers were heard for and against the proposal” and that “several students spoke in favor of the proposal who were involved in its formation.”

Finally, the time came for a decision.  “The room was tense” reported the Technician; the vote “was so close no one could tell at a glance what the outcome would be.”  The newspaper added that “by this time the heat was stifling.”  After a second count, it was clear that faculty had voted 265 to 233 to support the student proposal.

“News of the faculty decision spread like wildfire through the crowd outside,” claimed the Technician, and immediately students ran outside Nelson Hall and yelled to those waiting:  “We won! We won!”  Students cheered as faculty exited the building, and “some of the faculty members greeted the students with raised fingers in the peace sign, while others moved out in disgust.”  Cathy Sterling announced to the crowd that “faculty members had placed their trust in the students and they couldn’t let them down.”

Preparations for the Peace Retreat began immediately.  On May 14, philosophy professor Tom Regan and a few students organized a “Fleece for Peace” on the Brickyard.  The Technician reported that the event was “for those shaggy people who will be canvassing local neighborhoods in connection with the peace retreat activities scheduled for the next few weeks.”  Organizers recruited local barbers to cut students' hair.  One student said that “this was just one small sacrifice that can demonstrate our sincerity about the anti-war effort,” although the student newspaper claimed that “some of the protestors with extensive hair length indicated that they would not stand for any sort of rape of the lock.”  Nonetheless, the general sentiment was that the clean-cut look would allow them to “relate better to the straight community.”  Tom Schwarz, one of the Peace Retreat organizers, indicated he and other students were about to canvas the Raleigh community “to gather public sentiment about the war,” and that with shorter hair “they feel they will stand a better chance at communicating with the local citizens, or as Student Body President Cathy Sterling put it ‘break down the communication block.’”

Later that evening a convocation was held in Reynolds Coliseum “to give direction to the Peace Retreat, to convey the feelings of the students to the faculty, and to give full support to student involvement on campus in the retreat, and to open the lines of communications for various campus factions.”  At the May 14 Convocation, Chancellor John Caldwell, Provost Harry C. Kelly, Faculty Senate President Leroy Martin, Student Body President Cathy Sterling, and other student leaders spoke.  The Technician estimated 2000-3000 attended, which it considered “a moderate turnout.”  In addressing the crowd, Sterling urged “great participation on the part of the students to express their views on the war . . . regardless of political beliefs.”

Chancellor Caldwell perhaps received the most attention, however, and his reluctance in supporting the Peace Retreat was evident in his speech.  He considered it good that “students and faculty as citizens are demonstrably taking a more active concern on national politics affecting the Nation and the human race,” but he voiced concern about things getting out of control, as he clearly believed was occurring at other campuses around the country where student protests had occurred.  He said that “responsible individuals, young and old, will have to seize these forces and guide them,” and he thought that the higher education system was at stake:

If we use these great concepts wisely, our Nation and the world will be benefitted and our universities will be saved.  But if the demands for relevance and the responses to them convert the universities into organized instruments for political action, the freedom of the university, and the individual rights of its members we can kiss good-bye.

The following week (May 18-22) the Peace Retreat began, and all indications are that it was without incident.  Hundreds of students (perhaps thousands) participated and learned more about the Vietnam War, similar to the 15 October 1969 Moratorium Day events that had occurred the previous fall.  The Retreat organizers compiled and distributed around campus information packs, a group of which were titled “Vietnam Crisis Research Reports” that had such subtitles as “How to Get Out,” “History,” “Gallup Polls,” “Expenditures,” “Congressional Research,” “Man Power,” and “Campus Crises.”  Faculty members gave lectures, such as one titled “Reasons for the Present Action in Vietnam,” and a Kent State University professor who had witnessed the shootings may have spoken.  To help pay for the event, students held a “trash-in” on the Brickyard to collect bottles and can that could be sold for scrap (campus recycling did not exist in 1970).  They also held a blood drive with the following purposes:

Primarily we are attempting to gather as much blood as we can to send directly to American Military personnel in Southeast Asia.  Through this concerted effort, we also wish to bring together people of diverse views on the NCSU campus and in the Raleigh community by establishing a common meeting ground—a personal commitment and concern for the American soldier in Southeast Asia.  Third and possibly the most important within the community to use the blood drive as a tool to bridge the generation gap.  By collecting and sending blood to them, we hope to show our people overseas that as Americans of different views, we are united in a common cause, a concern for their lives and their ability to return home safely one day.

Support of the Peace Retreat wasn’t universal, however.  On May 15 the Technician published a letter from a student who said “I feel ashamed of my school and faculty for their decision on May 13 in favor of the radicals . . . . I thought my school was supposed to be run by the majority and not just a few empty headed numb-skulls and opportunists.”  A letter published on May 18 claimed this about students participating on the Peace Retreat: "the majority are being led and misguided by a handful of anarchists who are intent on destroying this country."  The University Archives also holds a sign that reads “Should radicals control the campus?” and probably dates from the May 1970 time period.

The Technician also believed that the decision to allow the Peace Retreat “has been received violently in the Raleigh community, thanks mainly to the efforts of WRAL-TV,” which apparently labeled the retreat as a “strike,” said that the university gave students “amnesty” for not attending class, and called the retreat organizers “communists.”

At the end of May 1970, exams occurred on campus and the 1969-1970 academic year came to a close.  The Technician, in the last editorial it published that school year (May 20), claimed it has been “a most unusual year.”

As previously mentioned, all quotes for the posting are from the Technician student newspaper, especially these dates:  11, 13, 14, 15, 18, and 20 May 1970.  Additional information about the Peace Retreat can be found in the NC State University Student Government Records (UA 021.502), especially Boxes 10, 13, 14, 27, 30; the Cathy Sterling Papers (MC 00398); and other collections; all held by the Libraries’ Special Collections Research Center.  See also oral histories of Sterling and Gus Gusler.  Please contact Special Collections for assistance in accessing these collections after the current emergency ends.