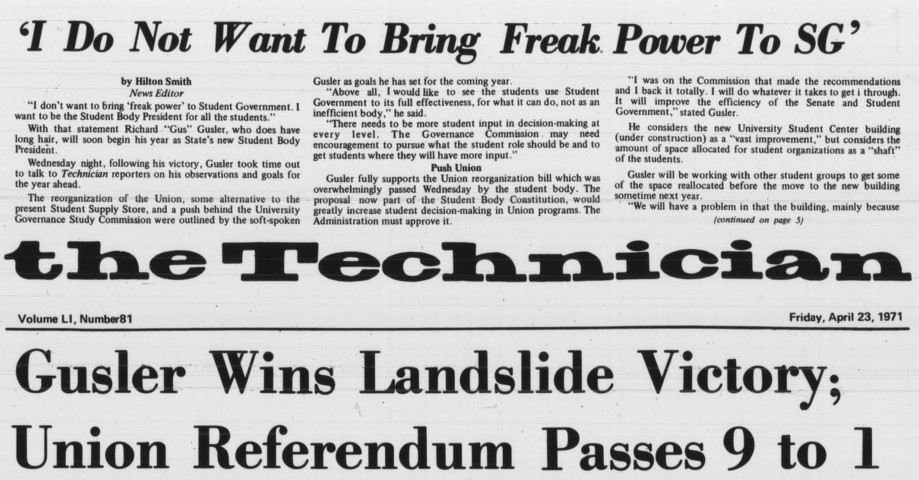 Gusler won the election in a run-off against his friend Bill Davis, possibly the first African American candidate to run for Student Body President at NC State.*   As Gusler described in a 2012 oral history interview, "I wound up winning, for the wrong reason, because clearly it was the racial attitude of an African American running."  While he considered not running against his friend, he laughed and said "I’m too competitive to do that."  He added "we remained really good friends, and I won by a huge landslide and it was purely because of the race thing. There was no doubt in my mind that was what it was."

Prior to running for Student Body President, Bill Davis had been president of the campus YMCA and a member of the Chancellor's Liaison Committee.  He received the endorsements of the Technician student newspaper and of Cathy Sterling, the Student Body President whose term was just ending.  The Technician saw him as Sterling's natural successor:  "Davis seems more interested in the serious problems of academic reforms and appears more disposed to call the conscience of the university to account for its actions."  Davis (along with former Student Senate President Eric Moore) also worked with the university to recruit more African American students.  Through this work he traveled to high schools around the state to encourage African American students to apply to the university.  He was also involved with the university's early Pan-Afrikan festivals.  Davis graduated with a BA in 1972. (Sixteen years after Davis ran, Kevin Howell was elected as NC State's first African American Student Body President.)

Although Sterling had not endorsed Gusler for Student Body President in 1971, he still considered her an influence.  In the 2012 oral history, he said about her "She was just really, really bright and just very good at looking at situations and thinking about things and coming up with a way to sort of push an agenda forward, but in a civil way. She was just very polite and very much a Southern lady, but tough, really, really tough."

Gusler served as Student Body President in 1971-1972.  Among the measures he advocated were the sale of alcohol on campus and the elimination of a two-semester foreign language requirement. His most significant contribution may have been establishment of the student Legal Defense Corporation to represent students’ interests in lawsuits.

After his term as president ended, Gusler was involved in April 1972 protests against the Vietnam War.  He graduated in 1978 with a BA in political science, and in 1980 also earned a master’s degree in public administration.  In 1984 he received his J.D. from NC Central University.  For several years he practiced as an attorney, specializing in sports law, product liability, and personal injury law.  He eventually bought and operated the Players' Retreat, a popular bar and restaurant near the NC State campus in Raleigh.

If you have questions about our collections or would like to see Special Collections materials, please use our online request form. Please also feel free to explore our Rare and Unique Digital Collections online.

Due to the NC State University Coronavirus Response, the NC State University Libraries Special Collections Research Center is open by appointment only.  Please note that according to Library policies, on-site Library access is currently limited to NC State students, faculty, staff, and university affiliates with a Wolfpack One Card, including Centennial Campus partners. For requests from these communities, we will respond to your inquiry as soon as possible and will email you when your requested materials are ready so that we can confirm your appointment time. For all other requests, we will respond to your request as soon as possible.

*At the time in 1971, the Technician claimed Bill Davis was the first African American candidate for NC State's Student Body President position, and we have not established that any other African Americans ran for the office before him.  If you know otherwise, we encourage you to contact us.