Our buildings are not open, but our online services continue. Libraries Coronavirus Response 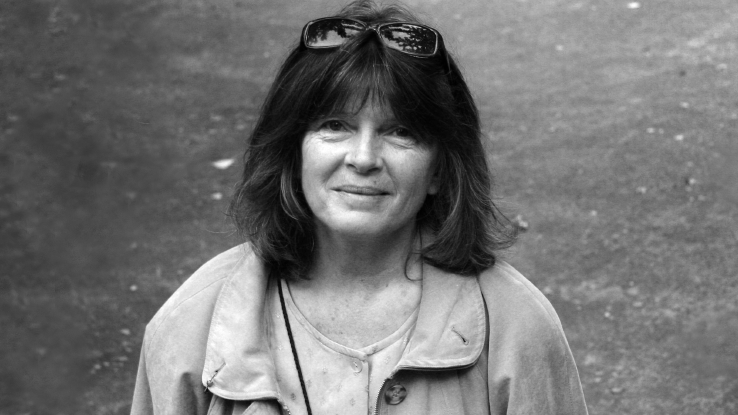 A week or so ago, poets and poetry readers and teachers everywhere, were opening their mail to find that the latest issue of American Poets, the Journal of the Academy of American Poets, had arrived. One look at the table of contents and it’s easy to feel the impact Dorianne Laux’s writing and teaching and service have had on American letters.

The very first piece in the American Poets issue features Threa Almontaser, a recent NC State grad and one of Laux’s former students. Almontaser’s The Wild Fox of Yemen recently won the academy’s prestigious Walt Whitman Award for first collections of poetry and will be published by Graywolf Press. An excerpt from a featured poem, “Heritage Emissary,” reads “Each rephrasing lengthens my nose. / I’m out of breath from so much code-switching, crunching / the sand it leaves between my teeth.”

Just ten pages later, Laux is announced, along with the highly-decorated Kevin Young, as the new Co-Chancellor of the Academy, a six-year term that includes electing the recipients of the Wallace Stevens Award and Academy of American Poets Fellowship and serving as an ambassador of poetry in the world at large. The announcement includes Laux’s poem “Blossom:” “Shake hands / with the unknown, what becomes / of us once we’ve been torn apart / and returned to our future, naked / and small, sewn back together / scar by scar.”

And later in the issue, as part of a section showcasing poems from recently published collections, readers will find Leila Chatti’s “Still Life with Hemorrhage,” from her collection, Deluge, out now from Copper Canyon Press: “At the center / of the scene: a woman on a mattress / on the floor. Her arms cast out / as if preparing to fly / or as if pinned, savior / or specimen.” Chatti too is one of Laux’s former NC State students.

“Dorianne Laux deeply cares about her students," says poet and NC State colleague Eduardo C. Corral, winner of the Yale Series of Younger Poets award and author of the forthcoming book Guillotine (Graywolf Press). "And the feeling is mutual: her students cling to her words, enjoy her presence in and out of the classroom."

The poetry world turned towards Laux once again just a few days ago, as her book Only As the Day Is Long: New and Selected Poems was chosen as a finalist for the Pulitzer Prize. This most recent honor is just one in a long line of honors that have marked Laux’s career. Her fifth collection, The Book of Men, was awarded The Paterson Prize. Her fourth book of poems, Facts About the Moon, won The Oregon Book Award and was short-listed for the Lenore Marshall Poetry Prize. Laux is also the author of Awake; What We Carry, a finalist for the National Book Critics Circle Award; Smoke; as well as a fine small press edition, The Book of Women.

She is the co-author, with Kim Addonizio, of the celebrated text The Poet's Companion: A Guide to the Pleasures of Writing Poetry. The previously mentioned, Only As the Day is Long: New and Selected, was released by W.W. Norton in early 2019. She has received fellowships from the Guggenheim Foundation and the National Endowment for the Arts, and has been a Pushcart Prize winner.

In addition to teaching in NC State’s MFA in Creative Writing Program, Laux has taught at the University of Oregon and Pacific University and has led summer workshops at Esalen in Big Sur.

The Dorianne Louise Laux Papers contains a diverse array of materials that document her career as a student, poet, and professor in creative writing from 1968 to 2019. The archive includes published works; manuscript materials, including several proofs of the Pulitzer Prize finalist manuscript for Only As the Day Is Long: New and Selected Poems; personal and professional correspondence; newspaper clippings and articles; datebooks and calendars; teaching and workshop materials; photographs; literary festival and conference materials; audiovisual recordings of poetry readings; and promotional materials.

For Laux, her most prized possessions in the archive are the correspondence. “I have correspondence from some wonderful poets—Philip Levine, Sharon Olds, Gerald Stern, Jack Gilbert, Jane Hirshfield, Kim Addonizio, Marie Howe, Tony Hoagland” and others, including “a good number of students.” She notes that “it was difficult to give them up. I’ve carried them around for so many years and have read and re-read them many times. But, it was time.”

She’s also excited to share the “drafts of book manuscripts with notes from many of the poets above as well as personal journals, videos, audiotapes and photos of the poets I’ve known. I’m still gathering things from my office at NC State, so I may have more teaching materials there.”

These sorts of materials in other poets’ archives were important to Laux’s own development as a poet: “I have been to see sections of Philip Levine’s archive at the New York Public Library and was thrilled to see original manuscripts and letters,” she notes, adding “I also got to see Emily Dickenson’s digital archives and a lock of Edna St. Vincent Millay’s flame-red hair, the letters and poems written on scraps of paper or envelopes, snapshots and videos and audio recordings.”

Laux appreciates the access these archives provide future readers and writers and researchers into the lives of such poets: “There’s something about seeing that poets you loved struggled as you did, misspelled words, got dates wrong, were shy or bombastic and said silly things, and wise things, and beautiful things. To have a window into their ordinary and extraordinary lives is a gift.”

The NC State University Libraries seemed like a perfect fit to Laux. “I love that this library is so beautiful, welcoming, and state of the art, and one of the most revered libraries in the nation,” she says, also pointing out that the staff in the SCRC, “care about what they do, and are doing, to preserve, and make available, the written word.”

"I’m not surprised she donated her papers," notes Corral. "This is her caring for future NC State students who’ll still be able to learn from her and her work.”

Laux adds that the SCRC, “made the process easy for me, coming to my home in a rainstorm with a truck to pick up box after heavy box, taking them to the library and sorting them, sending me lists of what they didn’t need and returning it. They were all just so careful, gracious, and grateful!”

While it was hard for Laux to part with such meaningful and personal materials, ultimately she was “so grateful to get them out of my house! And grateful to have a place for them to go where they could live and breathe. Also, NC State has given me so much enduring joy—my colleagues, my students, the opportunities—and made it the most memorable place I have taught.”