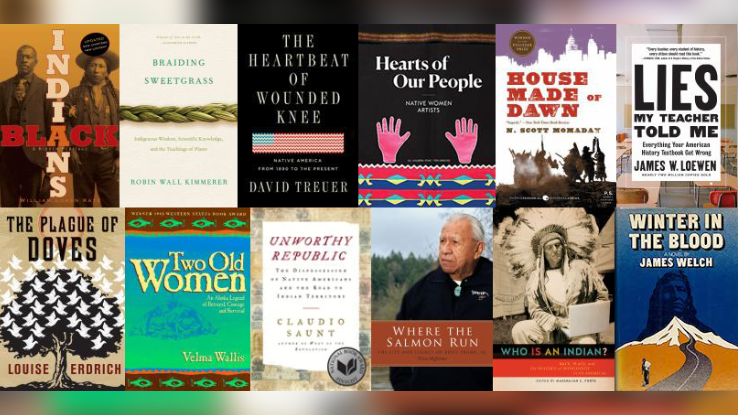 In honor of Native American Heritage Month, check out the Popular Reading Area display in the Hill Library Learning Commons with the following books.

Unworthy Republic : The Dispossession of Native Americans and the Road to Indian Territory
Claudio Saunt
In May 1830, the United States formally launched a policy to expel Native Americans from the East to territories west of the Mississippi River. Justified as a humanitarian enterprise, the undertaking was to be systematic and rational, overseen by Washington, DC's small but growing bureaucracy. But as the policy unfolded over the next decade, thousands of Native Americans died under the federal government's auspices, and thousands of others lost their possessions and homelands in an orgy of fraud, intimidation, and violence. Unworthy Republic reveals how expulsion became national policy and describes the chaotic and deadly results of the operation to deport 80,000 men, women, and children. 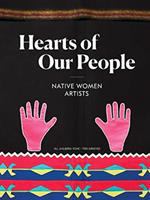 Hearts of Our People : Native Women Artists
Jill Ahlberg Yohe and Teri Greeves, curators; Laura Silver, editor
Hearts of Our People: Native Women Artists explores the artistic achievements of Native women and establishes their rightful place in the art world. This landmark book includes works of art from antiquity to the present, made in a variety of media, from textiles and beadwork to video and digital arts. It showcases artists from more than seventy-five Indigenous tribes to reveal the ingenuity and innovation that have always been foundational to the art of Native women. Women have long been the creative force behind Native art. Hearts of Our People accompanies the first major exhibition of artwork by Native women, presented in close cooperation with top Native women artists and scholars, honoring the achievements of over 115 artists from the United States and Canada spanning over 1,000 years. Their triumphs—from pottery, textiles, and painting, to photographic portraits, to a gleaming El Camino—show astonishing innovation and technical mastery.

Who is an Indian?: Race, Place, and the Politics of Indigeneity in the Americas
Maximilian C. Forte, editor
This collection examines the changing roles of race and place in the politics of defining Indigenous identities in the Americas. Drawing on case studies of Indigenous communities across North America, the Caribbean, Central America, and South America, it is a rare volume to compare Indigenous experience throughout the western hemisphere. The contributors question the vocabulary, legal mechanisms, and applications of science in constructing the identities of Indigenous populations, and consider ideas of nation, land, and tradition in moving indigeneity beyond race.

Lies My Teacher Told Me : Everything Your American History Textbook Got Wrong
James W. Loewen
Since its first publication in 1995, Lies My Teacher Told Me has become one of the most important—and successful—history books of our time. Having sold over two million copies, the book also won an American Book Award and the Oliver Cromwell Cox Award for Distinguished Anti-Racist Scholarship and was heralded on the front page of the New York Times in the summer of 2006. For this new edition, Loewen has added a new introduction that shows how inadequate history courses in high school help produce adult Americans who think Donald Trump can solve their problems.

Black Indians : a hidden heritage
William Loren Katz
The compelling teen nonfiction account of how two heritages united in their struggle to gain freedom and equality in America. Since its original publication, William Loren Katz's Black Indians has remained the definitive work on a long, arduous quest for freedom and equality. This new edition features a new cover and includes updated information about a neglected chapter in American history.

House made of dawn
N. Scott Momaday.
A young Native American, Abel has come home from war to find himself caught between two worlds. The first is his father’s world, wedding him to the rhythm of the seasons, the harsh beauty of the land, and the ancient rites and traditions of his people. But the other world—modern, industrial America—pulls at Abel, demanding his loyalty, trying to claim his soul, and goading him into a destructive, compulsive cycle of depravity and disgust.

Where the salmon run : the life and legacy of Billy Frank Jr.
Trova Heffernan
Where the Salmon Run tells the life story of Billy Frank Jr.—an early participant in the fight for tribal fishing rights during the 1960s—from his father's influential tales, through the difficult and contentious days of the Fish Wars to today. Based on extensive interviews with Billy, his family, close advisors, as well as political allies and former foes, and the holdings of Washington State's cultural institutions, we learn about the man behind the legend and the people who helped him along the way.

Winter in the blood
James Welch
The author of Fool's Crow and Indian Lawyer presents an extraordinary, evocative novel about a young Native American coming to terms with his heritage—and his dreams.