What to know about the Libraries: Winter Break 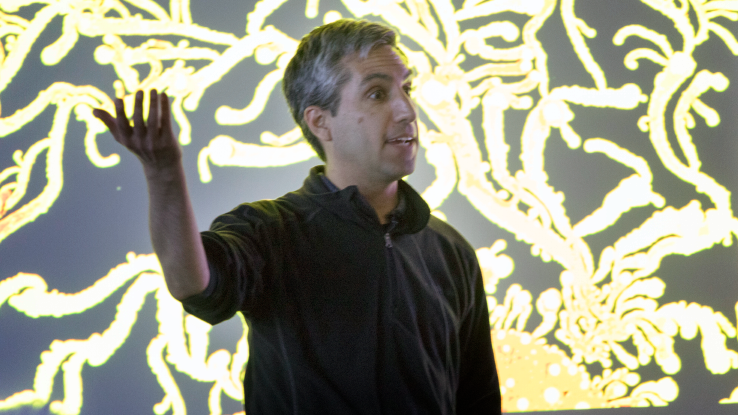 The 2020 NC State University Libraries Faculty Award has been given to Carlos Goller, associate teaching professor in the Biological Sciences department.

The Libraries Faculty Award is given to an NC State faculty member who has contributed consistently and notably to the accomplishment of the Libraries' mission, vision, and strategic initiatives. The award, established in commemoration of the Libraries’ centennial year in 1989, enables the Libraries to recognize faculty contributions.

Goller has worked with the Libraries in a number of citizen science contexts, including an extended collaboration on the spring 2018 Wolfpack Citizen Science Challenge. He has also taught visualization workshops at the Libraries and given a talk in the Coffee & Viz seminar series.

Nominator Karen Ciccone, Department Head of Data & Visualization Services at the Libraries, writes, “Carlos is a delight to work with and an exemplary faculty partner. As an enthusiastic partner for the Wolfpack Citizen Science Challenge, ‘Where's Delftia?’, he came to us with a proposal for a campus-wide citizen science treasure hunt for a microbe that lives all around (and on) us—Delftia acidovorans. In his words, ‘the microbe that poops gold and laughs in the face of mouthwash!’ How could we resist. The project engaged hundreds of students in introductory environmental science classes and continues to be incorporated into university courses.”

In a message of thanks to the Libraries, Goller reciprocated that praise: “I am honored and speechless. Thanks to the NC State University Libraries, we've been able to engage students and courses in really fun projects. Every interaction I have with my [Libraries] partners (much more than that!) results in fun and creative ways to generate and share knowledge. You've helped us craft data management plans that our NSF Program Officer described as ‘impressive and thoughtful,’ found ways to have hundreds of students swab their campus, and are now helping students produce Open Educational Resources.”

To commemorate Goller’s contributions to the Libraries, a plate bearing his name will be added to the Faculty Award plaque in the Hill Library. In addition, he will be awarded honorary life membership in the Friends of the Library and receive a special certificate of recognition.

The award was to be given in the spring at a Friends of the Library event that was canceled due to COVID-19. Hopefully we’ll be able to safely gather soon to honor Dr. Goller.