Banned Books Onstage is back! 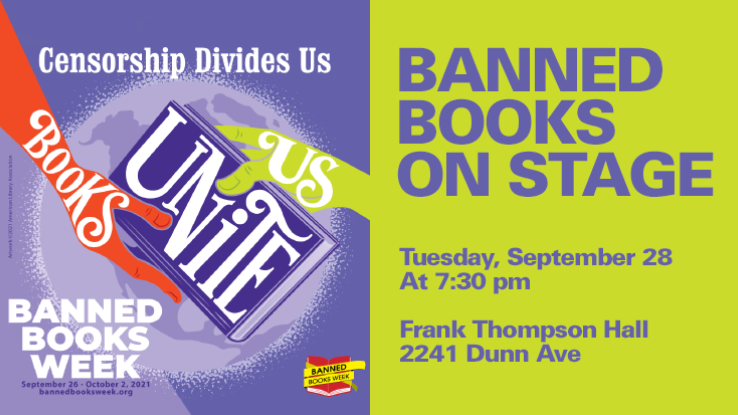 See scenes and monologues from contested books performed live by students on Sept. 28

Since 2011, the Libraries has celebrated Banned Books Week (Sept. 26-Oct. 2) with “Banned Books Onstage” in order to raise awareness about censorship efforts around the country. Talented NC State students from University Theatre present scenes and monologues from banned and challenged books.

Co-presented with University Theatre, Banned Books Onstage returns as an in-person performance on Tuesday, Sept. 28, 7:30 p.m.-8:30 p.m. in Frank Thompson Hall (2241 Dunn Ave.). The event is SOLD OUT so the Libraries will livestream it on our Twitch channel.

This year’s theme is “political issues,” which range across the selected books from sexual assault, structural racism, womens rights, LGBTQ rights, and more. Jessica-Grey Lineberry, a senior at the Poole College of Management and the student director for Banned Books Onstage, feels that education is the glue that holds all those issues together—in order for issues to be dealt with, they have to be talked about.

“When I was browsing the banned and challenged books website, I was inspired by a couple of statements, Lineberry says. ‘The reasons they listed for banning books included ‘put[ting] books in a child’s hand that require discussion’ and the themes were considered ‘too much of a sensitive matter right now.’ To me, this seemed hypocritical. How can you expect students to grow and learn about the world if they are not encouraged to see lots of different points of view and talk with others?”

“Taking these books off the shelves doesn't make the problems go away, it just creates students who are uneducated about the issues they might be facing.”

Scenes from the following books will be performed this year: