“Art’s Work” artist on WUNC’s “The State of Things” 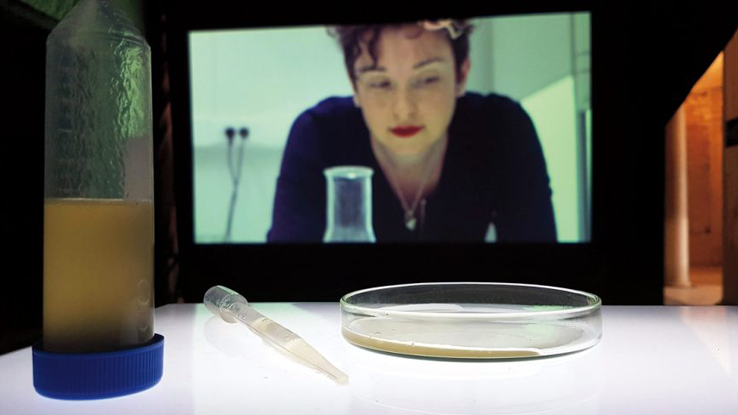 What would it mean if we could create female sperm? Could changes in reproductive biotechnologies affect interpretations of gender? These are the kinds of questions that artist Charlotte Jarvis will talk about in her pre-recorded appearance on WUNC’s “The State of Things” airing Friday, Jan. 10 from 12:20 p.m.-12:40 p.m.

Jarvis’ work is a part of the exhibition “Art’s Work in the Age of Biotechnology; Shaping Our Genetic Futures,” organized by the Libraries and the Genetic Engineering and Society Center and curated by Hannah Star Rogers, currently on view at the Gregg Museum of Art & Design, the Hill Library, and the Hunt Library through March 15.

The Jarvis interview will be available for listening on the WUNC site later the same day.

Jarvis collaborated with scientist Susana Chuva de Sousa Lopes and Kapelica Gallery/Kersnikova Institute to make semen from her (“female”) stem cells. To do this they used induced pluripotant stem cells derived from Jarvis’s blood, altered their chromosomes, and differentiated them into the sperm-producing cells found in male testicles.

Jarvis has written that “throughout history, semen has been revered as a magical substance—a totem of literal and symbolic potency. Patriarchal societies have described semen as ‘life force,’ ‘a drop of the brain,’ and ‘that which sows the seeds of virtue in the female soul.’ In Posse aims to rewrite this cultural narrative by using art and science to disrupt the hierarchy.” The project is presented as part of a contemporary reenactment of the ancient Greek festival of Thesmophoria—a women-only fertility ceremony in honor of the goddesses Demeter and Persephone.