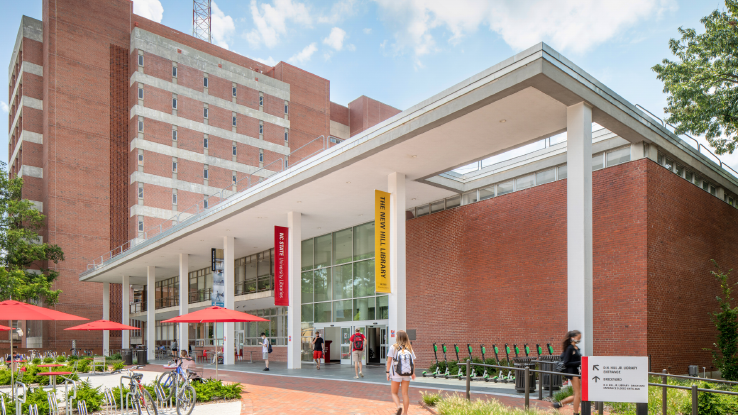 “I want parents and students to be able to reconcile how they feel on the inside with the outside and have the knowledge and the information to know that they're not broken.”

When Alaina Brennan-Kupec arrived at NC State in 1987, she didn’t know why she felt the way she did. So she went to the library.

“I remember going to the Hill Library as a freshman and searching through the Dewey Decimal card index, trying to find out, personally, what can I find to explain why I feel the way I do?” Alaina says. “I can't be the only person who feels this way. There must be something, some kind of resource that I can find, to educate myself about why I feel one way on the inside, but my body is another way on the outside.”

She couldn’t find any library resources to help her better understand, which is why she and her wife Kathy Brennan-Kupec gave the NC State University Libraries a major gift on Day of Giving to create the Alaina and Kathleen Brennan-Kupec Transgender Collection Endowment to support a collection of transgender-positive materials. The couple hopes that the collection will provide factual knowledge for today’s students who have those same questions and feelings that Alaina did as an undergraduate.

“For a lot of people who might be on their own personal journey—whether you're a student at the university, whether you're a parent and employed by the university, faculty, facilities, whatever you may be—you may need to try and access resources,” Alaina, now a nationally known transgender community advocate, says. “I want people to have access to information that helps them understand. I've talked with the Libraries about making things accessible in a way that they don't have to necessarily out themselves, that they will be available in the open stacks.”

While Alaina’s motivations for creating a transgender-positive collection come from her personal history and public advocacy, Kathy sees the collection through a librarian’s lens. An information scientist with a Master's of Science in Library and Information Science from Catholic University and a Ph.D. in Information and Library Sciences from UNC-Chapel Hill, Kathy is currently a Senior Researcher at Google.

“We want to make sure that we leave it up to the librarians to have full authority and power to apply their intellect and their creativity to acquiring materials that will enable anyone who's personally wondering about their own gender identity, and for anyone who's interested in doing research to understand it better from a scientific perspective,” Kathy says. “We really want people to be able to get correct and accurate information.”

The collection will not only provide reliable and accurate information; it will also combat negative and harmful disinformation about transgender people that has politicized their sheer existence. Some anti-trans medical associations feign legitimacy with reputable-sounding names, but upon a closer look, there might only be 100 people in the association or they might be solely funded by anti-trans political organizations. By focusing the collection on peer-reviewed and vetted materials, the Brennan-Kupecs hope to protect its content from political bias.

“In all the reputable science journals and medical associations, there's no doubt in any of their published stances about what it means to be transgender,” Alaina says. “But there are fringe, anti-transgender organizations who try and portray people who are transgender as something ‘less than’ or ‘other.’ There are people that appropriate the whole topic of being transgender for their own personal and political gain.”

“By making sure that the collection specifies ‘transgender-positive,’ it hopefully keeps those political forces out of trying to influence what could potentially be put into the collection. If we hold ourselves to a high academic standard of peer-reviewed journals and what's considered reputable by recognized experts in the field, they're all going to say largely the same thing—that being transgender is just part of who we are. There's nothing wrong with us. We're not broken.”

Alaina’s public advocacy for the transgender community was prompted by the 2016 passage of HB2—the “bathroom bill”—while she and Kathy were living in North Carolina. She appeared in the first nationally aired transgender awareness ad, depicting her being denied the use of a women’s restroom. After the couple relocated to the New York City area for work, Alaina was again called to activism against President Trump’s 2017 transgender military ban.

Alaina and Kathy now live in Vero Beach, Florida, with their three sons. Currently Senior Director of Portfolio Strategy & Analytics at Gilead Sciences, Alaina graduated cum laude from NC State with a BS in Political Science, where she was honored as the 1992 Naval ROTC Honor Graduate. Upon her graduation, she served in the U.S. Navy as an Intelligence Officer in a FA-18 squadron, where she was recognized as the 1994 Ground Officer of the Year and received two Navy Achievement Medals for her leadership. A frequent speaker to organizations and the media, as well as a writer about transgender rights and policy, Alaina was named the 2016 Transwoman of the Year by Transwomen National and was recognized by the Human Rights Campaign as one of North Carolina’s 2016 People of the Year. She serves as the co-chair of the Board of Directors for the Transgender Legal Defense & Education Fund, a national nonprofit committed to ending discrimination based upon gender identity and expression.

Alaina and Kathy see access to good information as an equally important way to help end discrimination. A trans-positive Libraries’ collection that can grow over time fulfills that vision.

“Today, we have amazing digital resources and audio resources and video resources,” Kathy says. “But if you are someone who's doing research at the scholarly level, it's really important to be able to access full collections. That's part of my personal vision for this, to create the most robust collection we can create—maybe it will be the biggest collection of transgender materials in North Carolina or maybe even beyond that.”

“For someone who is engaged in a scholarly endeavor, being able to go right to a library and get that resource even if it's something that was maybe written 100 years ago and is only available in microfiche or someone has to photocopy it out of a book, if you can go to the library and get it or you can have it emailed to you, that's incredible.”

Alaina shares Kathy’s scholarly aspiration for the collection. But it’s also very personal for her, too.

“It took me 40 something years of my life to finally come to terms with it and accept who I was and make the decision to live as myself honestly and authentically,” Alaina says. “I don't want people to have to wait until they're in their 40s to do that. I want parents and students to be able to reconcile how they feel on the inside with the outside and have the knowledge and the information to know that they're not broken.”