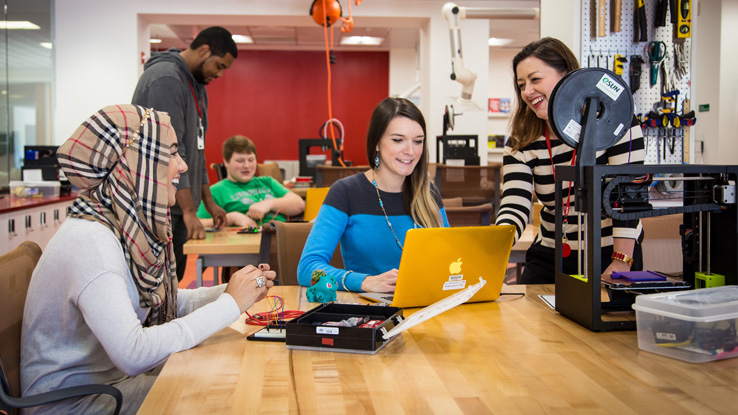 (Raleigh, NC) - Recognizing its array of programs and commitment to outreach, the Special Libraries Association (SLA) has given the 2016 Springshare Innovation in Academic Libraries Award to the NCSU Libraries’ Makerspace at the D. H. Hill Jr. Library. 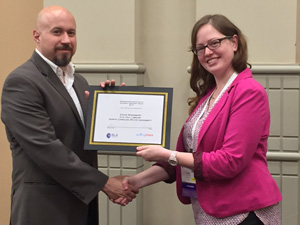 The award, as selected by the SLA Academic Division committee, honors new programs or services that demonstrate an innovative approach to academic librarianship. Heidi Tebbe, Collection Manager for Engineering and Data Science at the Libraries, accepted the award on the Makerspace team’s behalf at a June 13 reception at the SLA Annual Conference in Philadelphia.

The SLA committee acknowledged how NC State as a whole has responded to the quality of the D. H. Hill Jr. Makerspace’s web presence and training sessions, as signified by its programs’ integration into curricula. They also praised the Libraries’ use of assessment and attendance tracking to best meet the needs of constituencies beyond traditional communities associated with makerspaces.

The D. H. Hill Jr. Makerspace provides access to, and training for, a wide variety of making technologies and tools otherwise unavailable to students outside labs and studios, such as 3D printers and scanners, sewing machines, milling machines, a laser cutter, computers, hand tools, and soldering irons. The space also stocks project materials: electronics, microcontrollers such as Arduinos, fabric, conductive thread, glue, and filament for the 3D printers. An average of 645 people per week used the Hill Makerspace during the 2015 fall semester.

The award comes with a $500 prize, donated by Springshare--a library technology company. The Makerspace plans to use the prize money to underwrite materials costs for future student workshops.