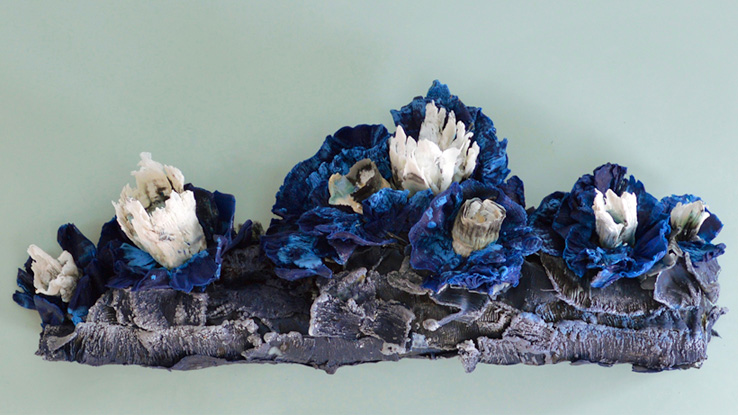 A Thousand Galaxies (imagining organic life outside the Milky Way)

Alien species have invaded the James B. Hunt Jr. Library!

Artist Miella Green makes sculptural works of imagined life forms from other parts of the universe out of encaustic--a mixture of beeswax and pigment. Eleven weird and wonderful works from her project A Thousand Galaxies, made while serving as Artist-in-Residence in NC State’s Rob Dunn Lab, will be on display on the Hunt Library Commons Wall from August 29 to September 4.

Green describes A Thousand Galaxies as “a visual scientific field journal” of life that botanists and naturalists might collect on an interstellar journey. When the project is complete, it will include 1,000 artworks, representing species from .000001% of the 100,000,000,000 known galaxies. Many works from the project are viewable on Green’s website.

At the Dunn Lab, Green has worked alongside entomologists and other scientists, finding inspiration in their research and knowledge base. Dunn Lab research projects often exhibit an artist-like curiosity about the world, asking questions about the health of bees, the microbial life in human armpits, and the insights that can be gleaned by considering one’s shower head as a microbiome.

Encaustic allows Green to make textures and tonalities that evoke organic surfaces such as skin, leaf, and shell. Using a blowtorch and heat gun, she works with the beeswax in a molten state. The final artworks look like sculptures, but they’re technically paintings. Green doesn’t shape the beeswax into forms; instead, she applies hundreds of thin layers to build up the forms.

Throughout A Thousand Galaxies, Green disorients your sense of scales to an extreme degree. One sculpture might resemble bacteria or diatoms seen through a microscope, but suddenly they look like a telescopic view of distant nebulae or solar systems. Other pieces are singular and familiar, acknowledging plant forms like lilies and seaweed or undersea wonders such as jellyfish, corals, and anemones. Still other works are completely inorganic abstractions, resembling nothing in our terrestrial sphere.